How to REALLY do squats, rows and lunges: Personal trainer reveals the most common injury-causing mistakes for eight gym exercises

From shoulder strains and slipped discs, gymgoers face the risk of agonising injuries if they exercise wrongly.

But now a personal trainer has given a helping hand to millions, in hope of stopping them being left with crippling aches.

Ben Camara, owner of the chain No1 Fitness in central London, has revealed exactly how you should perform eight common exercises.

In a MailOnline exclusive, he has explained the correct, and incorrect, ways of squatting, lunging and rowing.

Barbell back squat – back injury 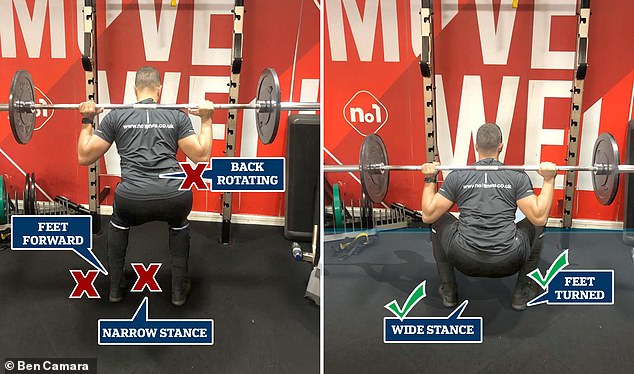 Wrong: A narrow stance and feet facing forward can cause the back to rotate. Correct: Widening the stance and turning the feet out protects the back and helps you to get lower

In an ideal squat, the hips are lower than the knees and the thighs are parallel to the ground. Adding extra weight strengthens the muscles.

Mr Camara said: ‘Generally people are told to keep their feet straight with a hip width stance – but this is not correct.’

In this position, the hips and back could twist to the side, which can be problematic for the lower back. Pain may not be immediate but arise later on.

Mr Camara said: ‘If your hips are rotating left but your lower back is not, or even worse going right, the lower back ligaments and discs will put pulled or even popped out of place.

‘Imagine a door with two hinges: if you pull the top of the door down and keep yanking it, that hinge – which is designed to just go left and right on one trajectory – will start to bend and break.’

To avoid this, make sure your toes are pointed out slightly.

After adjusting the toes outwards, ‘have your knees tracking over your toes, and this will give your hips, particularly your pelvis, enough room to come down without tucking under or coming to the side’.

Mr Camara said some people may be able to safely squat with their feet in a neutral position if they are flexible – but this is unlikely.

If you are unsure, go through it with a trainer. 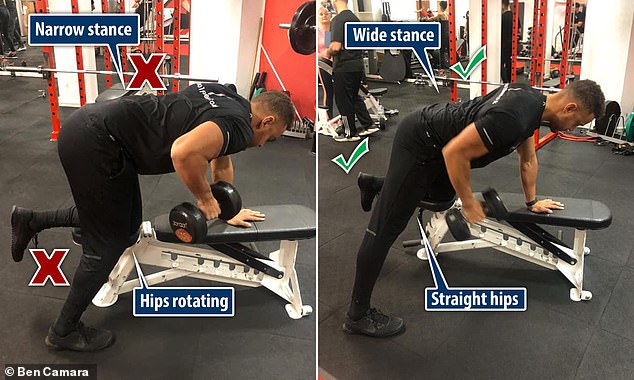 Wrong: If the stance during a single arm row is too narrow, it can cause the hips to rotate. Correct: Widening the stance will help to keep the hips straight

Done correctly, a single arm row will strengthen the back.

But without perfecting the form, it can lead to overloading the lower back with weight, which causes pain.

‘When you have your foot too close to the bench, there is a real good chance you are rotating the hips and thus putting a lot pressure through the lower back,’ Mr Camara said.

‘Have a good solid stance and bring the standing leg on the ground out to the side and make a pyramid shape.

‘From there you can straighten the back, keep the hips straight and focus on the row.’

Your hips need to remain square and facing the ground at all times. Squeezing your stomach muscles – known as core activation – will help with stability.

At the top of the row, squeeze your shoulder blades and back muscles to prevent your upper back rounding. 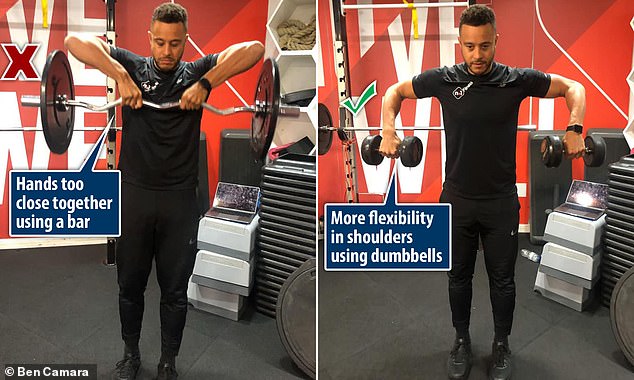 Wrong: When the hands are too close together on a bar, there is less mobility in the shoulder. Correct: Using dumbbells allows for flexibility

Although it’s used to build the shoulder muscles, an upright row can also be detrimental to the ligaments.

Mr Camara said: ‘This exercise has been kind of demonised because it can damage the shoulder.

‘It usually involves a bar. As you bring the bar up, because your hands are in a fixed position, it could have an impingement on the shoulder joint, specifically pinching the supraspinatus tendon which runs through that area.

‘As an alternative, grab two dumbbells and do a rowing situation which enables the shoulder joint to move freely rather than having a close grip beneath the chin.’ 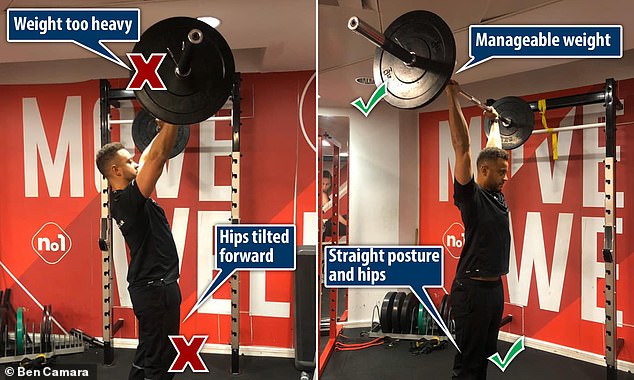 Wrong: The most common mistake is lifting too heavy. This can cause the hips to tilt forward. Correct: using a manageable weight and keeping a straight posture

With any heavy weight or repetitive overhead motion, there is an increased risk for shoulder injuries.

‘The first is ego taking over and a person tries to lift too much and they aren’t able to push the weight just using the arms.

‘Then the shoulders can’t support it on the way down.’

The second problem is the hips tucking underneath the body. Mr Camara said people tend to do this without realising as a means of compensating for their heavy weight.

He said: ‘With a lower weight, you can control the movement better. It means you have more mobility to press the weight correctly above the head.’

If you are new to the overhead press, you should start seated against an inclined bench with dumbbells. 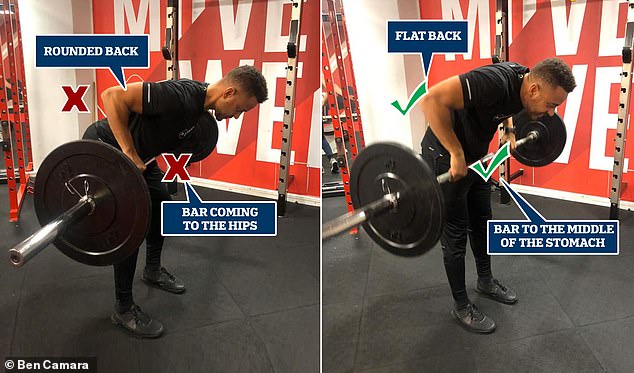 Wrong: Rounding or rotating the back while in the rowing position. Correct: Flat back and bringing the bar to the middle of the stomach

Mr Camara said: ‘For this exercise, a lot of focus is on ensuring you aren’t rotating or rounding the back while in a flexed position.

‘Rotation in the back while you are bent over is where the damage is caused, mostly to the lumbar spine.’

The lumbar spine refers to the lower back, where the spine curves inward toward the abdomen. An injury can damage the tendons and muscles in the lower back.

Sudden twisting can cause injury to this area, and certain risk factors for it include excessive curvature of the back, a weak back, or weak abdominal muscles.

To ensure perfect form, start by assuming a deadlift position with your back flat, chest up, and shoulders pulled down and back.

Deadlift the weight close to the body and then row with a flat back and neck in line with the spine. Then lower the bar by straightening the arms.

‘Make sure you have a stable stance and bring the bar just above the abdominal region to the middle of the stomach,’ Mr Camara said.

Just above the belly button is the ideal spot to bring the bar to.

Wrong: If the dumbbell is in the same hand as the working leg, the hips can rotate and cause pressure in the lower back. Correct: Alternate hand to leg will keep the hips neutral and back straight

If you’re doing a single leg RDL, to strengthen the glute muscles and hamstrings, the dummbell should be in the opposite hand to the leg that is raising.

All too often, Mr Camara has seen people doing this movement with the dumbbell in the same hand as the leg that’s working, rendering the move completely pointless.

‘The causes too much rotation in the hips,’ Mr Camara said.

‘This will shorten the glute, when you want to be lengthening the glute, and you also see pressure through the lower back which can cause pain.’

Have the dumbbell in the opposite hand, which will counterbalance the weight through the body.

‘Using gravity, you can control the hip and movement down so you load the glute correctly,’ Mr Camara said. 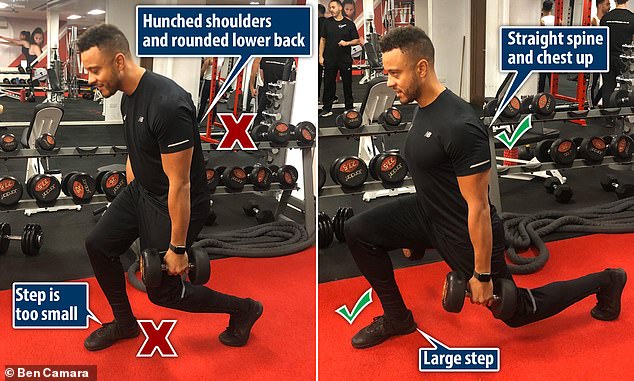 Wrong: Small step and compensation by rounding the shoulders and lower back. Correct: A large step and ‘kite’ position in the back – straight spine and chest up

Although the lunge is one of the simplest movements in the book, you’d be fooled to believe it doesn’t require practice.

Mr Camara said: ‘People don’t give their hips enough distance between and they can’t get their knee to the floor.

‘So they start to round their shoulders and lower back to try and get that depth.

‘Make sure you’ve got enough room from the front foot going forwards, chest up, shoulders wide.

‘We call it the kite position – imagine a kit through your spine, shoulders wide and spine tall.’

Another tip is to keep the heel of the back foot firmly on the ground to aid you coming back up. Otherwise you can bend your upper body backward too far.

Another common error with lunges is allowing the front knee to lean too far over the toes, which puts a lot of stress on the knee. 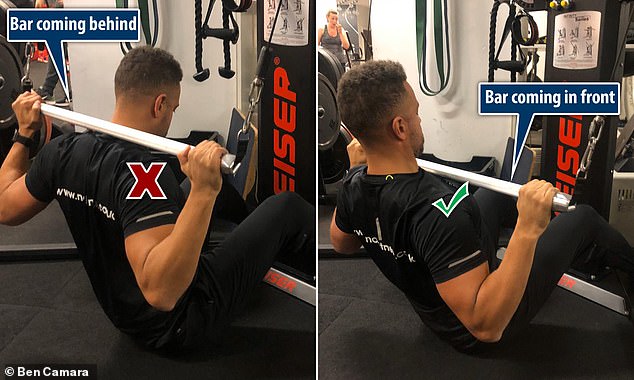 Wrong: Pulling the bar behind the neck causes strain as you push the head forward. Correct: The bar comes to the front of the chest

Mr Camara said: ‘Often I see in the gym people putting the weight extremely heavy and pulling down behind the neck.

‘This causes a lot of strain on the shoulder joint and neck and is not a natural position to be in.’

When people perform the lat pulldown behind the neck, they tend to bend their head forward as they bring down the bar, which puts strain on the neck and shoulders.

To perform the lat pulldown correctly, lean a little bit back from the hip joint.

Keep the shoulder blades back and down, and pull the bar down towards your chest.

Keep your spine in a neutral position and engage your core muscles throughout the exercise to protect your back.

HOW DO YOU PERFORM THE PERFECT DEADLIFT?

Ben Camara, personal trainer at No1 Fitness in central London, explains how to do a deadlift.

Set the barbell with appropriate weight plates – depending on fitness level – on the floor.

Beginners usually start lifting just the barbell, since a typical barbell weighs between 25 and 45 pounds on its own.

Walk towards the bar – do not pull it towards you – so your shins are resting against it.

With your feet flat beneath the barbell shoulder width apart, the bar should be at the midpoint of your foot as though cutting it in half. 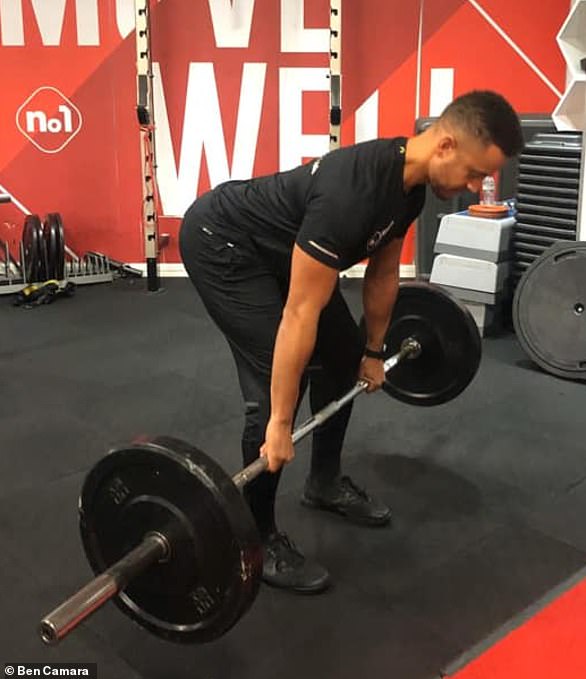 Keep the bar close to the legs when you are lifting

Squat down as if about to sit on a chair, and grasp the bar with your hands roughly shoulder-width apart.

Lift your chest up, pull your shoulders back and look straight ahead rather than up or down. This is called setting, when you make sure you are in the correct position before lifting.

Lift the bar, keeping it close to your legs and focus on taking the weight back onto your heels rather than forward into your toes.

The back should be completely flat and straight.

Lift to thigh level while engaging the glutes and hamstring, pause, then return under control to the start position.