Back in 2009, a group of Israeli researchers identified a herd of Awassi sheep suffering from “day blindness”. As its name implies, these sheep were blind during the day (in bright light) but could see at night, in low-light conditions.

As published in Human Gene Therapy, a team led by Hebrew University of Jerusalem Koret School of Veterinary Medicine Professor Ron Ofri, Professor Eyal Banin of Hadassah Medical Center and Professor Elisha Gootwine of the Volcani Agricultural Research Organization, found that these sheep suffered from a genetic mutation that causes “hereditary achromatopsia,” the scientific term for day blindness. Achromatopsia is prevalent in human beings, as well. However, due to its hereditary nature, the rate of this disorder fluctuates from population to population, being more prevalent in places with a high rate of marriages between relatives. In Jerusalem, for example, day blindness affects 1 in every 5,000 people.

Prof. Ofri and his colleagues began gene therapy trials for the “day blind” sheep, with the help of Professor W.W. Hauswirth of the University of Florida. Affected sheep were injected with a virus that carried a normal copy of the missing gene. It was a success; the treated sheep were regained their day vision, while those not treated remained visually impaired. 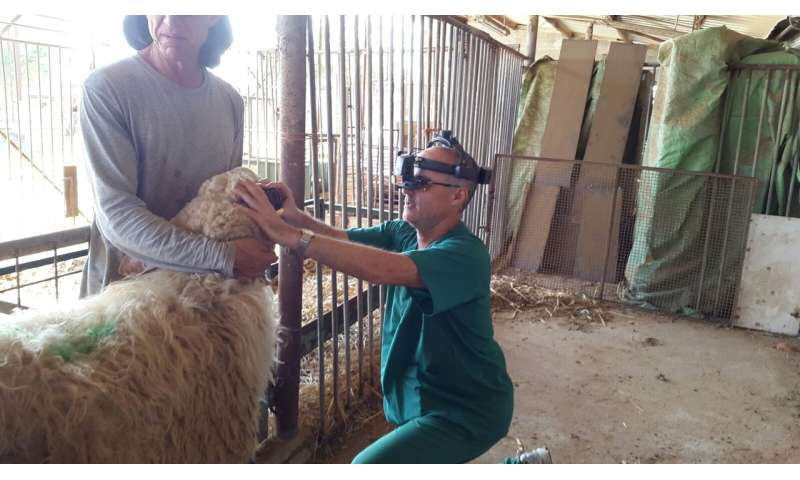 Based on these promising findings, the FDA has approved clinical trials for human patients and several U.S. medical centers have already begun using this therapy to treat patients with achromatopsia.

Recently, Israel’s Ministry of Health approved human clinical trials in Israel. They will begin later this year at Hadassah Medical Center. “Less than ten years after we first discovered the vision-impaired herd, we began human clinical trials. This marks a wonderful feat in ovine-to-human and research-to-cure efforts”, shared Professor Ofri.

Most promisingly, the oldest surviving sheep from the original study still have daytime vision thanks to a single dose of gene therapy administered to them six years ago.