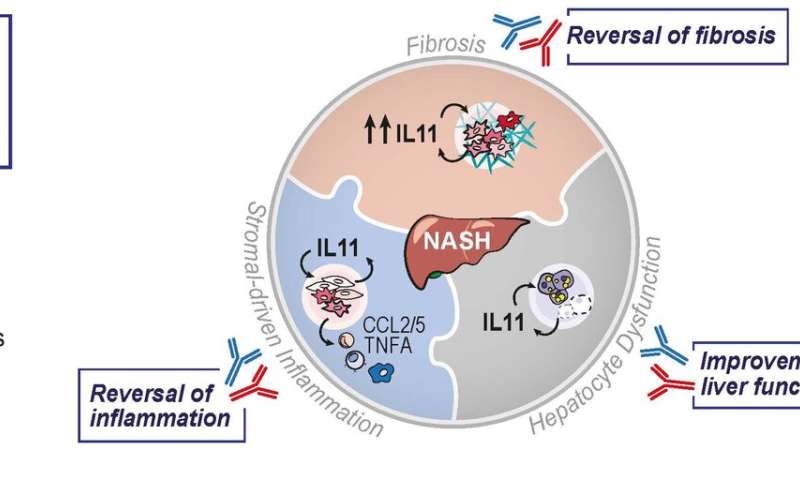 A team of researchers led by Duke-NUS Medical School and National Heart Centre Singapore (NHCS) found that deactivating the interleukin 11 (IL11) protein with therapeutic antibodies reverses inflammation and scarring of the liver in patients suffering from untreatable non-alcoholic steatohepatitis (NASH). The findings, published in Gastroenterology, have implications for the development of drugs to treat the disease.

Fatty liver disease is very common in Singapore and affects approximately one in four people around the world. People with diabetes and obesity are particularly at risk. Fatty liver disease can progress to cause liver inflammation, fibrosis and NASH, which increases the risk of liver failure. There is currently no treatment for fatty liver disease and NASH, and drugs tested in patients thus far have failed to work.

“We questioned whether the IL11 protein is important for fat accumulation, scarring and inflammation of the liver due to the overconsumption of fatty food and sugary drinks. Our team found that this protein is very important for these processes, and inhibiting it can not only prevent fatty liver disease but also reverse it after it has taken hold of the liver,” said Dr. Anissa Widjaja, senior research fellow at Duke-NUS’ Cardiovascular and Metabolic Disorders (CVMD) Programme and first author of this study.

The team found that the IL11 gene triggers the development of NASH and fat accumulates in the livers of people with the condition. It is most common in people who are obese and diabetic, and causes fatigue, abdominal pain, itchy skin, nausea, and can ultimately lead to liver cirrhosis or cancer. The therapeutic antibodies developed by Duke-NUS and NHCS researchers inhibited IL11 in a pre-clinical model that mimicked the human form of NASH, preventing and reversing liver inflammation, and even leading to lower blood levels of cholesterol and glucose.