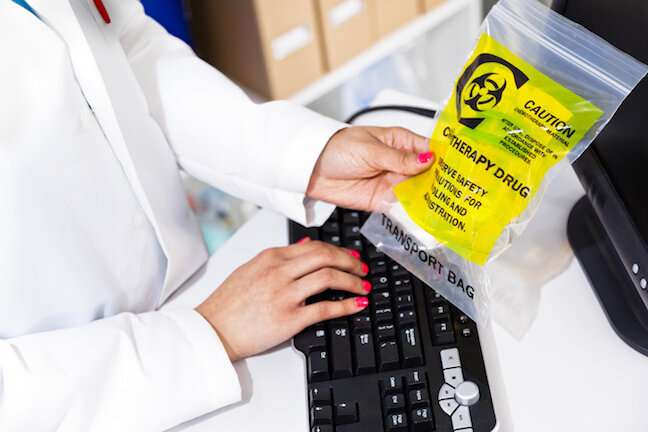 Chemotherapy drugs have been used to treat cancer since the 1950s. While the drugs are often lifesaving for cancer patients, they are also linked to reproductive problems, breast cancer and other health issues in the medical staff who work with the medications. To help protect health care workers, the University of Minnesota School of Public Health conducted a survey to track how chemotherapy drugs are handled in hospitals and identify work surfaces that could be contaminated by them.

The results of the survey, led by Assistant Professor Susan Arnold and Ph.D. student Hannah Kaup, were published in the Journal of Occupational and Environmental Hygiene. The survey is the first step in ongoing research by Arnold aimed at reducing medical staff exposure to chemotherapy drugs.

The researchers tracked how pharmacy technicians and nursing staff handled the drugs by visiting two chemotherapy infusion centers. One center was in a large urban hospital and the other inside a smaller, regional clinic. The researchers chose the clinics to be inclusive of different settings and determine if there were significant differences between how each handled the treatment medications. The researchers focused on identifying surfaces that are frequently touched by staff handling chemotherapy drugs, how long they are touched and by whom.

“The nurses work with people who are quite sick and are focused on providing the best care they can,” said Arnold. “They have a lot to keep track of and it’s a busy, complicated environment. Plus, nurses may have received different kinds of training from other centers. There can even be conflicting regulations for working with medications and procedures.”

The researchers said that, overall, it’s important to understand the variability in how chemotherapy drugs are handled because they can help to identify where staff may be exposed to the chemicals. Understanding the variability also reveals whether the exposures are due to staff-to-staff or staff-to-patient interactions, which can provide avenues for enhancing health care worker training.