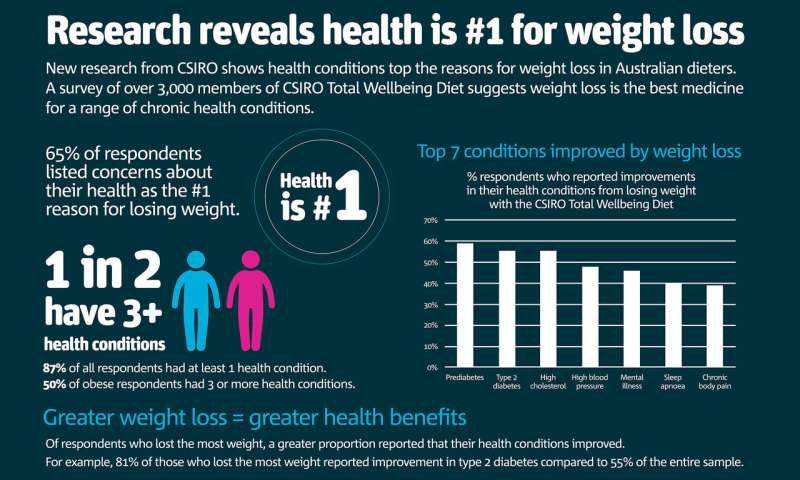 A new report by Australia’s national science agency, CSIRO, suggests that when it comes to weight loss, people are more motivated by improving their health than their appearance, with two out of three people motivated to start a diet because of ‘health concerns.’

The survey of more than 3000 CSIRO Total Wellbeing Diet online members also found around half of people who lost weight through the scientifically-developed diet reported improvements in chronic health conditions such as type 2 diabetes and high cholesterol.

The improvement in chronic health conditions often corresponded with a reduction in prescription medicines.

Survey respondents who reported taking regular medication for one or more chronic conditions saved an average of approximately $270 per year in reduced medication costs. Respondents with three or more conditions reported yearly savings of $460 per condition since starting TWD.

“Almost nine out of 10 survey respondents who were largely overweight or obese reported a pre-existing health condition at the commencement of the program, while 43 percent had been diagnosed with three or more chronic health conditions,” she said.

“Our analysis showed that after following the CSIRO Total Wellbeing Diet program, more than half of those with pre-diabetes, type 2 diabetes and high cholesterol reported an improvement in their health conditions.

“Obesity is a major contributor to many chronic diseases and symptoms—around four out of five people who reported conditions such as diabetes, pre-diabetes and sleep apnoea were classified as obese,” Dr. Hendrie said.

With two-thirds of the Australian adult population now overweight or obese, CSIRO Director of Health and Biosecurity, public health physician and GP, Dr. Rob Grenfell encouraged fellow health professionals to use the report as a conversation starter with their patients.

“Discussing the physical and psychological struggles associated with weight loss can be a sensitive, but important conversation for health professionals to have with their patients,” Dr. Grenfell said.

“There is a wide body of research that shows for overweight and obese adults, the greatest health benefits come from losing the first five percent of body weight.

“At CSIRO we are about solving the greatest challenges through innovative science and technology, and critical to improving Australia’s health and wellbeing is understanding what influences individual health decisions.”

“Many also said the program equipped them with greater knowledge, skills and awareness of nutrition, portion sizes and healthy recipes.

“This empowers people to continue the new eating patterns indefinitely and maintain their weight, health and wellbeing for the long-term,” she said.