The differences were observed as both groups were given a simple visual task. The results could suggest that a history of minor but repeated blows to the head can result in compensatory changes to the brain as it relates to eye movement function. Or it could show how the hundreds of hours that contact sport players spend on eye-hand coordination skills leads to a reorganization of the brain in the areas dedicated to eye movements.

“The verdict is still out on the seriousness of subconcussions, but we’ve got to learn more since we’re seeing a real difference between people who participate in sports with higher risk for these impacts,” said Port, an associate professor in the IU School of Optometry. “It’s imperative to learn whether these impacts have an actual effect on cognitive function—as well as how much exposure is too much.”

To conduct the study, Port and researchers in the IU Bloomington Department of Psychological and Brain Sciences scanned the brains of 21 football players and 19 cross-country runners using fMRI technology.

The researchers focused on these sports because football is a physical game in which small but repeated blows to the head are common, whereas cross-country is extremely low risk for such impacts. The contact sport players did not have a history of concussion, but these sports are known to lead to repeat subconcussive blows. 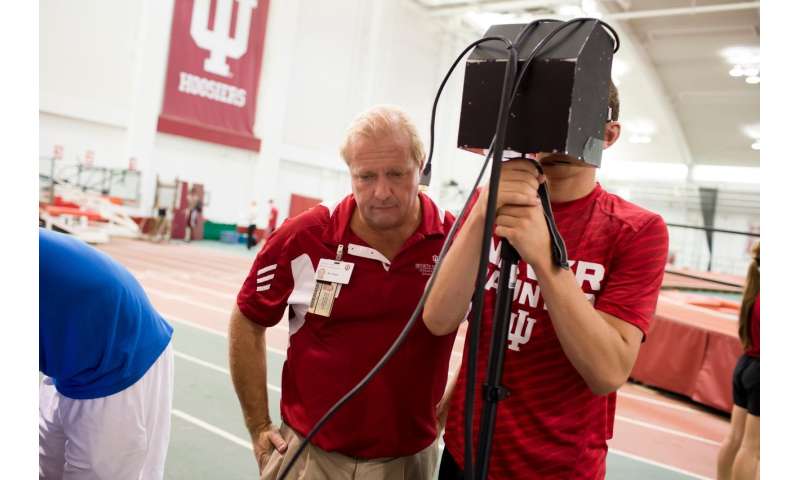 The researchers also scanned the brains of 11 non-college-level athletes from socioeconomic backgrounds similar to the football players to ensure their scan results were not rooted in factors unrelated to their sport.

“We focused on these brain regions because physicians and trainers regularly encounter large deficits in players’ ability to smoothly track a moving point with their eyes after suffering an acute concussion,” Port said.

Although there were clear differences between the brains of the football players and the cross-country runners, Port said interpretation of the study’s results is challenging.

“Everyone from musicians to taxi drivers has differences in brain activity related to their specific skills,” he said. “The differences in this study may reflect a lifetime exposure of subconcussive blows to the head, or they could simply be the result of playing a visually demanding sport where you’re constantly using your hands and tracking the ball.”