People who grew up without green spaces are 50 per cent more likely to develop schizophrenia compared with those who grew up surrounded by greenery.

This is the conclusion of a new study, which is the first to find such a correlation.

Even though a 50 per cent higher risk sounds like a lot, it is worth remembering that schizophrenia still affects less than one per cent of those studied, and one per cent among those who had grown up with few green spaces.

Green spaces include grassy fields, forests, or a field of corn. All types of vegetation count.

“We still don’t understand all of the reasons for schizophrenia, so it’s really exciting and important to have this information,” says Professor Merete Nordentoft from the Department of Clinical Medicine at the University of Copenhagen.

Nordentoft studies the causes of schizophrenia and treatments, and was not involved in the new study.

“I think it’s a great piece of work,” she says.

In the new study, scientists from the Department of Bioscience and the Centre for register research at Aarhus University, Denmark, used satellite photos to map green spaces throughout Denmark between 1985 and 2013.

They then compared these maps with data from Denmark’s national registers for people born between 1985 and 2003 and whether they were subsequently diagnosed with schizophrenia. 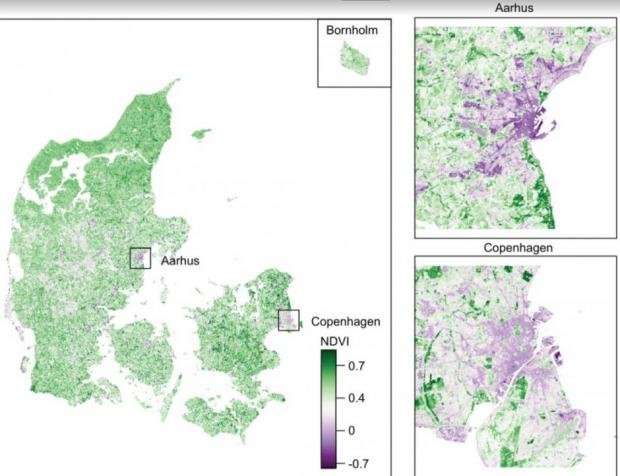 “We can see that those with the least access to green spaces within 210 square metres of where they live, which is pretty close, have a higher risk of developing schizophrenia,” says lead author and Postdoc Kristine Engemann from the Department of Bioscience at Aarhus University.

The study is published in the journal Schizophrenia Research.

An important piece of the puzzle

This does not mean that just because you did not have a view of trees or fields from your bedroom window as a kid that you will automatically develop schizophrenia in adulthood, but it is an important piece of the puzzle to understand all of the factors that can lead to the condition.

“Schizophrenia develops by a combination of many different factors, which increase the risk and ultimately lead to schizophrenia. Our surroundings are apparently one of these factors,” says Nordentoft.

Previous research has shown that city dwellers are more at risk of schizophrenia, but scientists did not know precisely why. It could be related to a lack of green spaces.

However explaining this connection is still tricky, says Engemann.

“Smaller studies have shown that having green spaces provides stronger social cohesion and that you’re more likely to get out and exercise. This can have an effect on your psychological health. So perhaps it is an indirect effect of having green spaces,” she says.

Other studies have shown that children’s cognitive development improves when they are surrounded by more green space, and similarly that people are less likely to suffer from racing thoughts and rumination—a typical symptom of schizophrenia.

Understanding the impact of greenery on human health is ever more important at a time when people increasingly live in cities.