Advanced pancreatic cancer is often symptomless, leading to late diagnosis only after metastases have spread throughout the body. Additionally, tumor cells are encased in a “protective shield,” a microenvironment conferring resistance to many cancer treatment drugs. Now, Salk Institute researchers, along with an international team of collaborators, have uncovered the role of a signaling protein that may be the Achilles’ heel of pancreatic cancer.

The findings, published in Nature on April 17, 2019, show that pancreatic stellate cells—resident cells typically dormant in normal tissue—become activated and secrete proteins to form a shell around the tumor in an attempt to wall off and contain it. The activated stellate cells also secrete a signaling protein called LIF, which conveys stimulatory signals to tumor cells to drive pancreatic cancer development and progression. Results also suggest LIF may be a useful biomarker to help diagnose pancreatic cancer more quickly and efficiently.

“There haven’t been very many advances in pancreatic cancer therapy because it’s a difficult cancer to diagnose and treat,” says Salk American Cancer Society Professor Tony Hunter. “Understanding this communication network between the cancer cells and stellate cells may enable us to develop more effective therapies, along with tools for earlier diagnosis.”

The National Institutes of Health (NIH) project that pancreatic cancer will be the second-leading cause of cancer-related deaths in the United States by 2030. Last year, the NIH reported roughly 55,000 new cases of pancreatic cancer with over 44,000 deaths from the disease.

“Most solid cancers are not caused by abnormality in a single cell type. Instead, the tumor cells live and work cooperatively with surrounding normal cells in the tissue. They can also ‘go bad’ together as an unholy alliance, which can lead to cancer,” says Yu Shi, a postdoctoral fellow at Salk and first author of the paper. “If we can understand how the different types of cells interact with each other within the tumor microenvironment, then we may uncover a good target to eventually cure the disease.”

To understand the method of communication between the pancreatic stellate cells and the cancer cells, the researchers first developed cell cultures to analyze the proteins that were being exported from the stellate cells. They suspected that stellate cells were communicating with tumor cells using specific signaling proteins, but until now, they did not know which ones.

“We wanted to see what kind of signaling was activated in the tumor cells in pancreatic cancer,” says Shi. “LIF is an important factor that normally helps stem cells maintain their developmental potential during the embryonic period, but usually vanishes in adulthood. We found that activated stellate cells are secreting LIF, which acts on neighboring cancer cells.”

After pinpointing LIF as the critical communicator, the researchers wanted to better understand the function of LIF during pancreatic cancer progression to evaluate the protein as a potential therapeutic target. By observing the effects on tumor growth of blocking or destroying LIF (both render the protein nonfunctional) in a mouse model of pancreatic cancer, the researchers could examine how LIF affects tumor progression and response to treatment. Both techniques independently showed that without functional LIF signaling, tumor progression slowed down and responses to chemotherapeutic drugs used in treating human cancer (such as gemcitabine) were improved.

In addition to checking the consequences of LIF blockade in mice, the researchers also examined the levels of LIF in tumor tissue and blood from human pancreatic cancer patients. They found high levels of LIF in both the patients’ tumors and blood. They also found a significant correlation between LIF levels, tumor progression and patient response to chemotherapy. These early findings suggest that LIF holds promise as a biomarker for pancreatic cancer stage and treatment response. 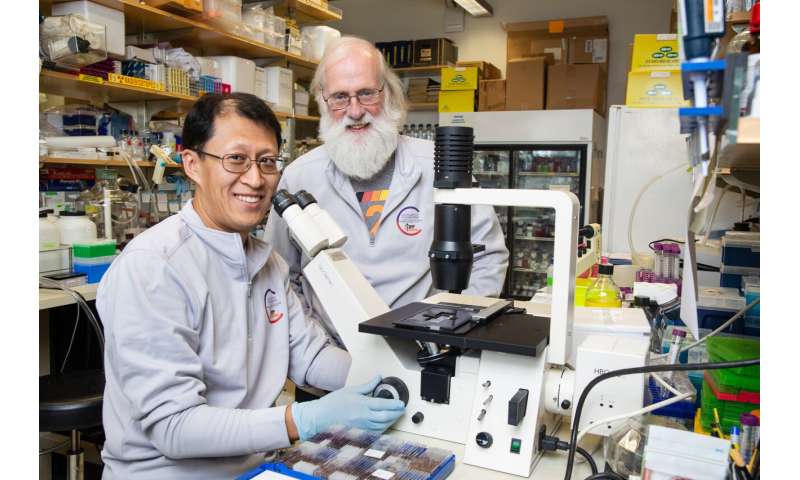 “We were excited to find that elevated LIF levels were significantly correlated with tumor cell status and the response to chemotherapy,” Shi adds. “These results are consistent in both the mouse model and human pancreatic cancer.”

Currently, the only FDA-approved biomarker for pancreatic cancer is a carbohydrate called CA19-9. This study found that LIF was an accurate and independent measure of pancreatic cancer, and was a better indicator of therapeutic response than CA19-9.

“One possibility would be to use a combination of the two biomarkers to get a better picture of the disease status and response,” says Hunter. “We also think that the anti-LIF antibody therapy could be useful, in combination with other therapeutics, to treat pancreatic cancer. This is very translatable research, and it’s nice to be working on a project that has the ability to make a direct impact on a deadly human cancer.”