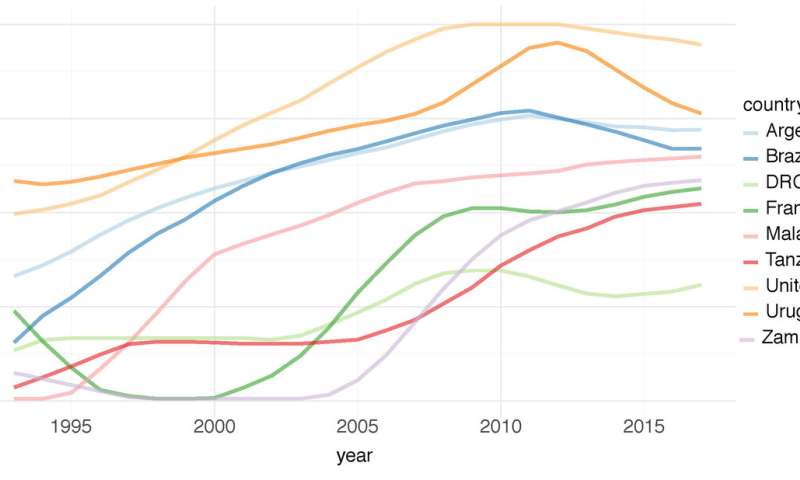 A country’s progress towards measles elimination can be mapped on a “canonical path” that in turn can guide vaccination strategies, according to a study from scientists at the Johns Hopkins Bloomberg School of Public Health.

The researchers found that the trajectory countries follow to eliminating measles is driven by their birth rate and vaccination coverage. Adoption of the new canonical path concept, described in a paper that will be published May 9 in Science, could help countries tailor measles control efforts as they progress towards measles elimination, in general, and also as a response to outbreaks.

Childhood measles vaccinations have been standard in many countries since the 1960s, and measles was thought to have been eliminated in several countries, including, as of 2000, the U.S. At the same time, measles still infects several million people globally, mostly children, killing an estimated 100,000 every year.

Recent outbreaks in the U.S. and across the globe are making 2019 one of the worst year for measles in decades.

The researchers call this path ‘canonical’ because it is the expected outcome of the fundamental theory that governs epidemic dynamics for measles.

“When we completed the initial analysis for this paper using data up until 2014, the story was very clear: Countries were progressing towards elimination along the canonical path then staying there,” says study senior author Justin Lessler, associate professor in the Department of Epidemiology at the Bloomberg School. “Unfortunately, when we added more recent data, the story got more complicated as many countries, particularly in the Americas, began to move backward along the path, the result of inadequate vaccination fueled in part by social unrest and vaccine refusal in various countries.”

The Centers for Disease Control and Prevention (CDC) has estimated that measles vaccinations prevented more than 20 million deaths worldwide between 2000-2017. Even as late as 2000, there were still as many as 28 million measles cases globally with more than 500,000 associated deaths. In recent years, there have been measles outbreaks with thousands of reported cases even in wealthy countries such as Germany, Italy and Spain. Some less-wealthy countries including India, the Philippines, Ethiopia and Nigeria still at times report tens of thousands of cases each year.

“There has been generally a reliance on crude and qualitative frameworks for ranking countries in their progress to elimination and determining vaccination strategies,” says study co-first author Amy Winter, MPH, Ph.D., a postdoctoral researcher in the Department of Epidemiology at the Bloomberg School. “We wanted to improve this framework using readily available data and simple calculations to summarize the complex dynamics as countries move to measles elimination.”

The canonical path described by Winter, Lessler and their colleagues reflects the fact that a country’s annual number of measles cases per capita, a measure called the incidence, declines as the number of measles-susceptible people declines. The decline in the number of susceptible children occurs due to increased vaccination and/or drops in the birth rate. The path also reflects the observation that, as measles incidence declines, it initially becomes more variable from year to year—as susceptible hosts become fewer and farther apart on average, and outbreaks become more sporadic and unpredictable.

These more sporadic outbreaks change the nature of who gets infected, changing the disease from one of only children to one that can strike adults as well. This age shift has been obvious in recent outbreaks in the U.S. and elsewhere.

“Eventually you reach a point on the path where you really do appear to have measles under control and are moving towards elimination, and at that point the variability of the incidence starts to decrease too,” Lessler says.

A country’s position on this path implies other important information, such as the age distribution of the people who are susceptible to measles. As outbreaks become more sporadic, unvaccinated people can get older before they are infected. This can lead to challenges rarely seen in “endemic” settings where everyone gets infected in childhood, such as infections in pregnant women.

“Zambia, for example, went from having consistently widespread measles infections among young children to having almost no measles for a while, and then started having sporadic, occasionally large outbreaks in older children,” Lessler says. “In cases like that, the age range you target with vaccination campaigns has to go up.”

After introducing measles vaccines, countries generally tend to move along the path in one direction, towards measles elimination. But if vaccination coverage is reduced, they can turn around and start moving in the opposite direction. For infectious disease epidemiologists, one of the big stories in the past few years has been the jump in measles cases in middle-income countries such as Brazil and Ukraine, due in part to many parents’ refusal to vaccinate their children.