Despite the numbers affected, for many years, significantly less has been spent on research into dementia in comparison to conditions such as cancer and heart disease. And a lack of awareness or thoughtfulness about those with the condition even prevails in hospitals – recent research by the National Institute for Health Research into the treatment of patients with dementia in hospitals in the UK found instances of raising the siderails of beds, putting walking frames out of reach, or sedating patients with drugs to reduce their mobility. The study says these sorts of containment and restraint tactics lead to the “dehumanisation” of patients, leaving them angry and highly stressed and worsening their already poor health.

Such dehumanisation perhaps comes as little surprise, given that dementia is often described as the loss of someone before they actually die. And despite what has been described as a “dementia boom” across the mainstream press, television, film, literature and other forms of art and media, for the most part, representations of people with dementia remain “essentially negative”. Invaders, zombies or empty shells are common metaphors used to represent dementia.

My research focuses on graphic narratives, or comics, about dementia. I am currently working with a peer support group for people with dementia from the Beth Johnson Foundation in Stoke-on-Trent. As with other art and media, there has been an increase in the number of dementia-related comics in recent years. Examples include Tangles by Sarah Leavitt (2010); Aliceheimer’s by Dana Walrath (2016), and Take Care, Son by Tony Husband (2014).

I shared some examples of these published comics with the group – I wanted to see how they reacted to the various portrayals of people with dementia. While they were happy to see awareness of dementia being raised in this way, those in the group felt that the themes and characters in the comics did not correspond to their own experiences of living with dementia.

They were particularly critical of the portrayal of characters with dementia. They felt these were depicted in a way that encouraged readers to view them differently: as abnormal or less than human. One woman felt that characterising people with dementia in this way made it easy to forget that “I’m still me inside”. Similarly, a man pointed out that people with dementia could speak for themselves: “He’s got a tongue, you know!”

In contrast to the ways characters with dementia were depicted in the comics, members of the group were keen to stress that, in their own lives, they were still socially active and very involved in their local communities. One woman remarked: “People live very, very well for quite a long time with dementia.” They described how their lives had many positive elements, a message they felt was missing from the narratives. One participant talked about a renewed interest in art that he had recently developed, for example. 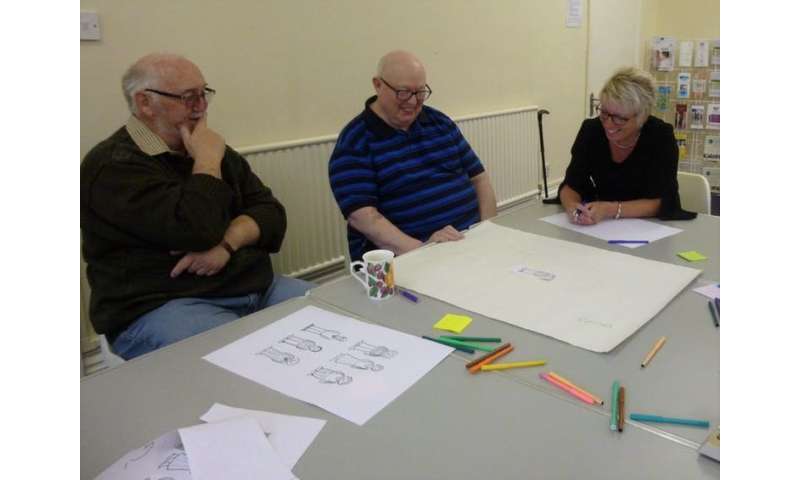 When we discussed the reasons why the comics did not match their own experiences, the group felt it was probably because they were mostly written from the perspective of a carer or family member, not someone with dementia themselves. This meant they tended to portray the person with dementia as they appeared to their family rather than how they thought about themselves. Similar problems have been found in the portrayal of people with dementia elsewhere, such as film. Here, too, while family members and others are portrayed as rounded characters, the person with dementia is often reduced to a simplistic stereotype.

My experience of sharing existing graphic narratives with the peer support group highlighted the need for the voices of people with dementia to be heard more widely. Therefore, I plan to co-produce a comic about dementia. This will involve an artist working with the peer support group in a series of arts workshops to find ways to represent and depict the condition in a comics format.