‘I want surgery even if it costs my life’: Teenage girl, whose deadly facial tumour has left her blind has been abandoned by her father after he became ashamed of her disfigurement

An 18-year-old girl with a life-threatening tumour covering one side of her face has been abandoned by her father after he became ashamed of her disfigurement.

The growth has left Salibunnisa, from the north Indian state of Madhya Pradesh, blind in one eye, as well as in excruciating pain every day.

Salibunnisa, who suffers from neurofibromatosis, is now forced to rely on her mother Mehrunissa, 40, who works multiple jobs just to make ends meet.

Unable to take the cruel torments of bullies, Salibunnisa dropped out of school, saying: ‘People stare at me, say harsh words to me. The girls in my neighborhood ignore me because I don’t look pretty.’

Doctors claim surgery is too risky, yet the teenager is facing loosing sight in her other eye unless she receives urgent treatment.

Salibunnisa, who lives as a recluse, said: ‘I want to get my surgery done even if it costs my life. I am fed up with everything. I wish I could look normal.’

After receiving no financial help from the Government, Salibunnisa and her family are appealing to the public to assist them in funding her surgery.

Scroll down for video 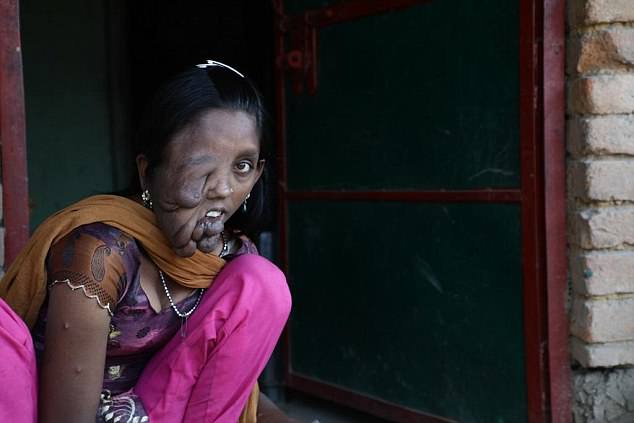 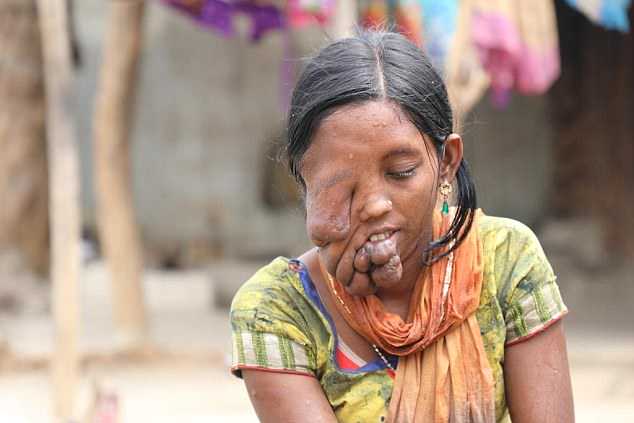 Speaking of how others treat her, Salibunnisa said: ‘I was bullied by fellow students at school. They would call me a ghost. Everyone made fun of me.

‘After some time, I couldn’t take it anymore and decided to drop out of school. But I never stopped my studies.’

Aside from the emotional strain, Salibunissa’s tumours also cause her agonising physical pain.

She said: ‘They hurt while bathing, wearing clothes, cleaning utensils, eating and cooking.

Despite all everything she has endured, Salibunnisa still has positive hopes for the future.

She said: ‘I am completely blinded in one eye. But I am going to continue my studies come what may.

‘If I get some help with the treatment, I would like to complete my formal studies. I want to become a teacher.’ 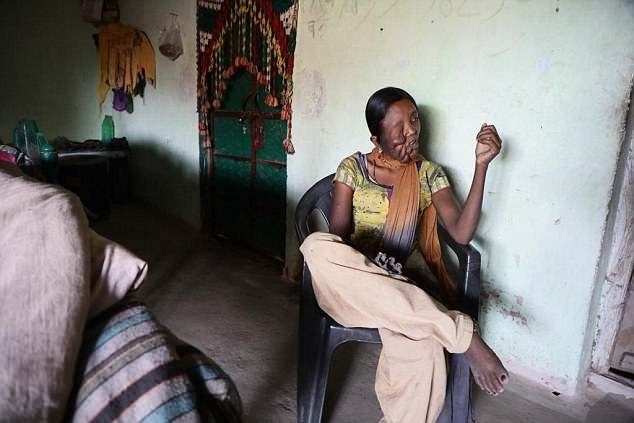 Unable to take the cruel torments of bullies, Salibunnisa dropped out of school 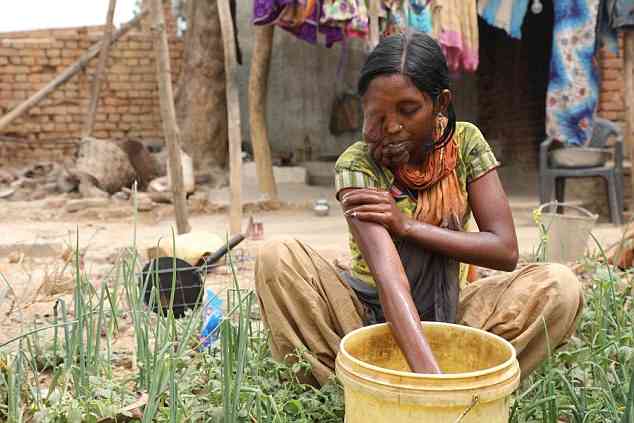 As well as affecting her emotionally, she says her condition even makes washing painful 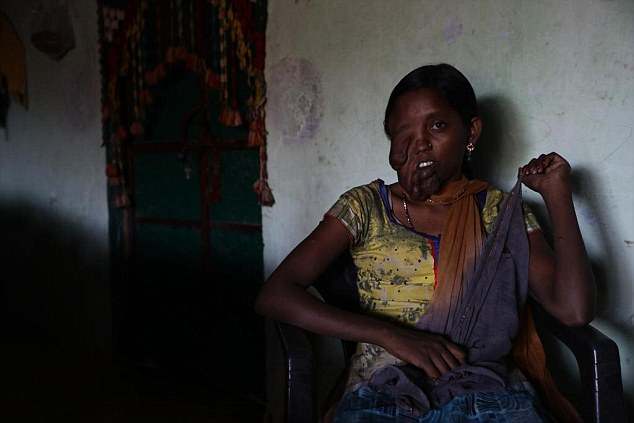 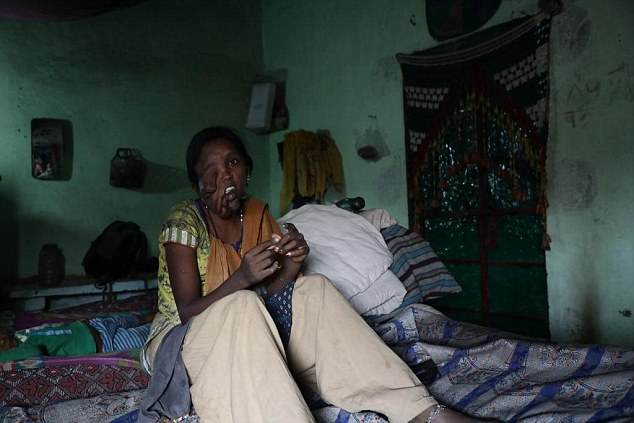 ‘Please help me, I don’t want to die like this’

Speaking of how surgeons refuse to operate on her daughter, Mehrunnisa, who works at a brick kiln, tearfully said: ‘She is my only child. I can see her dying a slow death.

‘Who would take care of her once I am gone? I want her to start looking like normal girls of her age.’

Mehrunnisa said: ‘I am working overtime to organise the funds, well aware of the fact I won’t be able to put together such a massive some in my entire lifetime.’

A crowd-funding campaign has been set up on Ketto, which is India’s version of GoFundMe, to help raise money for Salibunissa’s treatment.

Mehrunnisa has tried seeking assistance from Government authorities and politicians, however, no one has extended a helping hand so far.

Salibunnisa, who believes she will one day have treatment, said: ‘Once the surgery is done and I start to look like other girls, I want to apply makeup, dress up well and go out to face the world.

‘I hate to sit inside in this enclosed room. Please help me, I don’t want to get blinded in the other eye, too, and die like this.’

According to her mother, once Salibunissa’s tumours are removed she will be free to live the life of a normal young woman.

Mehrunissa said: ‘People mock her and call her a ghost.

‘I try not to take her out often to save her from this cruel world.

‘I want her to get married like other girls and lead a happy life’.

Neurofibromatosis type 1 (NF1) is a common genetic condition that affects one in 3,000 people in the UK to some extent.

Around half of cases are inherited from a parent and the other half occur spontaneously.

Early symptoms include flat brown birthmarks, and lumps and bumps in unusual places.

It is also associated with mild learning difficulties, although most people with NF1 are otherwise healthy and live to a normal life expectancy.

There is no cure, however, surgery can be performed to remove the benign growths.

Abandoned by her father

Mehrunissa claims her daughter’s disfigurement came about after a charlatan doctor injected Salibunnisa in the eye as a baby.

She said: ‘When Salibunnisa was just 6 months old, my husband took us to stay with my in-laws.

‘It was there she got an eye infection that initially looked like a cyst.

‘My husband took her to a nearby quack who injected her in the eye, since then my daughter’s face started developing tumours.’

Mehrunissa claims the injection caused her daughter’s cyst to grow into a large tumour that dominated the right side of her face.

Ashamed by his daughter’s appearance, Mehrunnisa’s husband has since established a life with his new family.

She said: ‘After abandoning my daughter and me, he happily took another woman in his life and fathered four children from her.

‘But he never cared to check if we are dead or alive.’

Tumours are ‘ruining her organs’

Dr Ravishankar Thakur, a medical practitioner at a state-run facility at Singrauli, said: ‘The patient’s tumours are ruining her organs and could be life-threatening if not treated.

‘She is suffering from neurofibromatosis that makes changes in the chromosome, disturbing the cell growth and leading to the uncontrolled growth of the tumours.

‘I would advise them to seek an expert opinion from a surgeon and get her treated as soon as possible.’ 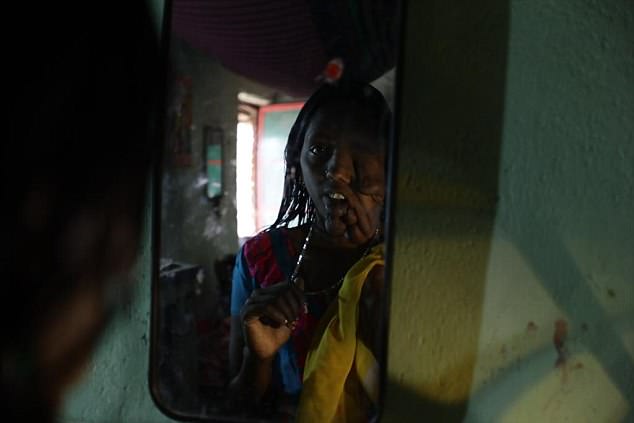 Optimistic about the future, she dreams of one day wearing make-up and feeling attractive 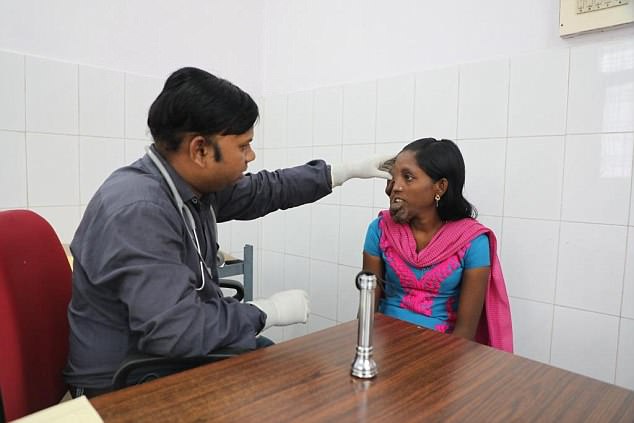