From not being able to cook to being ‘disgusted’ by vegetables: Study reveals why young men are not eating their ‘five-a-day’

Refusing to cook to not being able to stomach vegetables are two main reasons why young men are so bad at getting their ‘five-a-day’, research suggests.

Scientists from the University of East Anglia looked at the eating habits of more than 30 British males aged 19-to-24.

‘Low consumers’, defined as eating less than three portions of fresh produce a day, described vegetables as ‘disgusting’ and ‘bland’.

Others complained the ingredients are a hassle to prepare, with one saying he only eats vegetables if his ‘mum were to cook them’.

While the men acknowledged fruit and veg are good for us, one said he ‘never ever thinks about his diet’ because he is too preoccupied ‘thinking about girls’. 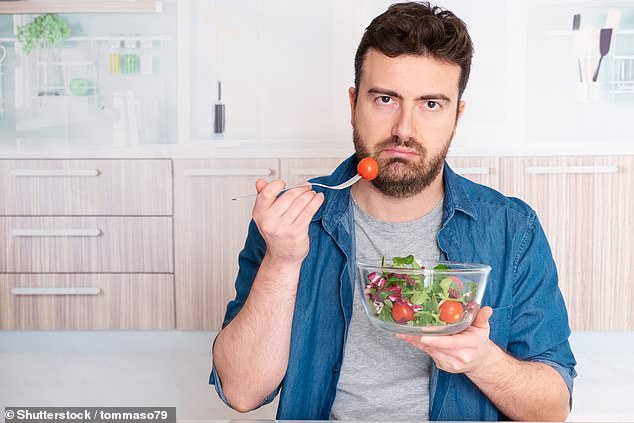 ‘We found the young men with the best diets really believed in their ability to afford, shop for, prepare, and cook fruit and vegetables,’ lead author Dr Stephanie Howard Wilsher said.

‘These high consumers felt they had good control of their diet and health, and had positive attitudes towards healthy food.

‘They had a holistic view of health, liked the taste and variety of flavours in fruit and veg, and had learned to cook for themselves.

‘Those who weren’t eating enough either could or would not cook.

‘For this group, convenience foods were easier and fruit and vegetables were viewed as expensive, not readily available and their preparation time-consuming.’

Getting your five-a-day has been linked to a lower risk of death from all causes, the researchers wrote in the journal Nutrients.

However, despite fruit and vegetables’ benefits, most people across the world only manage three servings a day.

Past studies that have looked at fruit and vegetable consumption among adults have not broken intake down into age groups or gender.

‘In England about half of men eat less than three portions of fruit and veg a day, and young men aged 18-24 eat the least,’ Dr Howard Wilsher said.

‘This is really worrying because men are more likely than women to suffer health problems later in life such as coronary heart disease.

‘We wanted to find out why many young men aren’t eating their five-a-day, and also what motivates those who do.’

The researchers analysed the food diaries of 34 men who were otherwise healthy.

Those who ate four or more portions of fruit or vegetables a day were considered ‘high consumers’. Only four of the men ate at least five servings a day.

Interviews with the men revealed those who ate lots of fresh produce had more control over their meals, whereas low consumers were often cooked for by their families.

‘I would only eat them [vegetables] if like mum were to cook them,’ a low consumer said.

High consumers were also more likely to be taught to cook at a young age.

‘I have got a few pointers off my mum and my nan, it’s kind of make it up as you go along and try things,’ one said.

High consumers took the time to buy and prepare fruit and vegetables, and felt they had the cooking skills necessary to add these to a meal.

Whereas low consumers viewed fresh produce as expensive and a hassle to prepare, with convenience foods being ‘easier’.

Low consumers also complained vegetables are ‘disgusting’ and ‘bland’, while another said he ‘doesn’t like the texture of fruit’. Whereas a high consumer said ‘vegetables come in all different flavours’.

Many low consumers praised convenience foods, with one saying: ‘If I am hungry I want to eat it now. I am impatient and don’t like waiting.’

Those who ate four or more potions of fruit and vegetables a day also recongised them as being healthy.

One even claimed to be ‘less snappy, more willing to do stuff to help’ after eating fresh produce.

But a low consumer said: ‘I never ever think about my diet, I think about girls, motor cross, gym, car.’

Another added: [As] a single male, it’s [health] not really on the top of your mind too much, there are always other things to be doing.’

‘Low consumers didn’t think too much about their future health and had a ‘live for today’ attitude,’ Dr Howard Wilsher said.

‘They hoped they would stay healthy, even though many had close family members suffering from chronic health conditions.’

High consumers were more likely to make their health a priority. ‘It’s a responsibility, and its lifestyle and the way you perceive and live life,’ one said.

They also recognised fruits and vegetables as being important for our wellbeing. ‘If you have a bad diet, then you are going to be unhealthy,’ a high consumer said.

Another added: ‘We don’t want to be all fat and having heart attacks at 40 so we stick to fruit.’

Low consumers argued they do not know enough about healthy living to make good choices.

One also said health promotions, like the five-a-day campaign, are ‘the Government nagging people to lose weight’.

‘Those who didn’t eat much fruit and veg had a mistrust of health information,’ Dr Howard Wilsher said.

‘They thought diet and health promotions should be better designed around their interests – such as sex, exercise and sports, with real examples of male health and fitness.

Future studies should look at the eating habits of young men around the world and how these affect their health, the researchers said.

Meals should be based on potatoes, bread, rice, pasta or other starchy carbohydrates, ideally wholegrain, according to the NHS

• Base meals on potatoes, bread, rice, pasta or other starchy carbohydrates, ideally wholegrain

• 30 grams of fibre a day: This is the same as eating all of the following: 5 portions of fruit and vegetables, 2 whole-wheat cereal biscuits, 2 thick slices of wholemeal bread and large baked potato with the skin on

• Eat some beans, pulses, fish, eggs, meat and other proteins (including 2 portions of fish every week, one of which should be oily)

• Choose unsaturated oils and spreads and consuming in small amounts