Poor sleep makes you fat and weak by changing your DNA

Poor sleep makes you fat and weak by changing your DNA: Just ONE sleepless night is enough to disrupt your body

Sleeping badly or working night shifts could be making you fat, weak and more likely to become diabetic.

A study has revealed short or restless slumber changes the way people’s DNA works and makes the body more dedicated to storing fat.

Muscles get smaller and fat stores begin to rise when people lose as little as one night’s sleep, the experts found.

Although midnight snacks or being too tired to exercise could be blamed for tired people getting fatter, there may now be a more scientific reason.

Researchers have linked losing sleep to weight gain in the past but have found it difficult to explain – now they reveal it could be linked to the body clock.

And a tired body also becomes less able to handle sugar in the blood which raises the risk of someone developing type 2 diabetes.

The discovery could be important in helping to combat expanding waistlines around the world which are contributing to serious disease and early deaths. 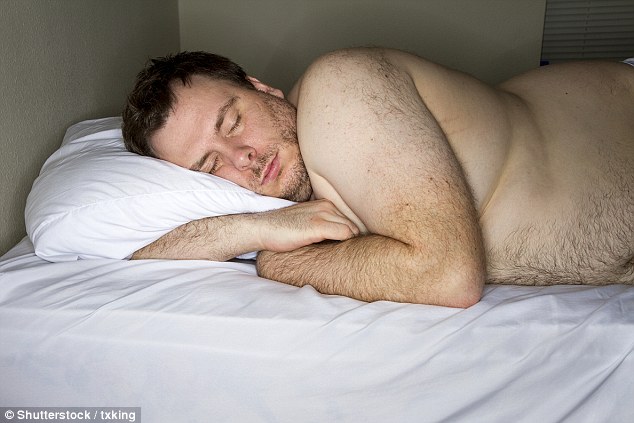 Losing just one night’s sleep could be enough to change a person’s DNA to make the body prioritise storing fat over building muscle, according to Swedish researchers at Uppsala University

Sleep researchers from Uppsala University in Sweden did a study on 15 people who they tested after a full night’s sleep and after a sleepless night.

They took fat and muscle tissue samples and collected blood from the healthy weight participants and found the way their DNA works had changed.

After just one night of sleeplessness genes begin encouraging the body to store more fat and to get rid of muscle strength.

Sleep loss was already known to contribute to obesity but the scientists say they are the first to ever notice the physical changes that are to blame.

Study author Jonathan Cedernaes said: ‘We think the changes we have observed can constitute another piece of the puzzle of how chronic disruption of sleep may impact the risk of developing, for example, obesity.’

The body’s decision to store more fat when a person is tired appears to be linked to a break in cells’ circadian rhythms – commonly known as the body clock.

Children who get less than the recommended amount of sleep each night have a higher chance of becoming fat, a study has suggested.

Researchers found youngsters are 58 per cent more likely to become overweight if they fail to get at least eight hours each night.

Warwick University scientists, who led the study published in April, said there is a ‘strikingly consistent’ link between short sleep and obesity.

Nearly half of primary school children are dangerously overweight in some parts of England, figures show.

Official guidelines recommend children aged from six to 13 should get between nine and 11 hours sleep a night, and older teenagers between eight and 10 hours.

When sleep times are changed it disrupts the way DNA is used by the body and changes which processes are seen as most important, the scientists say.

And fat cells – which are the body’s way of storing energy like a battery – are prioritised above muscle strength, suggesting the body may be trying to cope with the low energy levels people experience when they are tired.

Being fat increases the risk of heart disease, cancer and stroke

The researchers say their findings are important because high levels of body fat increase the risk of the world’s biggest causes of death: cancer, heart disease and stroke.

People’s sensitivity to blood sugar is also dampened when they’re tired, the study found, which suggests those who don’t sleep well are at higher risk of type 2 diabetes.

‘We saw that the [fatty] tissue is attempting to increase its capacity to store fat following sleep loss,’ said Dr Cedernaes.

‘Whereas we observed signs of breakdown of skeletal muscle.

‘We also noted changes in levels of proteins involved handling blood glucose, and this could help explain why the participants’ glucose sensitivity was impaired following sleep loss.

‘Taken together, these observations may provide at least partial insight as to why chronic sleep loss and shift work can increase the risk of adverse weight gain as well as the risk of type 2 diabetes.’

During the study biopsies were taken from the participants after two lab tests – in one they slept for over eight hours and in the other they did not sleep at all.

Researchers then examined the make-up of fat and muscles tissues, as well as measuring sugar levels in the blood.

They say they only studied short-term sleep deprivation and that it would be ‘interesting’ to know how chronic tiredness affects the body.

The findings were published in the journal Science Advances.