Semi-naked women are being used to promote dangerous shisha on social media and turning hookah addiction into a ‘badge of honour’, study finds

Out of more than 11,500 Instagram posts at any one time, nearly all advocate hookah, with just 0.4 percent highlighting its health risks, a US study found.

Researchers wrote: ‘A growing body of evidence suggests that hookah smoking can lead to nicotine dependence and many other known smoking-related illnesses such as cancer, cardiovascular disease and respiratory disease.’

Hashtags such as #hookahaddiction produce thousands of pictures of semi-naked women promoting shisha bars or appreciation societies under captions like ‘hookah is sexy’.

Some even call a dependency on so-called hubble bubble smoking a ‘badge of honour’. 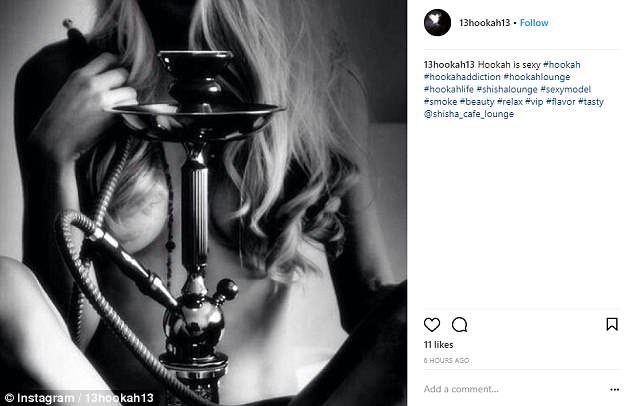 WHAT IS SHISHA? AND IS IT DANGEROUS?

Shisha, also known as hookah, is a way of smoking tobacco, which is sometimes mixed with fruit or molasses sugar, through a bowl and hose or tube.

The tube ends in a mouthpiece from which smokers inhale the fumes.

Shisha is traditionally used by people from the Middle East or Asia.

The smoke released during shisha releases toxins including carbon monoxide and heavy metals, which reduce the body’s ability to carry oxygen in the blood.

It puts peoples at the same risks as traditional smoking, such as heart disease, cancer and pregnancy complications.

Most people smoke shisha for more longer periods of time than smoking a cigarette, with one puff equaling the same amount of smoke as a whole cigarette.

The average shisha-smoking session lasts an hour, with people inhaling the same amount of smoke as from 100 cigarettes.

The researchers, from from Florida International University, randomly selected 279 posts from 11,517 tagged #hookah or #shisha over four days in October 2016.

Results suggest 29.2 per cent of shisha-related posts are created by hookah bars, while 35.5 per cent promote it as a social activity.

Shisha is also expressed as part of an identity or community in 19.7 per cent of posts under hashtags like #hookahlife.

Although worldwide, most shisha-related posts come from Russia, the US and Germany, with 38.5 per cent, 18.6 per cent and 10.7 per cent of the material, respectively.

The researchers believe shisha-promoting posts should be tackled by policymakers through campaigns that counterbalance such themes on social media.

They wrote: ‘This study represents an important step in identifying hookah-related themes on Instagram and demonstrates the value in using data from this social platform to complement and extend our understanding of health behaviors.

‘These findings can inform the design of future tobacco control media campaigns aimed at countering the normalization of hookah use on social media.’

The results were published in the journal Health Education & Behavior.

Strip clubs also encourage their followers to book their next #hookahparty