The baby poo probiotic smoothie! Scientists create cocktail of ‘good bacteria’ from infant feces that could prevent and treat diseases

It seems everyone is trying to load up on probiotics these days to balance their gut bacteria, whether it’s from a pricey bottle of kombucha or tangy pickles.

So, news of a new source of ‘good’ bacteria is always welcome.

But this one may be a harder pill to swallow.

Scientists have found probiotics in the feces of babies. 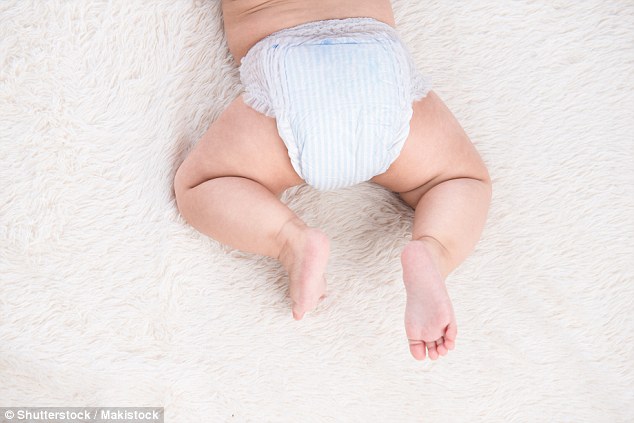 Scientists at Wake Forest School of Medicine fed bacteria from collected diapers to mice, and saw good results in their gut health

‘Babies are usually pretty healthy and clearly do not suffer from age-related diseases, such as diabetes and cancer,’ said the lead author of the study Hariom Yadav, PhD, assistant professor of molecular medicine at Wake Forest School of Medicine.

‘And, of course, their poop is readily available.’

However, scientists are excited about at least opening the door to a new source of the bacteria strains that could help people with a variety of diseases that derail their gut health.

‘Increasing them may be helpful in maintaining or even restoring a normal gut environment, and hopefully, improving health.’

The new discoveries made about the gut’s influence on almost everything are some of the most important ones made in biology in the last few decades.

We now know the gut influences our brain health, autoimmune diseases, our sleep cycle, our hormones, and more. We also know that our gut health is influenced by all manner of things – whether you were born via C-section or not, how many times you had sex this week, your stress levels, what you eat.

As a result, the probiotic market is booming.

And yet we are still a long way away from being able to map a person’s individualized gut type, and scientists are still working to identify natural probiotic strains that could be used to treat imbalances, to prevent or treat certain diseases.

Studies have been performed in animal models and humans, but the vast majority of those have only been conducted in those with diseases or other debilitating conditions.

For Dr Yadav’s study, he collected bacteria from the feces of babies and fed it to mice to see what the impact was.

To do so, they collected fecal samples from the diapers of 34 healthy infants.

After following a robust protocol of isolation, characterization and safety validation of infant gut-origin Lactobacillus and Enterococcus strains with probiotic attributes, the researchers selected the 10 best out of the 321 analyzed.

To test the ability of these human-origin probiotics to change the gut microbiome – bacteria that live inside the digestive track – and their capacity to produce SCFAs, mice were given a single dose, as well as five consecutive doses of this 10-strain probiotic cocktail.

Then the researchers injected the same probiotic mixture in the same doses into a human feces medium.

The scientists found that the single- and five-dose feeding of these selected probiotics modulated the gut microbiome and enhanced the production of SCFAs in mouse gut and human feces.

‘This work provides evidence that these human-origin probiotics could be exploited as biotherapeutic regimens for human diseases associated with gut microbiome imbalance and decreased SCFA production in the gut,’ Dr Yadav said.

‘Our data should be useful for future studies aimed at investigating the influence of probiotics on human microbiome, metabolism and associated diseases.’

The study was limited in that it didn’t test the probiotic mixture in any disease models.