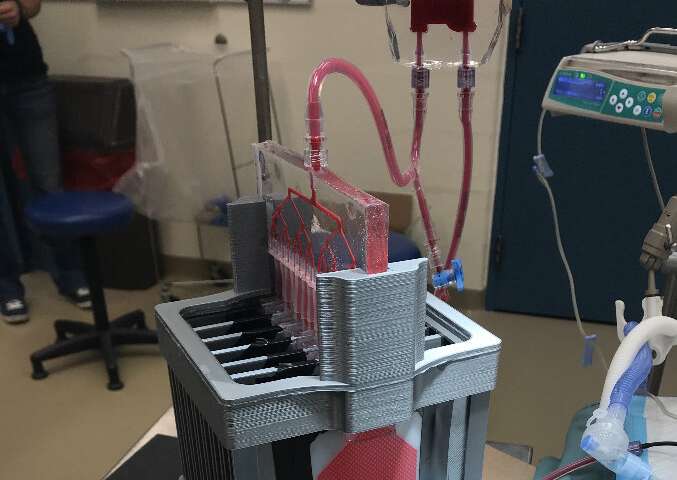 An international team led by current and former McMaster University researchers has developed an artificial lung to support pre-term and other newborn babies in respiratory distress.

The group has proven the concept using a live piglet, a major step along the route toward approval for use in humans, where the portable device could save many lives and prevent catastrophic damage by taking up some of the placenta’s role in oxygenating the blood until babies are able to breathe independently.

“This technology, which is complicated to create but simple to use, is going to create a situation where more and more of these babies can be saved, and that is what is driving all of us to do this,” says Ravi Selvaganapathy, a professor of Mechanical and Biomedical Engineering at McMaster who holds the Canada Research Chair in Biomicrofluidics.

The device, designed to be connected to a newborn’s umbilical cord, uses the existing power of the heart to drive blood through channels of a fine membrane whose structure resembles the lining of the lungs, allowing the release of carbon dioxide and the uptake of oxygen while protecting the blood from outside infection.

The membrane is only 35 to 50 microns thick—about half the thickness of a human hair—permitting natural diffusion of carbon dioxide and oxygen. The baby’s own heart beats at a rate to regulate the supply of oxygen.

Independent breathing is a particular obstacle to the survival of pre-term babies, since the lungs are not fully formed in many pre-term infants, placing them in respiratory distress from the moment they are born because they cannot take up enough oxygen on their own.

“Typically, a newborn immediately takes over breathing, feeding, and other organ functions that have been provided in utero via the placenta,” says Christoph Fusch, a McMaster faculty member in Pediatrics and Chief of Pediatrics at Nuremberg General Hospital in Germany, which is affiliated with Paracelsus Medical School.

“When this transition is disturbed due to disease or immaturity, our device will enable neonatal caregivers to mimic the intrauterine supply. It will improve survival, reduce brain damage and improve long-term health in pre-term and term newborns with life-threatening postnatal lung failure.”

Though the design of the artificial lung is complex, the device itself operates without external power and is simple to deploy—compared to existing technology which is much riskier and far more expensive—making it a promising contender for use in developing countries, where the risk of death among pre-term babies is greatest.

“Our research takes Mother Nature as a blueprint,” says Niels Rochow, a former fellow in Neonatology at McMaster and now a staff neonatologist working with Fusch at the Nuremberg General Hospital. “The artificial placenta will allow gentle and efficient care in newborn babies with life-threatening postnatal lung failure. Families will benefit having babies with better chances for a normal life.”

The device would ideally be paired with still-developing technology to supply pre-term babies with nutrition, also through the umbilical cord, thereby replacing the major functions of the placenta long enough for vulnerable pre-term babies to finish developing safely outside the womb.

“Developing this device seemed like an impossible mission in so many ways,” says Mohammadhossein Dabaghi, who earned his Ph.D. in Biomedical Engineering at McMaster and is now a post-doctoral fellow in the university’s Department of Medicine. “A pumpless device that is capable of gas exchange in ambient air is something that one would expect to be bulky, but we were able to keep it compact and by using microfabrication technologies we developed in our group.”

The proof-of-concept research is published today in the journal Advanced Science. The nine-person research team showed that the device worked in a live newborn piglet, restoring its reduced blood-oxygen levels to normal. Piglets are close in weight to human babies and are very similar physiologically.