ARFID isn’t well know, but experts say the extreme disorder can lead to serious health problems if a child doesn’t get proper treatment. 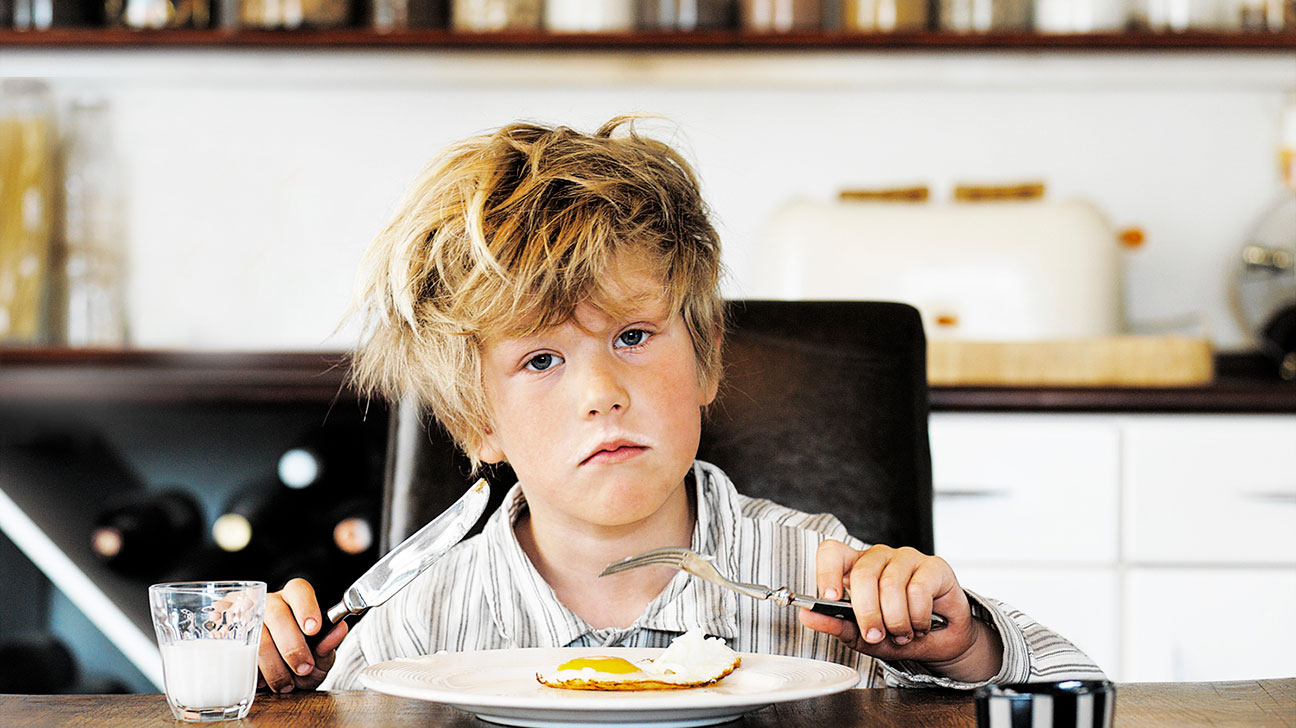 At some point or another, most children go through a picky eating stage.

They don’t want to try new things, they refuse foods they once loved, and they generally drive their parents crazy each time they turn their noses up at whatever has been put on their plate.

In fact, Jill Castle, a registered dietician specializing in pediatric nutrition, told Healthline that most kids grow out of the picky phase by around age 6.

Except when they don’t.

Jayce Walker was one of those kids who never really stopped being picky about what he ate. And his version of picky was an extreme most parents probably can’t imagine.

Indeed, there were only five foods he was willing to eat.

His mother, Jessie Walker, told Healthline, “When Jayce was 2 years old, he only ate Aunt Jemima frozen pancakes, Tyson chicken nuggets, gold fish, Cocoa Pebbles, and McDonald’s french fries. No other brands of those foods were acceptable. He never had any fruits, veggies, or grains.”

Concerned about his eating patterns, Jayce’s parents went to his pediatrician. But they were told this was simply a normal stage and they should stop giving him the foods he was demanding.

“Kids won’t starve themselves” is the line most pediatricians offer parents of picky eaters.

“He starved himself for an entire week,” Jessie Walker said. “At the end of the seven days, he was so lethargic he couldn’t get off the couch.”

What they didn’t know at the time was that Jayce was dealing with an eating disorder most people have never heard of: avoidant/restrictive food intake disorder (ARFID.)

ARFID was added to the new edition of the Diagnostic and Statistical Manual of Mental Disorders in 2013.

Prior to that point, it was a condition few practitioners knew anything about. Even now, parents might be hard-pressed to find a doctor who knows how to treat it.

But those who have dealt with ARFID are passionate about raising awareness. So, details of this disorder are starting to find their way into various mommy blogs, online publications, and treatment center pages.

The impact of ARFID

Castle is one of the practitioners who both understands and treats ARFID.

She’s written extensively about the condition and has dedicated an entire podcast to it as well.

She recently explained to Healthline, “There is a lot of stress and anxiety around food for these kids, to the point where it makes them socially anxious. They can’t spend the night with friends and don’t want to go to sporting banquets or out to team meals because they worry there will be nothing for them to eat. It starts to encroach on their ability to function socially.”

“The other sort of classic sign is that the diet is very limited,” she added. “So we’ll see 20 to 30 foods in their diet, or less. It’s a very repetitive diet where they exhibit an unwillingness to try anything new, truly a fear of trying anything new. For a lot of families, they convince themselves this is just who their child is — that they’ve always been picky. But one of the things we see over time is this progressive dropping of foods from their diet. So while they might have started out with only 20 foods they were willing to eat, that number may slowly become 15. And then 10. And then even less.”

Kim DiRé of Arizona is a licensed professional counselor specializing in somatic-trauma healing.

Her first experience with ARFID was extreme.

“I’ll affectionately call him ‘French Fry Boy,’” she told Healthline. “When I first met him, he was 14 years old. And since the age of 2, he had eaten nothing but In and Out french fries. He ate two orders for breakfast, lunch, and dinner every day, for 12 years.”

As you can imagine, French Fry Boy was suffering from a host of medical issues by the time he was referred to DiRé.

The teen was morbidly obese, in a state of malnutrition, and struggling with osteoporosis. His french fry diet had done him no favors.

“He had been referred to me by a cardiologist,” DiRé said. “And he was desperate.”

“Really, it was a wonderful accident that he’d been referred to me,” DiRé explained. “I was too new to the business of practicing therapy to have any set predispositions surrounding how to work with anyone. I had to think outside the box. And at the same time, I just so happened to be getting my certification in trauma healing.”

One of the things both DiRé and Castle explained about ARFID is that unlike other eating disorders, ARFID doesn’t have anything to do with body image or a desire to lose weight.

Instead, it’s often trauma-based, resulting from some incident early on that convinces these children eating the foods they’re afraid of might actually kill them.

It could be a choking incident. For babies born prematurely, it might be triggered by those months spent in the NICU with tubes running in and out of their mouths and noses.

It really is a sensory condition, where the fear of even having foods deemed “unsafe” in their mouth can be crippling.

“These kids, and adults, suffering from ARFID truly think if they eat these foods, they will die,” DiRé explained.

How to treat the disorder

Despite the extremes, ARFID is a treatable condition, as long as you are working with someone who is knowledgeable about the best treatment options.

“You really need to work with someone who works with tissue,” DiRé explained. “This isn’t a mechanical issue, so there’s no need for swallow therapy or suckle therapy or speech therapy. Treating ARFID requires understanding trauma to tissue.”

“Beyond that,” she said, “if it’s treated like food exposure, where you try to force certain foods through steps, you can actually activate and increase the symptoms even more. That’s like putting these kids in front of a firing squad. I’ve heard of practitioners trying this, and while their intentions are great, they don’t understand ARFID enough. What works for anorexia or bulimia or binge eating won’t work for this.”

“That said, it’s such a treatable condition,” DiRé went on. “In my practice, I typically see these patients about once a week for two years. After that, no more ARFID. This is especially true with teenagers, who seem to be the most motivated to not have ARFID. It affects their social lives so much and they are desperate to get over it — which is really the opposite of what we see with other eating disorders, where teenagers are often the most resistant to treatment.”

Rachel from Pennsylvania was one of those teenagers.

She was a sophomore in high school before she first heard of ARFID and realized that’s what she had been struggling with since at least as early as age 7.

“A friend of mine asked me if I had an eating disorder,” she told Healthline. “She didn’t ask in a way that was judgmental or inappropriate, which is how it had always been brought up before (people seeing my size and automatically assuming that I had anorexia). I told her I didn’t — I’d never had issues with body image, so I’d had no reason to suspect my food issues were anything other than a lack of interest. But a few weeks later, I Googled it and I knew immediately. The DSM criteria was an exact reflection of my life. It brought me to tears. Finding out it wasn’t my fault, that it wasn’t something I did to myself, was the most empowering feeling ever.”

Even when she had the diagnosis in hand, though, it still took four years for her to find a practitioner willing to listen to her.

“ARFID is still relatively unknown, including to many health providers,” said Rachel, whose last name was withheld for privacy reasons. “Since nobody knew what I was talking about when I brought it up, I didn’t really have access to treatment — or to people who were even remotely familiar with the diagnosis.”

“Going so long without treatment took a toll,” Rachel said. “I slowly got worse, my list of ‘safe foods’ got smaller and smaller. I started to experience physical symptoms (dizziness, headaches, losing feeling in my hands and feet, extreme temperature sensitivities, and other random pains) because of being malnourished. And for a while, I gave up seeking treatment. Nobody knew what it was, so I figured I would just have to live like this. That was a terrifying reality. My greatest fear was that I’d wake up and all of my remaining foods would suddenly be disgusting to me. I was so afraid that eventually, there would be nothing left.”

Rachel, though, didn’t have to see that reality come to fruition.

In college, she was able to finally get a diagnosis and last September she began outpatient treatment.

“I started seeing a therapist, nutritionist and psychiatrist,” she said. “Slowly but surely, I’m gaining weight (about 15 pounds since starting treatment) and expanding my diet. It’s slow, but I’m getting confident and feeling better than I thought possible.”

As someone who has been there, done that, Rachel has advice for parents who might suspect their child is struggling with ARFID.

“Don’t guilt or shame your kid into trying a new food,” she said. “Try to avoid pointing out how they’re missing out or how sad and frustrating it is that they can’t eat what everyone else is eating. Chances are, they’re already internalizing those feelings. They may already feel awkward, embarrassed, and guilty.”

Castle had advice of her own for parents in this position.

“There’s a lot of anxiety that goes along with this,” she said. “And a lot of times, that piece gets overlooked. Then it just gets bigger and bigger. The anxiety around food can be pretty debilitating if it doesn’t get addressed.”

“As a parent, familiarizing yourself with some of the resources that are out there is huge,” she added. “I really do believe that parents know when something is wrong, but it can sometimes be hard to find a practitioner who will listen. So familiarize yourself with the diagnostic criteria, and don’t give up.”

All these years later, Jayce Walker is thankful his mother did just that.

At 13 years old, he told Healthline, “I was really little when I went to all of the therapies, and I don’t remember them very well. I can’t imagine only eating pancakes. I’m glad I try so many other foods now because they are really good.”