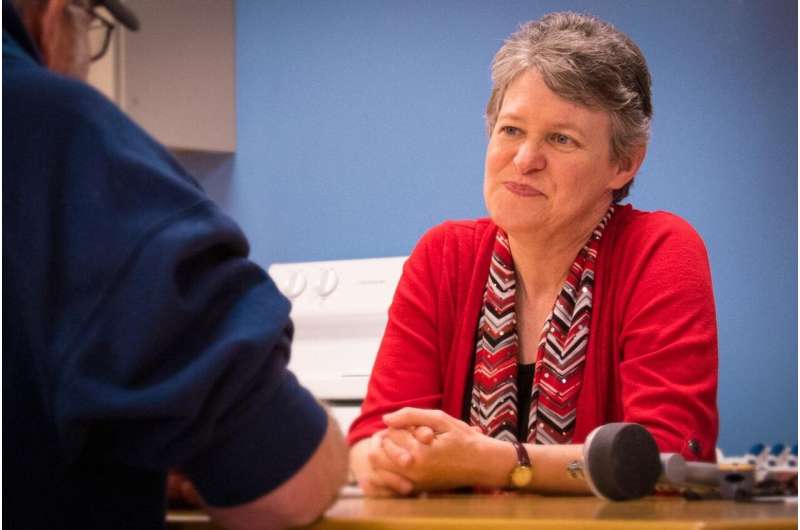 When you think of ways to treat opioid use disorder, you might think methadone clinics and Narcotics Anonymous meetings. You probably don’t imagine stretches and strengthening exercises.

But Anne Swisher—professor at the West Virginia University School of Medicine—is working to address opioid misuse in an unconventional way: through physical therapy. She and her colleagues have enhanced physical therapy instruction at WVU to emphasize the profession’s role in preventing and treating opioid use disorder.

“Students have different interests and passions within the profession, and they find their niche,” said Swisher, a researcher and director of scholarship in the Division of Physical Therapy. “No matter what their passion is, there is a way they can make a difference, whether it’s by preventing people from starting down the road of opioids—by minimizing pain medication and doing movement interventions—or whether it’s by helping people in the recovery process become healthier overall.”

Swisher and her team devised a model to show doctor of physical therapy students how key topics in their curriculum—such as women’s health, pediatric care and sports therapy—could all address opioid use disorder in various ways.

Their model—which was published in prestigious rehabilitation journal Physical Therapy—is innovative because it goes beyond musculoskeletal issues and addresses how physical therapists can assist people across the lifespan, from neonatal to hospice settings. It also illustrates how physical therapists can help improve human movement across what Swisher calls the “whole addiction spectrum.”

“In our curriculum, our students learn about all of these different aspects—what to do with somebody who’s critically ill, the appropriate developmental milestones for children, how to help older people stay active—but it was really just a matter of connecting it all together,” she said.

For instance, by making it easier for pregnant women to manage their aches and pains without opioids, physical therapists can help prevent neonatal abstinence syndrome in newborns. By combining special exercises with pharmacological treatment, they can reduce opioid use in patients after spinal surgery. And by promoting healthy physical activity in general, they can support people as they recover from opioid use disorder.

“I think it comes back to movement,” Swisher said. “One of the catchphrases we like to use is, “Motion is lotion for the joints.” And we know that regular physical activity releases the body’s own opioid chemicals. That’s the so-called ‘runner’s high’ that makes us feel good. Physical therapists can partner with people to work through their barriers to becoming more physically active.”

What are some of those barriers? Well, it depends. An overweight patient may find movement difficult because he has knee pain. A patient recovering from hip surgery may fear the pain of exercise so much that she avoids attempting it. And a new mom may find caring for her baby so overwhelming that even a walk around the block feels herculean.

“Pain is always a perception,” Swisher said. “It is always influenced by your own experiences, your motivation. If you get a tattoo to celebrate something monumental, you’re causing tissue damage, but you don’t perceive that as painful as putting your hand on the stove accidentally. We’re educating our students—and our colleagues—to understand that whole context working with pain.”

As described in the article, she and her team also incorporated their model into the clinical rotations that DPT students complete in rural Appalachian communities. As part of their rotations, the students choose a topic to develop into an educational program for a specific population in their community. They research issues specific to that community and consider those issues when designing the program.

“So, you get a small group of students who love women’s health,” Swisher said. “Maybe they develop an exercise program for women who have had babies that might have chronic pelvic pain.”

All of the programs are stored electronically so that as the students make their way through their rotations, they can access each other’s programs and work with their own clinical supervisors to tailor them to the communities they’re serving.

“I think when we’re looking at any kind of healthcare provider going into these rural communities that are really struggling with addiction, you have to look at those psychosocial and emotional reasons why people might find a desire to escape some pain, whether they perceive it as physical pain or whether it becomes more of an emotional pain,” Swisher said. “We have to consider how we as physical therapists interact with people as complex, bio-psychosocial individuals.”

The complex, bio-psychosocial individuals who call Appalachia home have been disproportionately affected by the opioid crisis. Appalachians are more likely to die prematurely than people who live elsewhere in the United States, and opioid-related deaths are a main reason for this disparity, reports the Appalachian Regional Commission.

West Virginia, in particular, has been hit hard. In 2018, the state had the nation’s highest rate of opioid-involved overdose deaths, according to the National Institutes of Health. That same year, healthcare providers in the state wrote 69.3 opioid prescriptions for every 100 West Virginians. The national average? Just 51.4.

Preparing the next generation of physical therapists to deal with opioid use disorder is important because “there’s such a huge issue here in Appalachia, especially in rural communities,” Swisher said.