A new blood test to be offered by GPs could flag up heart disease at a much earlier stage than is currently possible, sparing patients severe symptoms and potentially saving lives.

The £15 test has been shown in studies to be 98 per cent accurate and results are available within three days, meaning that heart patients no longer face an agonising wait to be referred to a specialist clinic for scans.

The test works by examining the blood for a protein that helps to regulate blood pressure and fluid around the heart.

When the heart muscles begin to strain, larger amounts of the protein – brain natriuretic peptide (BNP) – are released by the heart and it is detectable in the bloodstream.

At present, heart failure is often diagnosed only when sufferers are experiencing breathlessness, fatigue or swollen legs and ankles.

Typically, GPs refer patients to a specialist at a hospital for further tests to examine the electrical activity of the heart, and X-rays to check for damage or excess fluid.

However, most patients have to wait months for results, by which time their condition is likely to worsen, increasing the need for major heart surgery and the risk of sudden death.

The new blood test takes 15 minutes and can be performed by a GP, with results available to patients within three days.

Individuals can be diagnosed that same week and put potentially lifesaving changes into practice, such as adopting a healthy diet, exercising and taking medication to protect the heart.

The blood sample is extracted from a vein in the arm (like any blood test) and is then sent to a laboratory. There it is examined for the presence of BNP, which is released from the heart and rises when the coronary arteries become stretched and are struggling to pump blood round the body, a typical scenario in heart failure.

Of the seven million Britons with cardiovascular disease, more than half a million will suffer heart failure – the gradual weakening of the heart muscles. One victim was the singer George Michael, who was reported to have been suffering from dilated cardiomyopathy with myocarditis – a form of heart failure – when he died suddenly in 2016.

The new test specifically targets heart failure, which is estimated to account for almost 70 per cent of all costs to NHS hospitals.

Heart attacks, which occur every three minutes in Britain, can lead to heart failure because constricted blood flow to the heart can add strain to the muscles. Other causes include high blood pressure, irregular heart rhythms such as atrial fibrillation, anaemia and birth defects.

Despite the new test being recommended and approved by the NHS watchdog, the National Institute for Health and Care Excellence (NICE), in 2010, new figures from heart charity Pumping Marvellous show that just a fifth of GPs are offering it to NHS patients. 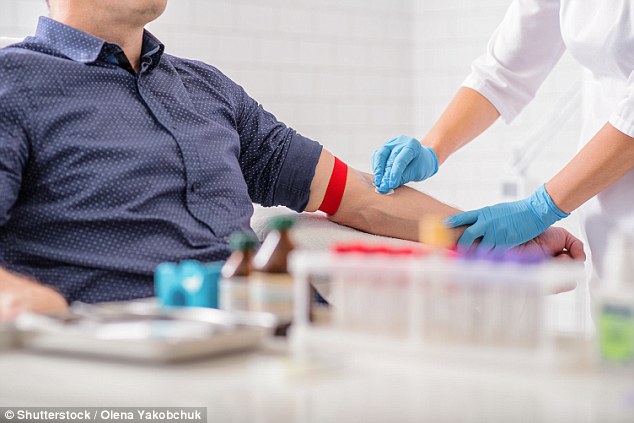 A new blood test to be offered by GPs could flag up heart disease at a much earlier stage than is currently possible, sparing patients severe symptoms and potentially saving lives. (File image)

Martin Cowie, Professor of Cardiology at the Royal Brompton Hospital in London, said: ‘We have known for many years that there is a simple blood test that can help rule out the life-threatening condition of heart failure.

‘It is vital that this simple test is used for anyone who may have this condition as the right diagnosis quickly unlocks early treatment.’

Clinical Commissioning Groups (CCGs) decide whether the test is funded for patients in any given area.

She adds: ‘I can do a simple blood test to check the level of a protein which goes up when the heart is working too hard. The blood test is really key to diagnosing heart failure – then we can get on with treating the patient.’

Nick Hartshorne-Evans, heart failure sufferer and founder of Pumping Marvellous, says: ‘There is a great deal of ignorance about heart failure, with many people thinking it means instant death. This is not the case. All the evidence is that the test points to a higher chance of a better prognosis and quality of life for this serious life-threatening condition.’

The 47-year-old was diagnosed with heart failure at just 39, after five weeks of being dismissed by his GP. ‘I was sent away with cough medicine and antibiotics,’ he says.

‘It was only when I found myself struggling to walk that I was rushed to A&E and discovered my heart was failing.’

NICE is expected to issue new guidance in the coming months to reinforce its 2010 guidance on the use of the BNP test.