Marital spats may cause disease: Couples who argue have higher levels of inflammation

How marital spats might open the door to disease: Stressed couples who criticise each other and roll their eyes during arguments have higher levels of dangerous inflammation

Couples who criticise each other and roll their eyes during disagreements have higher levels of inflammation, a study found.

Argumentative spouses are also more likely to suffer from so-called leaky guts; a proposed condition that some doctors claim may be behind long-term disorders like chronic fatigue and multiple sclerosis.

Lead author Dr Janice Kiecolt-Glaser, from Ohio State University, said: ‘Marital stress is a particularly potent stress, because your partner is typically your primary support and in a troubled marriage your partner becomes your major source of stress.’

‘We think that this everyday marital distress – at least for some people – is causing changes in the gut that lead to inflammation and, potentially, illness.’

People can reduce their gut inflammation by eating a healthy diet rich in good fats, vegetables and whole grains, as well as by taking probiotics, the researchers add. 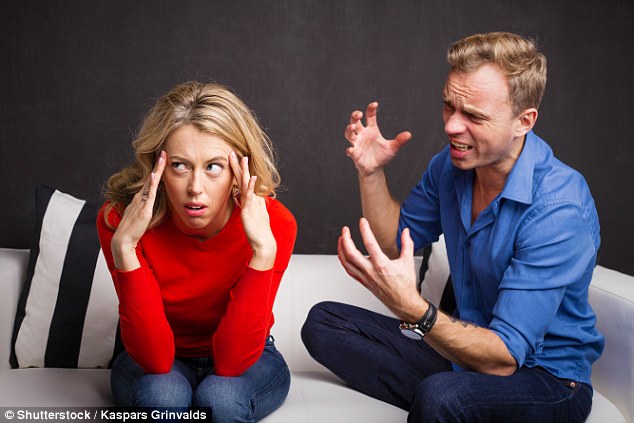 Marriage spats may cause disease: Couples who criticise each other and roll their eyes during disagreements have higher levels of inflammation, research suggests (stock)

WHAT IS LEAKY GUT SYNDROME?

‘Leaky gut syndrome’ is a proposed condition that some doctors claim may be behind long-term disorders, such as chronic fatigue and multiple sclerosis.

Although it is not medically recognised, some believe it is caused by the immune system reacting to germs, toxins and other substances being absorbed into the bloodstream via a porous bowel.

There is little evidence supporting the theory that a porous bowel causes health problems or that ‘treatments’, such as herbal remedies, are effective.

If leaky, this barrier becomes less effective and may lead to a host of health concerns.

A leaky gut barrier may be caused by alcohol or aspirin, which irritate the bowel lining but usually just cause mild inflammation.

Conditions such as Crohn’s, coeliac disease and sepsis may also increase intestine permeability.

Food allergies, asthma and autism are also claimed by some to cause the gut wall to become ‘leaky’.

The researchers analysed 43 healthy married couples aged between 24 and 61 years old. The spouses had been married for at least three years.

The couples were encouraged to discuss topics they disagreed on, such as money or in-laws.

These discussions lasted 20 minutes and were videotaped.

The scientists then watched the footage and noted any hostile behaviours, such as eye rolls and criticising each other.

Blood samples were taken from the couples before and after their disagreements.

‘Depression and a poor marriage – that really made things worse’

Results suggest couples who demonstrate hostile behaviours while having disagreements have higher levels of the protein LBP, which is associated with leaky gut syndrome.

Those with the highest LBP also have 79 per cent greater levels of C-reactive protein, which is a marker of inflammation.

Evidence of a leaky gut and inflammation is particularly high in hostile married couples when one of the spouses has a history of depression.

Dr Kiecolt-Glaser said: ‘Depression and a poor marriage – that really made things worse.’

The researchers believe leaky guts increase the levels of bacteria in a person’s blood, which drives inflammation that could lead to mental-health problems.

Due to the study’s participants having an average age of 38, the scientists add older married couples who argue may be at an even greater health risk due to inflammation increasing with age.

The findings were published in the journal Psychoneuroendocrinology.