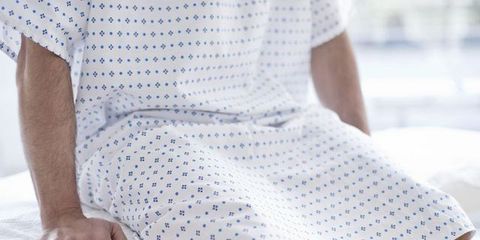 Here’s a horrifying story to prove why you should never ignore problems with your genitals: An 82-year-old man’s penis fell off due to untreated cancer.

According to a BMJ Case Report, the man first went to a primary care facility complaining that he’d had an ulcer on his penis for a year, swelling in his groin for two months, and that his penis had been shedding skin for a month. Doctors gave him antibiotics and drained the swollen areas.

When he was referred to the case report’s authors around two weeks later, an examination “revealed almost complete loss of phallus.” In other words, most of his penis had fallen off — a phenomenon known as auto-amputation. (You can read the full report to see the gruesome photo here.)

Doctors tested the remaining tissue and discovered the patient had a type of skin cancer known as squamous cell carcinoma. Typically, this type of cancer causes scaly red patches, open sores, warts, or growths, according to the Skin Cancer Foundation.

The man’s cancer had progressed too far for doctors to treat it, so he received palliative care to help him manage his symptoms. He died 15 days after visiting the hospital.

Dr. Gaurav Garg of King George’s Medical University in India, who treated the patient, told MensHealth.com in an email that the ulcer developed on the penis. Without medical attention, Garg explains that the cancer can spread quickly.

“We have seen that untreated penile squamous cell carcinoma metastasizes to the groin and the lungs in a span of three to six months if not intervened,” he said. “This is based on the fact that many patients refuse treatment initially and later on present with advanced disease.”

Don’t worry: The chances of this happening to you are small. By Garg’s best estimates, to date, there have been fewer than 10 reported instances of penile auto amputation related to squamous cell carcinoma.

Still, you should never ignore changes on your privates, as they could signal a multitude of health problems including cancer or sexually transmitted infections. Check out our list of 10 penis problems you should never, ever ignore.