Knife crime ‘epidemic’ is straining the NHS, warns surgeon: Victims use up hospital beds and blood supplies and paramedics are forced to wear stab proof vests

England is in the midst of a national knife crime epidemic which is putting extra pressure on the NHS, a top surgeon has warned.

The rise in violent stabbings seen in London in recent years has spread to the country’s other major cities, according to Adam Brooks, a major trauma surgeon at Nottingham University Hospitals NHS Trust.

He said he had seen a dramatic increase in stabbings and his team now deals with around three serious cases a day.

And 31 out of 39 police forces across the country – 79.4 per cent – reported a rise in stabbings last year.

Mr Brooks said: ‘This is an epidemic. It’s across our urban centres, not just London. It’s a disease we need to work closely together to try to control as best we can.’ 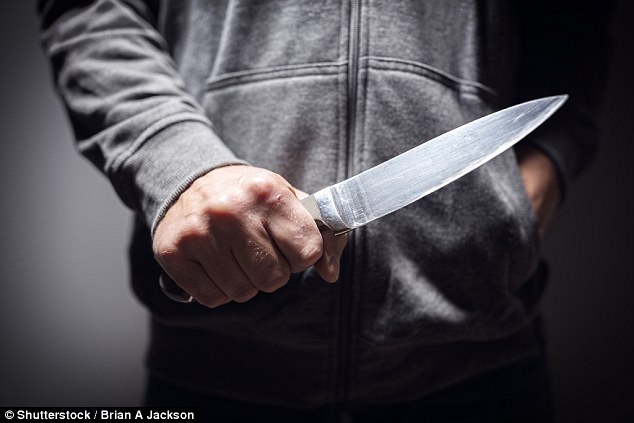 Speaking at the Royal Society of Medicine’s Spotlight on Knife Crime event in London yesterday, he said the number of young victims was ‘increasing massively’.

He said his trauma centre had treated as many 15 to 25-year-old stab victims in the last five months as it had in the whole of the previous year.

Doctors at the unit expect to treat 170 to 180 stab victims this year – the highest number to date.

Mr Brooks said: ‘These are trauma calls – these are not minor emergency department presentations.

‘Unfortunately penetrating violence is not a London phenomenon… This is something we’re all seeing, in all the urban trauma centres.

‘This isn’t just London – this is everywhere’

‘It really has changed, across the country. The key message is this isn’t just London – this is everywhere.’

He said the increase in serious injuries was putting a strain on the NHS, pointing to a case of one youth who suffered a single stomach stab wound but ended up spending four and a half months in hospital because of the extent of his internal injuries.

WHICH REGIONS HAVE THE MOST KNIFE CRIME?

Statistics published by the Government in June revealed London has the highest rate of knife crime, with 137 incidents per 100,000 people in 2016/17, and Wales the lowest, with 29.

Stabbings require immediate medical attention to stop bleeding and repair the body but problems like organ damage or infection can mean recovery takes much longer.

Mr Brooks also revealed supplies of blood for transplants was dropping, in part because sunny weather has reduced people’s attendance at donations.

NHS Blood and Transplant told The Times: ‘If we don’t collect enough O negative blood donations in the coming weeks, stocks may fall below two days.’

Commander David Musker, of New Scotland Yard, told the event that there had been 45 knife crime incidents a day in London in July, and five-and-a-half knife injuries a day.

He said the numbers were ‘stabilising’ but police were ‘not calling it a success’ yet.

He told how, on Monday night, he had put on a stab vest before he left the ambulance station to attend a stabbing at a tube station where a ‘chaotic’ crowd of 200 to 300 people, many filming on mobile phones, gathered around the paramedics and the victim.

He added: ‘We are seeing an increase in severity of injuries.’

Stabbings linked to groups outside schools

Trauma surgeon Duncan Bew, of King’s College Hospital, London, one of the trauma units in the hospital’s network said victims are getting ‘younger and younger’.

And now nearly as many girls as boys are being seen, with incidents linked to groups of youths gathering outside schools.

He added: ‘[We see] spikes in violent activity when people come out of the school gates, which is really sad.’

Official statistics show 31 out of the 39 police forces in England experienced rises in knife crime rates of between 2 and 53 per cent last year.

More than a third (37 per cent) of all knife crime in England and Wales last year was committed in London.

HOW TO HELP SOMEONE WHO’S BEEN STABBED

The Red Cross issued advice in a blog in 2014 on what to do if you find someone who has been stabbed.

The most important thing to do is call an ambulance immediately – phone 999 or 112.

You should also put pressure on the wound to try to reduce bleeding.

If there is an object in the wound – such as a knife – do not remove it because it could make the bleeding worse. Instead, apply pressure around it.

If the victim feels cold, looks pale and is dizzy it means they are losing a lot of blood and are at risk of life-threatening shock.

In this situation continue applying pressure to the wound and, if it is safe to do so, lie them down and lift their feet higher than the rest of their body to increase blood flow to their brain and heart.

You could also keep them warm if necessary by wrapping them in clothes or blankets.