Incredible pictures reveal remarkable 10-month recovery of mother, 44, who was left with third degree burns after she fell face-first onto a red-hot barbeque

A mother-of-three has managed to avoid serious scarring on her face despite suffering third degree burns when she fell head-first onto a red-hot barbeque.

Mrs Morelli Benford had been trying to move the barbeque’s metal grate when she noticed the fire was too big and the metal was glowing orange and bending.

She tripped and fell onto the grill, causing her to pass out on the scalding metal, but her husband quickly pulled her off and wrapped her face in cold wet towels.

She screamed when she saw her face in the mirror for the first time, and in the following days her face swelled up so much her eyes were almost closed.

But now, 10 months later, Mrs Morelli Benford has improved her scars with a meticulous skincare routine and says she wants to encourage people to see past physical differences. 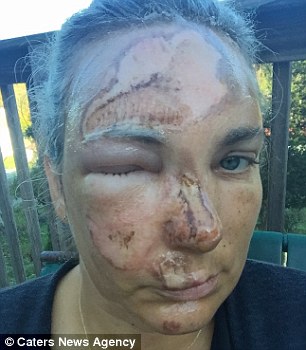 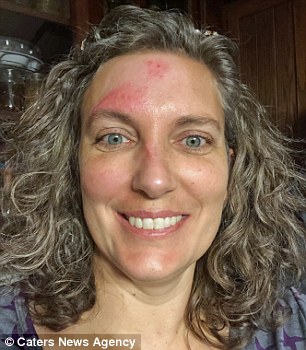 Mrs Morelli Benford  suffered third degree burns to her face after falling onto a barbeque 10 months ago (pictured left) but, thanks to a meticulous skincare regime, she has made an incredible recovery and been left with only minor scarring (right, pictured recently)

Mrs Morelli Benford, a carer, says she looked like a ‘monster’ and like the Marvel character Two-Face due to the burns which mainly affected the right side of her face.

Instead of being embarrassed or hiding away, the burns survivor now shows her scarring in public.

Mrs Morelli Benford said: ‘It was such a freak accident, you would never think in a million years something like this could happen.

‘I remember falling and I don’t remember much after that, my husband says I was lying on the grate when he pushed me off.

‘I went into shock and just sat there on the deck.

‘My husband saved my face and life, his instinct as a firefighter kicked in and he wrapped my face in cold wet towels.

‘I wear both contacts and glasses, I had glasses on that day and had I not I would have lost my eye. I feel very lucky.’

Mrs Morelli Benford says her injuries were marked in the shape of the grill from the barbeque, and describes her skin as ‘like crepe paper’.

The seriousness of a skin burn depends on how deep it goes, with first degree burns just affecting the top layer and third degree burns damaging skin down to the tissue beneath it. 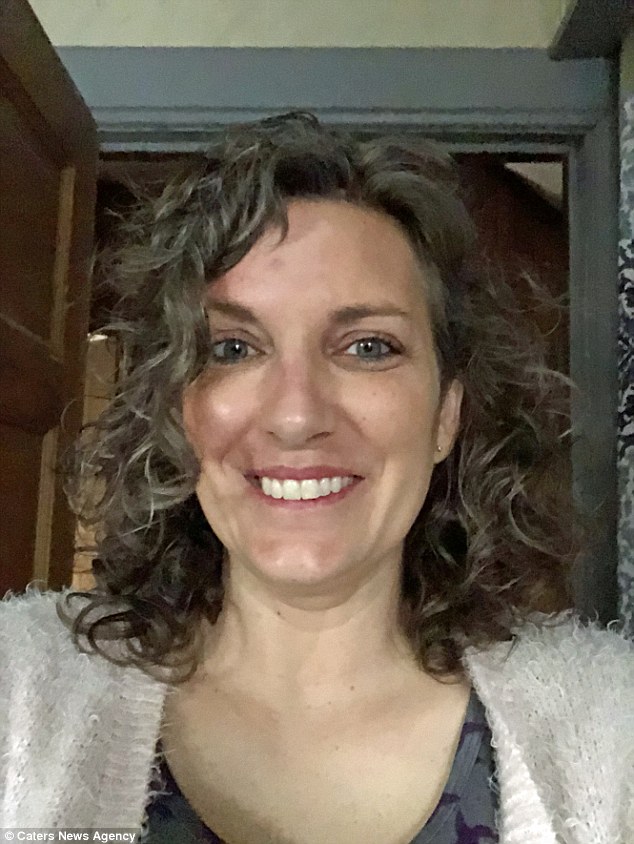 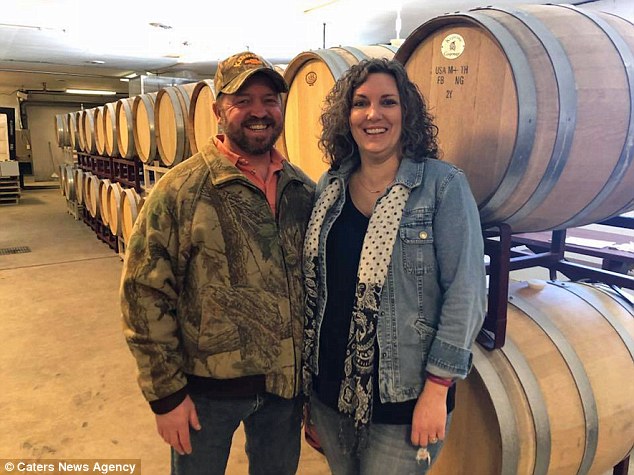 Mrs Morelli Benford says her firefighter husband, Sheldon, 49 (pictured with her), saved her life when she passed out after falling onto the red-hot grill 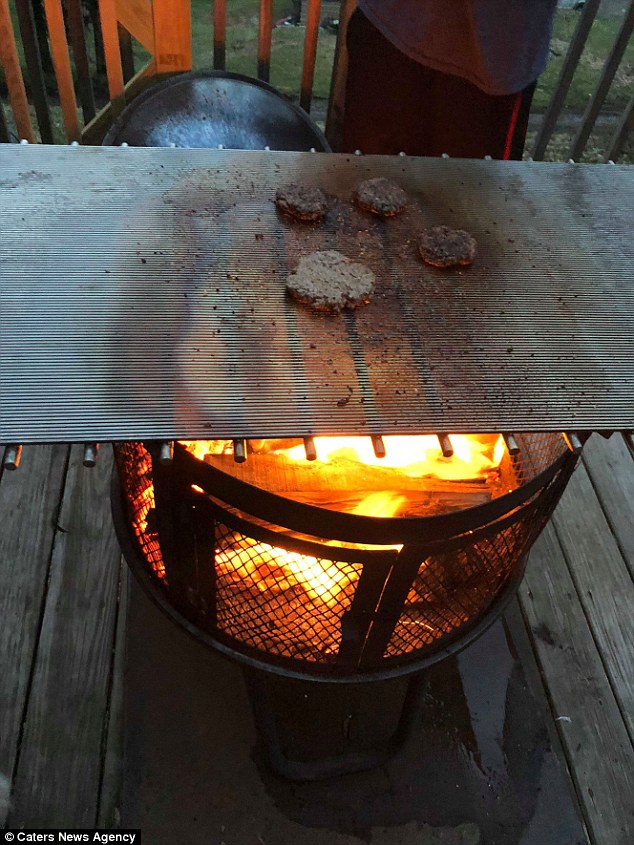 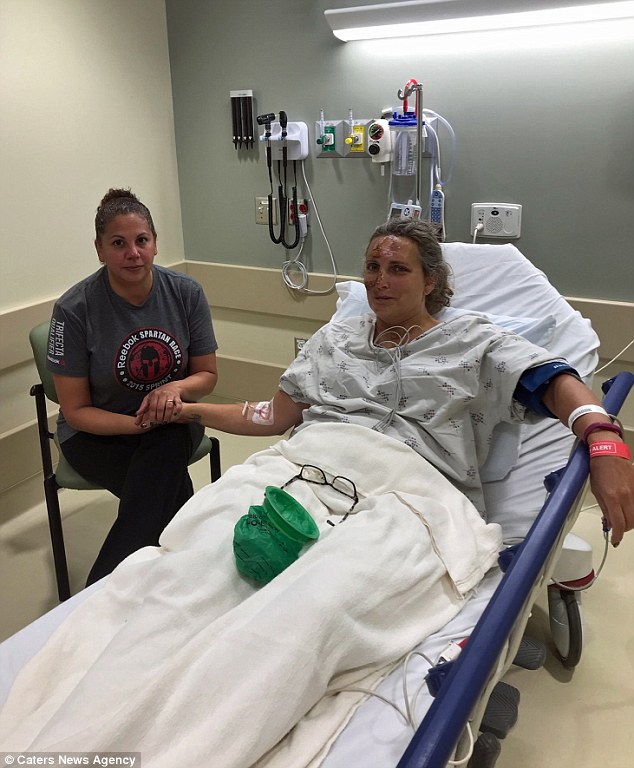 Mrs Morelli Benford had to keep her face as clean as possible so it did not become infected, and she uses various oils and moisturisers to help the skin heal

‘Almost half my face was burned,’ Mrs Morelli Benford said.

‘I had third degree burns above my eye and one on my nose, then second degree to my forehead and cheek, then first degree to my lip and chin.

‘I remember seeing the burn in the mirror and screaming’

‘I remember seeing the burn in the mirror, that’s when I came to a little bit and remember screaming.

‘I didn’t want anybody to see me, I thought I looked like a monster.

‘You could see the grid marks on my face and grate marks, my face looked like crepe paper. I thought I looked like Two Face from the Marvel comics, it was terrible.’

While Mrs Morelli Benford is lucky to have not suffered worse injuries, she must maintain her cleansing and moisturising routine to help her skin recover.

She uses a variety of moisturisers and creams and must clean her face regularly to make sure it does not become infected. 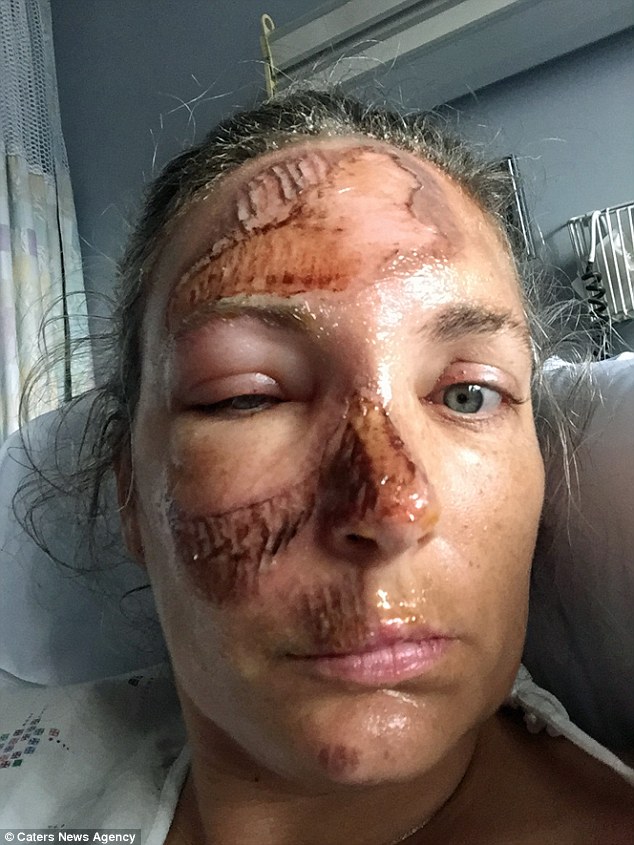 Mrs Morelli Benford says she screamed when she first saw herself in the mirror after the accident, worried she looked like the Batman villain Two Face The severity of Mrs Morelli Benford’s burns varied across her face, with third degree burns above her eye and on her nose, second degree  on her forehead and cheek, and first degree on her lip and chin 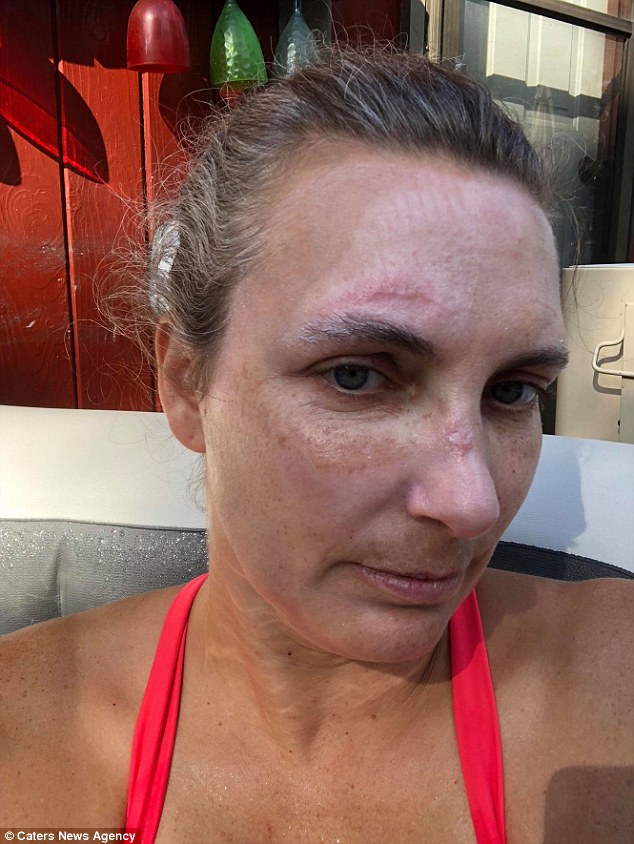 ‘My husband is my hero now’

‘I’m fortunate as my skin is getting better each day and week,’ she said. ‘Some people say you wouldn’t even notice the scars.

‘People tell me they cannot believe how good my face looks.

‘My husband is my hero even more now, if it wouldn’t have been for his quick thinking it could have been a lot worse.’

Despite the injuries to her face, Mrs Morelli Benford was fortunate that she did not break any bones or suffer any damage from smoke inhalation.

She said: ‘I burned all my nerves above my eye and nose, that was crazy and hurt a lot. 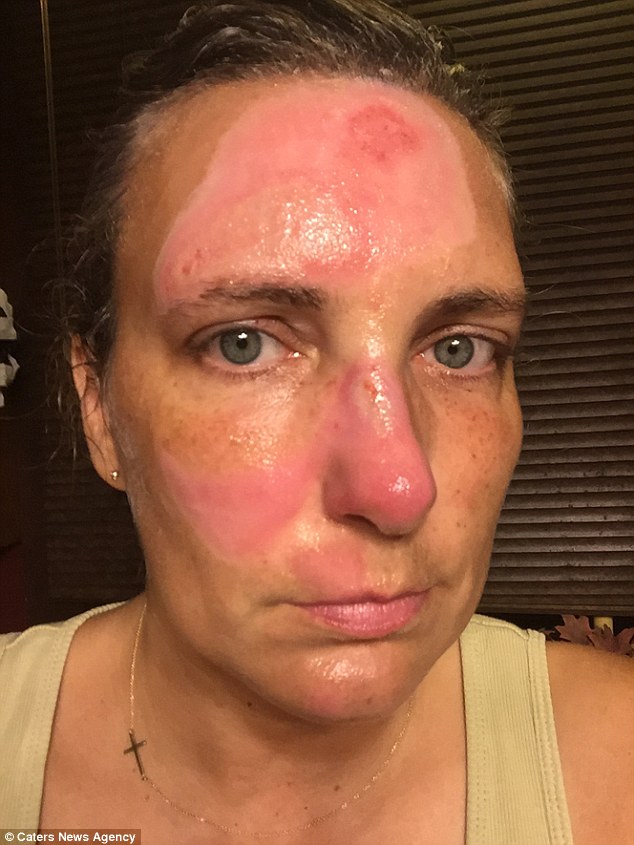 Mrs Morelli Benford says she burned the nerves above her eye and nose, where the injuries were worst, and when they healed it felt ‘like a bug zapper’

‘Over time, I could feel the nerves coming back, it was like someone tattooing your eye or using a bug zapper, it felt bizarre.

‘But the part that really hurt was having to clean it four times a day. I can take a lot of pain but at times I thought I was going to pass out.

‘Burns can get infected so easily I was almost obsessively keeping it clean and hydrated, especially because it was on my face.

‘Maybe I’m a little vain, but it’s my face and you want to keep it nice, I have a good serious skin routine going on now.’

Mrs Morelli Benford initially struggled to deal with the stares in public, often trying to hide her face and look away to not catch the eyes of others. Regina Morelli Benford and her husband Sheldon pictured with (from left) their daughter Rosie and her fiance Dylan, and their other sons Ian and Alex 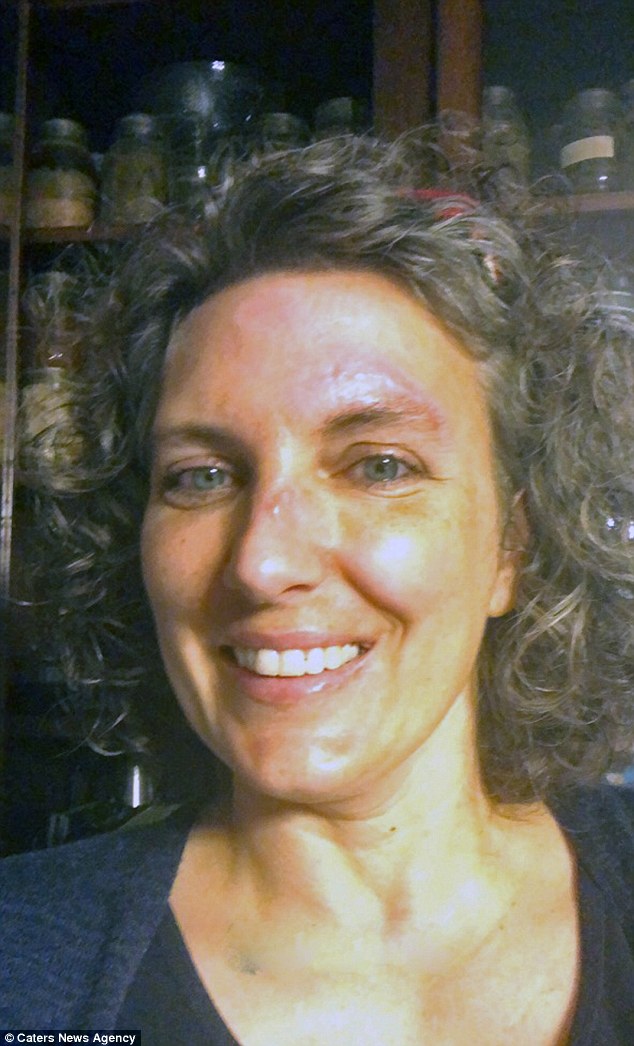 But over time, she found the courage to and knew she wanted to set a good example for her children.

Mrs Morelli Benford said: ‘Because I burned my face it was very hard for me to go out, but I figured I couldn’t hide forever and maybe others would feel more confident too.

‘I have nothing to be ashamed of’

‘At first people would stare and it was very unnerving, walked with my head down but thought this is not me, I have nothing to be ashamed of.’

She uses essential oils, organic rose water, vitamins B5 and E, along with other moisturisers and is taking measures to cover herself up to avoid further damage.

This includes wearing high factor sunblock and hats, as any sunburn could permanently discolour her skin. 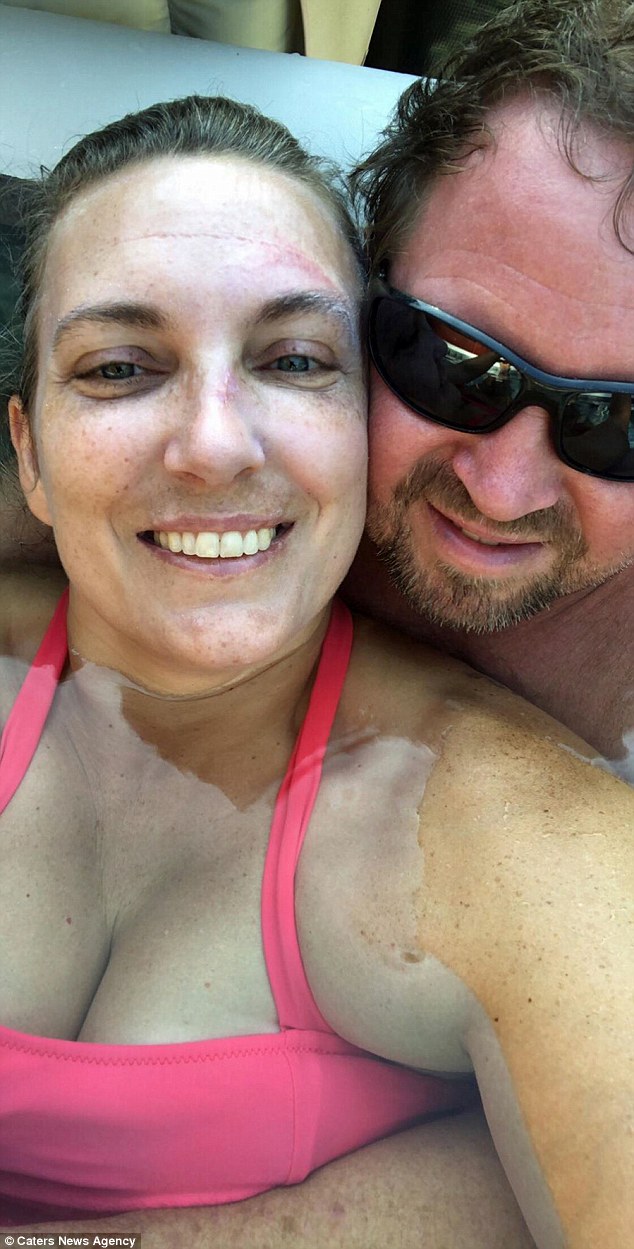 Mrs Morelli Benford credits her husband for her recovery and says: ‘My husband is my hero even more now, if it wouldn’t have been for his quick thinking it could have been a lot worse’

Mrs Morelli Benford said: ‘I was told it could take two years until the pigmentation matches and if I get sunburned or anything it could make the skin in that area darker or lighter.

‘I have to use very high sunblock and wear big hats, I’m kind of a diva, I like the hats and sunglasses.’

‘Hopefully people will see my smile, not my scars’

Mrs Morelli Benford hopes by proudly showing her scarring that it will encourage others not to be embarrassed.

She added: ‘Hopefully, when people see me they see my smile, my personality and positivity, not my scars.

‘You have to be yourself and look the world in the face, there will always be somebody who finds something to pick on, stare or laugh at.

‘Those people are not happy with themselves, so be happy with yourself smile and make it infectious.’

HOW CAN SKINCARE MINIMISE SCARRING?

When a large area of skin is damaged it scabs and scars as part of the natural healing process.

Scars are often permanent and will look different to the surrounding skin for a long time because they are made of slightly different, fibrous tissue instead of the same skin. But looking after a wound can help scars to fade to appear normal again.

Washing a wound soon after the skin is broken is important, in order to stop an infection which could damage the skin even further.

Injuries should then be kept clean until the skin has completely healed.

Skin will naturally scab as it heals, but using a moisturiser like petroleum jelly (Vaseline, for example) will prevent the scab from drying out and causing the skin to crack.

And don’t pick the scab – if it comes off before it is ready or bleeds it is only causing more damage to the skin beneath.

Once the scab is gone and the new skin is revealed, it should be moisturised regularly – the layer of skin holds moisture in may be damaged, which could cause the scar to dry out and crack or become tight.

It is important to put sun cream on a scar because they are more susceptible to burning, and become more visible than surrounding skin when they have been in the sun.