How Britain’s got hooked on steroids: 500,000 are now addicted to muscle-enhancers as rates soars ten-fold in a decade – and experts say social media and reality TV may be to blame

Steroid addiction has increased tenfold over the last decade and specialists say the UK is ‘sleepwalking into a health crisis’.

Half a million people – mostly young men – are addicted to physique enhancers, according to experts at Priory mental health services. They say social media and reality TV shows drive them to pursue unrealistic body goals.

Anabolic steroids are classified as class C drugs, meaning they are prescription-only, but they are readily available illegally online or via social media. 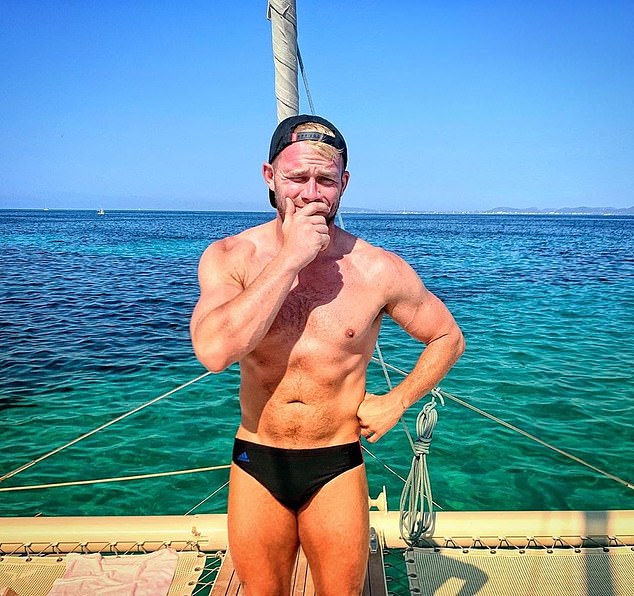 Half a million people – mostly young men – are addicted to physique enhancers, according to experts at Priory mental health services. Pictured above, personal trainer and author, James Smith, in 2022 after coming off steroids

Anabolic steroids are a manufactured drug that mimic the effects of the hormone, testosterone.

Normally, they are prescription-only medicines. When taken to increase muscle mass and improve athletic performance without medical advice, they can be addictive and have serious side-effects.

People who use anabolic steroids can crave them, an experience side-effects if they stop taking them.

Dr William Shanahan, clinical director of addictions at Priory’s Roehampton Hospital, said many users are unaware of the risks which range from ‘increased anxiety levels, depression’ to ‘erectile dysfunction and fertility issues… prostate cancer, and so much more.’

He said: ‘Ten years ago there were an estimated 50,000 users of image and performance-enhancing drugs in the UK, but we suspect this number may now be rocketing above 500,000.’

There is concern young men may take steroids to try to emulate the bodies they see on Love Island — a new series of which started this week.

Contestants on the show have openly admitted to taking the drugs before.

Last year a well-known previous contestant on the show, Tom Powell, said steroids are his ‘poison’ and decided not to stop taking them despite needing breast reduction surgery as a result.

More than 90 per cent of anabolic steroid users are men, according to a 2016 National IPEDinfo Survey, but Dr Shanahan says poor data makes it hard to know exactly how many there are.

Past estimates from crime statistics and the UK anti-doping agency have ranged from 302,000 to 1million steroid users.

He said: ‘My fear is we are sleepwalking into a health crisis, especially for young men.’

Steroid use is widespread on social media with users posting before and after pictures and sharing tips on where to buy the drugs and how to use them.

On TikTok, videos under the hashtag ‘steroids’ have 307.8million views, while #steroidtransformation has 52.9million views.

He said: ‘Men are sat at home in the UK and they see the world through this distorted lens… These average build guys think that they’re unusually small and skinny.’

One video on TikTok, shared by arnoldsteroids2, shows followers before and after photos of men on steroids followed by pictures of injectable testosterone and a voice-over urging them to ‘go beyond the breaking point’ in their pursuit of the perfect physique.

Comments under the video ask ‘where can I get UK’ and ‘what’s a good online store to get it’. 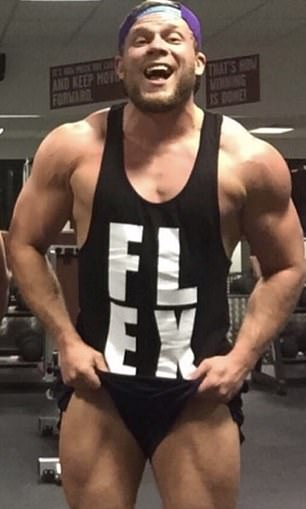 Personal trainer and author, James Smith (above), pictured in 2015 while on steroids

The deputy director of enforcement at medicines watchdog MHRA, Andy Morling, said: ‘The illegal online trade in medicines is undoubtedly a significant one. Although identifying the precise scale of internet supply is challenging, it is likely that illegally trading webpages number in the thousands, possibly tens of thousands globally.’

He added that global supply routes are complex but they are aware of products being imported from South Asia and Central and Eastern Europe.

Children as young as 16 are starting to take steroids. Personal trainer and author James Smith said: ‘Kids are not even out of puberty yet and they’re on [steroids], because they want to be famous on Instagram, they want big YouTube channels. They want a big TikTok following to impress girls at sixth form.’

A TikTok account called Brinsbit with nearly 12,000 followers shares photos of his steroid transformation. One of the videos is subtitled ‘If you are being ‘bullied’ be the bigger person! Of course when I say bigger I mean more muscled and anabolic, lol’.

Dr Luke Evans, MP for Bosworth, said the situation is ‘deeply concerning’. He added: ‘Images of guys with body builder-esque physiques are rampant online, which only encourages others to take the next step to ‘try to conform’ and dabble with steroids and similar products.

‘In my role as a GP before becoming an MP… It was commonplace to see patients coming in asking how they can ‘bulk up’.’

When The Daily Mail contacted TikTok, they removed the videos for breaching their community guidelines.

A TikTok spokesperson said: ‘The safety and wellbeing of our community is a top priority.

‘Our Community Guidelines are clear that we do not allow the depiction, promotion, or trade of controlled substances, including anabolic steroids, on TikTok.

‘We will take appropriate action against any violation of these guidelines, including removing videos and banning accounts.’

A Government spokesperson said: ‘Drugs ruin lives and devastate communities, which is why we are committed to tackling both the supply and demand for drugs, as set out in our 10-year Drugs Strategy.

‘Anabolic steroids are a Class C drug because of the physical and psychological harms they cause, and any companies in the scope of the Online Safety Bill must take action to prevent criminal activity relating to them.’

Men who abuse steroids can be left with low sex drive, poor erections and a low sperm count for YEARS

Researchers in Copenhagen, Denmark, tracked a biomarker of testicular function in the blood of current and former anabolic steroid users.

The biomarker is produced by cells in the testes that also produce testosterone, indicating anabolic steroids ‘persistently impair their capacity’.