Three gorgeous little brothers but only Luca, the designer baby can expect a long life as his siblings both have an incurable genetic illness

With their sparkling blue eyes and infectious giggles, the Taussig brothers look the picture of happiness as they play in the garden of their home.

Yet the two eldest boys – Theo, seven, and five-year-old Oskar – suffer from an incurable genetic disease which will see them grow weaker as they get older, and means they are unlikely to live past their teenage years. But their younger brother Luca will not suffer the same fate.

For Luca, now 20 months, was conceived using a special type of IVF, with doctors screening a series of embryos and choosing one that did not have the faulty gene that causes Duchenne Muscular Dystrophy (DMD), the condition suffered by Theo and Oskar. 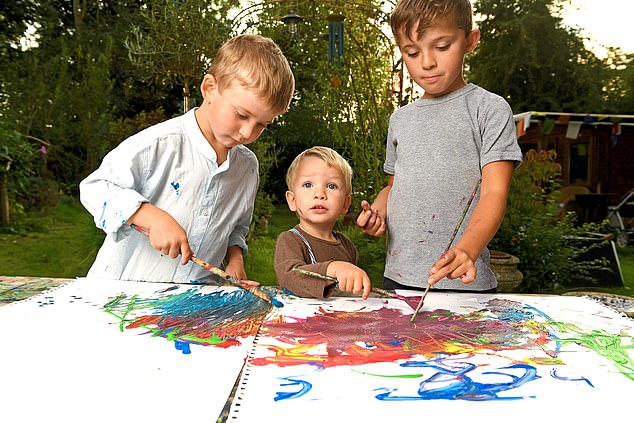 Luka Taussig, centre, pictured with his elder brothers Theo, left, and Oskar, right, was conceived using a special IVF technique which screened his genes to ensure he did not have the same genetic mutation as his siblings who both suffer Duchenne Muscular Dystropy (DMD)

For Nick Taussig and his wife Klara, Luca is a blessing, but also a reminder of the cruel march DMD.

Almost from birth, the difference between the Luca and his siblings was obvious: how he became stronger every day, while Theo and Oskar deteriorated. Nick, a 45-year-old film producer, says: ‘Luca was crawling at nine months and walking at 12 months. Duchenne children are like old men from the day they’re born and increasingly dependent on you for everything.’

Klara, who runs an after-school art club, adds: ‘Even now, Luca is stronger than his brothers, so if he pushes them or they fight, we have to do our best to explain to him that Theo and Oskar are weak and we need to look after them.

‘Theo and Oskar love having someone to play with at their level, and that’s what they’ve got right now – all of them laughing and being happy together.

‘Luca takes the seriousness out of our lives that before was so tiring – the endless trips to hospital, watching our boys deteriorate. Each day brings challenges but we’re counting our blessings.’

DMD affects boys who are born with a gene mutation that means they cannot produce dystrophin, a protein vital for muscle strength and function. Muscle fibres break down and are replaced by fatty issue. 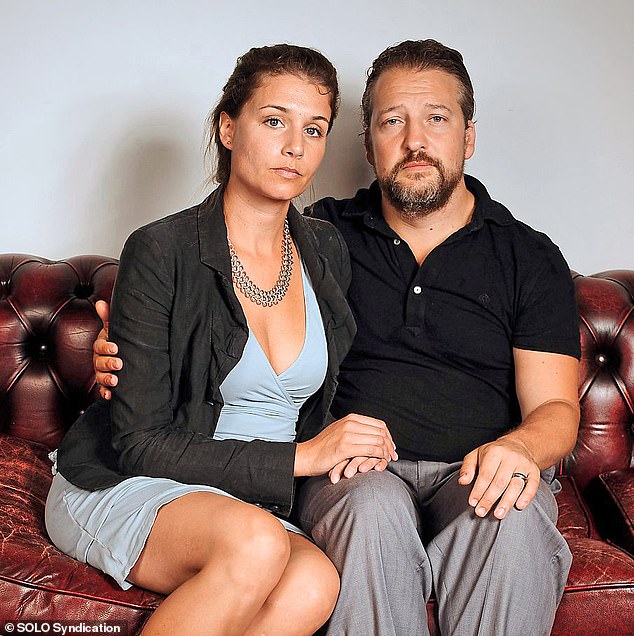 Klara and Nick Taussig, pictured, did not know one of them carried a defective gene until after the birth of their two eldest sons Theo and Oskar who inherited DMD

The condition is usually diagnosed between the ages of two and five, and there is a steady decline in muscle strength so that by the age of 12, many boys are confined to a wheelchair. Both Theo and Oskar rely on one as they cannot walk for more than ten minutes.

Although girls can carry the faulty gene, they rarely develop any DMD symptoms.

The unrelenting march of DMD

Duchenne Muscular Dystrophy affects about 2,500 children in the UK.

It is triggered by a faulty gene that gives the body instructions for making the protein dystrophin, and the lack of this means that muscle fibres throughout the body break down and are replaced by fibrous or fatty tissue.

The result is devastating, with patients gradually deteriorating until they are totally dependent on a wheelchair.

Duchenne affects mainly boys. Girls can carry the faulty gene without it causing symptoms. In around two-thirds of Duchenne cases, the genetic change is passed down through the family from the mother. A son born to a woman who carries the gene has a one in four chance of having Duchenne.

If a man with Duchenne has children with a non-carrier, their sons would not have Duchenne but daughters would be carriers.

While there is no cure – patients are generally treated with physiotherapy and steroids – drugs are becoming available, including Translarna (ataluren). It is shown to slow down the progression of symptoms.

The double diagnosis four years ago was incredibly difficult for Nick and Klara to contemplate. There was no family history of the illness, although they now believe Klara carried the faulty gene.

Nick says: ‘A year before, I’d approached Alex Smith of Harrison’s Fund, wanting to make a documentary about his attempt to complete an Ironman carrying his five-and-a-half stone disabled son Harrison the whole way.

‘I’d even written a pitch describing how Duchenne would slowly kill their son. Now this was our sons’ fate as well.

‘The gut-wrenching sadness meant we were unable to sleep or think. Every time I looked at our boys, all I could see was a slow, painful decline. They would never play rugby, never go to university, never realise their full potential.’

Three months after the diagnosis, the couple were offered free pre-implantation genetic diagnosis (PGD) IVF at St Thomas’ Hospital in London to enable them to have a child free of the devastating disease. PGD can be offered when one or both parents have, or are carriers of, a known genetic abnormality. The most popular testing is for sickle cell disease, cystic fibrosis, Huntington’s and DMD.

‘At first, we thought we had more than we could handle already, but slowly we came around to the idea,’ says Nick.

‘Of course, there would be negatives, bad days and situations that would be far from perfect, but we talked and agreed the positives would surely outweigh that.’

A healthy embryo was created during the second round of IVF and Luca was born in January last year. Today, the couple, from Box Hill, Surrey, say they try not to think about the future. ‘Luca will no doubt become frustrated at times that he can’t play with his brothers in the way he would like, while Theo is already upset that Luca can play football and he can’t. We just have to keep talking, communicating, listening,’ says Klara.

Theo now understands that he has Duchenne and describes himself as ‘disabled’. But his parents are striving to keep the boys in mainstream schools and for their lives to be as normal as possible. This is helped by Luca, whose presence makes his brothers more active. Although there is currently no cure, Theo is taking part in a trial to test a new drug which is hoped will slow the decline of muscle turning into fat.