Sleeping fewer than six hours impairs your ability to perform simple tasks – regardless of whether or not you feel rested, a new report warns.

The small study by Brigham and Women’s Hospital found most people do not notice the effects of under-sleeping, and even report feeling alert.

But when it came to carrying out certain tasks and memory tests, their attention span was flawed.

The researchers warn this finding should be a red flag to the millions of Americans who short-change themselves on sleep regularly. 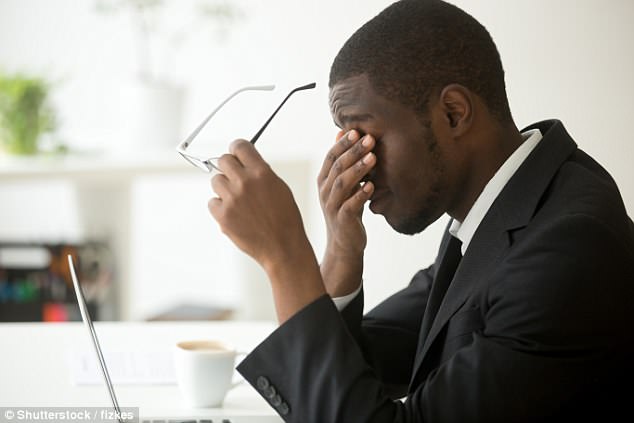 A small study by Brigham and Women’s Hospital found most people do not notice the effects of under-sleeping, and even report feeling alert, but they struggle to perform simple tasks

‘If somebody is routinely awake for more than 18 hours daily, then they are also routinely sleeping for less than six hours daily,’ said senior author Doctor Elizabeth Klerman, from the hospital’s Division of Sleep and Circadian Disorders.

‘Therefore, it was unknown whether any decline in vigilance or other functions was due to the extended wakefulness or restricted sleep.

‘We found that chronic short sleep duration, even without extended wakefulness, resulted in vigilant performance impairments.’

By placing nine healthy participants on a 20-hour ‘day’ during a 32-day inpatient protocol, researchers were able to separate the impact of chronic short sleep from any extended wakefulness.

The participants were restricted to 4.67 hours of sleep and 15.33 hours of wakefulness for each 20-hour ‘day’.

The researchers said that corresponds to around five-and-a-half hours of sleep in a 24-hour day.

Eight healthy ‘controls’ were allowed to sleep six hours 40 minutes and have 13 hours 20 minutes of wakefulness per 20-hour ‘day’, the equivalent of sleeping eight hours in a 24-hour day.

The findings, published in the journal PNAS, showed that participants with restricted sleep had a five-fold increase in attention lapses and doubled neuro-behavioural reaction time compared to the controls, yet there was no relationship between an individual’s self-reported alertness or sleepiness and their vigilant performance.

The researchers said this means that even though people were impaired as a result of chronic sleep restriction, they didn’t notice these impairments.

And participants on the restricted sleep schedule also did worse in the cognitive tasks over the 32-day protocol, suggesting that people are not able to adapt to chronically restricted sleep.

Dr Klerman said: ‘We have shown that sleep in itself is important.

‘People cannot learn to live on insufficient sleep and they may not be aware of their reduced cognitive abilities.

More so, our study suggests the importance of longer episodes of sleep, rather than a ‘split sleep’ schedule, though further evidence would be needed to test this directly.’