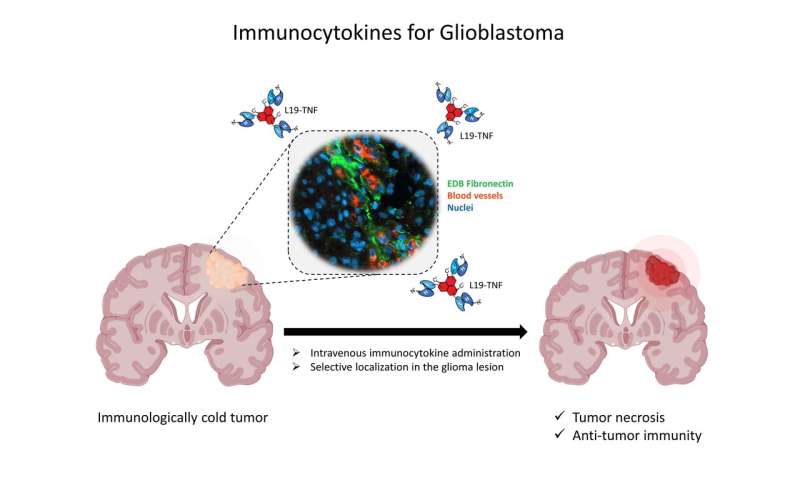 A team of researchers from University Hospital Zurich and the University of Zurich, the Swiss Federal Institute of Technology and biotechnology company Philochem, has found fusing cytokines with antibodies to be an effective treatment for glioblastoma in mice. In their paper published in the journal Science Translational Medicine, the group describes their technique and how well it worked when tested with mouse models.

Glioblastoma is a type of cancerous brain tumor that is notoriously difficult to treat. Surgery to remove it is difficult and fraught with side effects, and drugs have little impact. In recent years, researchers have tried using drugs that alert the immune system to the presence of the tumor but they have not worked as hoped, either. In this new effort, the researchers tried another approach—fusing cytokines with antibodies as a way to attack the tumor. The hope was that together, the two would incite the immune system to attack the tumor more strongly and hopefully get rid of it.

Cytokines are small protein cells secreted by the immune system. Their usual job is to send signals to other cells in the immune system. And antibodies are Y-shaped proteins produced by plasma cells, the workhorses of the immune system that attack viruses and bacteria. In this new effort, the researchers fused L19 antibodies to cytokines. L19 was chosen because prior research has shown that it is able to seek out markers for glioblastoma. Fusing the two proteins together proved to be a more formidable therapeutic approach than using either alone. The resulting (L19TNF) immunocytokines were injected into mice with induced glioblastoma and were then monitored to determine their impact on the brain tumors.