First responders told to wear MASKS, goggles, gloves if they come across fentanyl

Police and paramedics told to wear MASKS, goggles and gloves if they come across fentanyl after a 30% surge in deaths from opioid that’s 50 times stronger than heroin

Emergency responders have been told to wear masks, goggles and gloves if they come across fentanyl amid a spike in deaths from the drug.

Public Health England has issued guidance for paramedics, firefighters and police officers who may come across the opioid painkiller.

Deaths from the drug, around 50 times stronger than heroin, rose by almost 30 per cent last year in England and Wales.

The drug often comes in the form of pills and tablets but can also be taken as a powder, lollipops and solutions that can be injected.

Fentanyl is often imported illegally from Chinese labs and sold on the dark web at cut prices. Even a tiny amount of the drug – if inhaled – can prove fatal. 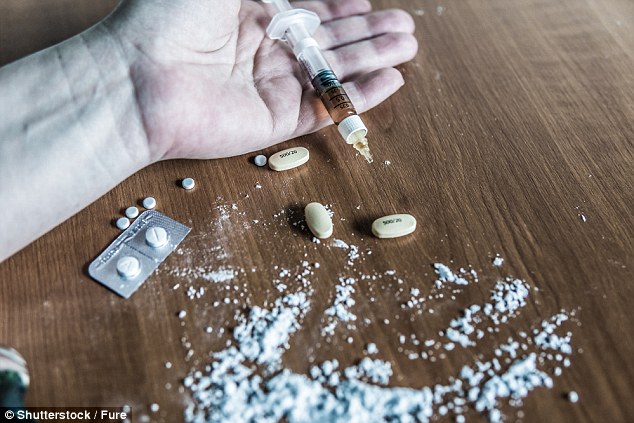 Public Health England has issued guidance for paramedics, firefighters and police officers amid a spike in deaths from the opioid painkiller (stock)

The new PHE guidance states personal protective equipment, such as masks, can protect against potentially fatal exposure to the drug.

First responders should also ‘avoid actions that could cause powder to become airborne’, but it did not specify any further as to what they may be.

Skin contact with fentanyl is unlikely to lead to harmful effects – especially if the skin is washed promptly with water, officials said.

The Government body added that inhaling the airborne powder is the route ‘most likely to lead to harmful effects’ – backing their calls to wear masks.

HOW MANY PEOPLE HAVE DIED FROM FENTANYL IN ENGLAND AND WALES SINCE 1993?

What is fentanyl and why is it so dangerous?

Fentanyl was originally developed in Belgium in the 1950s to aid cancer patients with their pain management. Given its extreme potency it has become popular amongst recreational drug users.

Between late 2013 and early 2015, more than 700 deaths were attributed to fentanyl and related substances in Australia. Drug overdoses killed more than 72,000 people in the US in 2017 – a record driven by fentanyl. While around 300 fentanyl deaths have been recorded in England and Wales since 1993.

It is often added to heroin because it creates the same high as the drug, with the effects biologically identical. But it can be up to 50 times more potent than heroin, according to officials in the US.

In America, fentanyl is classified as a schedule II drug – indicating it has a strong potential to be abused and can create psychological and physical dependence.

First responders may encounter fentanyl at ambulance calls for an overdose, traffic stops, arrests and even random searches.

PHE announced that their guidance, published last week, was adapted from similar recommendations currently adopted in the US.

Fentanyl, originally developed in Belgium in the 1950s to aid cancer patients with their pain, is partly behind the opioid crisis in the states.

Drug overdoses killed more than 72,000 people in the US last year, figures show two weeks ago – a new record driven by fentanyl.

Celebrated musician Prince died of an accidental fentanyl overdose at his Paisley Park home in Minnesota two years ago.

But fentanyl deaths have also spiked in England and Wales in recent years, with the 75 deaths from the drug in 2017 being a record high.

Carfentanyl, often used as an elephant tranquilliser because of its strength, was mentioned in death certificates in 2017 for the first time.

In comparison, just 58 people died from misuse of the drug the previous year, according to figures from the Office for National Statistics.

Just this week, an investigation revealed drug users can buy fentanyl and other lethal drugs through Chinese eBay-style websites cheaply.

Analysis handed to The Guardian showed Weiku.com, one of China’s largest e-commerce sites, hosts sellers willing to ship opioids to the UK.