E-cigarettes raise the risk of mouth cancer by damaging DNA

Millions have taken up e-cigarettes in recent years, with many former smokers as well as non-smoking teenagers choosing devices like Juuls because they are supposedly safer – and certainly more discreet – than cigarettes.

But as scientists scramble to study the trendy devices, they are discovering more reasons that they should be approached with caution.

The latest findings of a small study from the University of Minnesota suggest that vaping may raise levels of DNA-damaging chemicals like formaldehyde in the saliva, exposures that can put users at greater risk of oral and throat cancer. 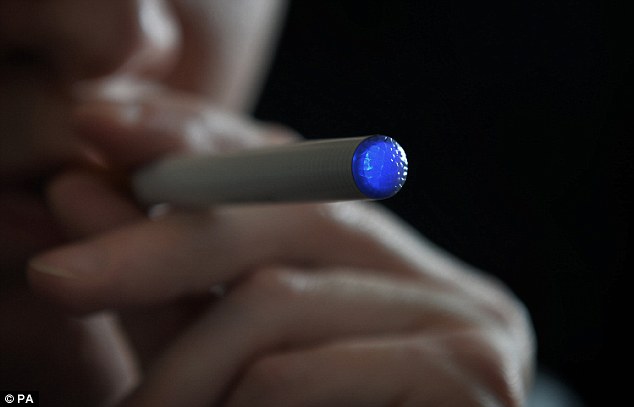 For decades now, we’ve known beyond a shadow of a doubt that cigarette smoke causes cancer.

Even cigarette companies now openly acknowledge that their blockbuster products – combustible cigarettes – are dangerous, and are now pushing e-cigarettes instead.

It’s working: the devices are now in the hands of more than nine million adults and 16 percent of American high school seniors report using them.

Teenagers are toting USB-looking Juul e-cigarettes to class, as the devices have become the new ‘cool’ thing to do, despite concerns over how addictive they may be.

Scientific study certainly moves faster than it did 50 years ago, but that still isn’t nearly as fast as a trend moves.

The first reports that smoke might be harmful to health came in 1602, when an anonymous doctor wrote an essay noting that smoking seemed be followed by illnesses like those that killed chimney sweepers.

Yet the danger of cigarettes wasn’t publicized until 1964, when the US Surgeon General announced the findings of a major report on smoking to 200 reporters.

Some of the earliest research on the latest nicotine delivery device has suggested that e-cigarette use may have the same constricting effect on blood vessels that combustible tobacco does.

That finding was complicated by the fact that the vast majority of those who vaped were still smoking, too.

While it consisted of just five subjects, the new University of Minnesota study, however, uncovered evidence that e-cigarettes alone may be dangerous, too.

WHAT PARENTS NEED TO KNOW ABOUT E-CIGARETTES

E-cigarettes use a mixture of flavored liquids and nicotine to create a vapor.

This vapor is then inhaled by the user similarly to how one would smoke a regular cigarette.

Are these devices safe?

Since these devices don’t use traditional smoke, people are under the assumption that they are safe for you.

But the liquid in the e-cigarettes can contain harmful toxins and carcinogens including anti-freeze.

The nicotine in the e-cigarettes also had addictive components and can lead to other tobacco use. This can hinder brain development in teens.

Also, the devices can overheat and explode if defective.

The Food and Drug Administration does not certify e-cigarettes as a product to get over smoking regular cigarettes.

First they had the study participants spend 15 minutes vaping, though it is unclear what specific devices or dosages they used.

Then, they swabbed their cheeks and tested the saliva for a host of chemical traces.

In the immediate aftermath of vaping, levels of three chemicals surged in the participants’ mouths.

Their saliva was positive for formaldehyde, acrolein and methylglyoxal. All three of these chemicals are known to find their way into cells and damage DNA.

Sure enough, when the scientists looked for signs of that DNA damage, they found them in the vaping participants.

They used the same mass spectrometer technology that had previously revealed DNA changes linked to alcohol in another study to analyze cells taken from the e-cigarette users’ mouths.

Acrolein, in particular, had done notable damage to four out of five of the vapers’ oral cells.

The scientists found DNA adducts, DNA-modifications that signal early genetic changes that can lead to the development of cancer down the line.

Adduct alterations are not a guarantee of cancer These cells can start repairing themselves in ways that will avert the risks of tumors. But if they don’t make these fixes, oral cancer is a very real risk.

Acrolein is one of the toxins in cigarette smoke, but is not primary suspect in most smoking-related cancers.

But the DNA changes that the new study revealed suggest it may lead to oral cancers for vapers.

About 50,000 people are diagnosed with cancers of the moth and throat every year, killing roughly 20 percent of those with the disease.

This comes out to about one person dying every your, 24 hours a day, according to the Oral Cancer Foundation.

For the University of Minnesota scientists, the new discovery is also a harbinger of how different the health effects of vaping and smoking may be, and just how little we know.