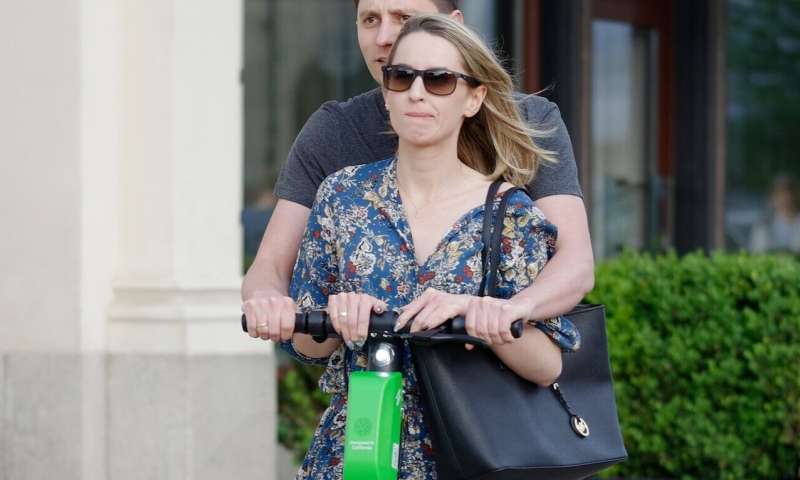 A significant proportion of e-Scooter injuries in the US seem to be occurring while ‘drivers’ are under the influence of drugs and/or alcohol and almost never wearing a helmet, suggests a study of admissions to three US major trauma centres, published online in Trauma Surgery & Acute Care Open.

Most of those injured are men aged 20 to 40, the findings indicate.

Motorised stand up or kick scooters date back to 1915. But electronic or e-Scooters have only recently gained mass appeal and come into widespread use since 2017.

Promoted as a cheap, eco friendly means of transport, e-Scooters combine the size of a child’s push scooter with the speed and power of an electronic bicycle.

Although partially or completely banned in some US cities, they are nevertheless widely available to rent all over the US, and in many other regions of the world, including Europe.

They are currently banned from use on public roads in the UK, but the Department of Transport is currently reviewing the law.

Given their soaring popularity in the US, the researchers wanted to look at the patterns of injury associated with their use, and other potentially influential factors, such as the wearing of helmets and drug and alcohol use.

They drew on the numbers of patients admitted to three Level 1 (major) trauma centres between September 2017 and October 2018.

During this period, 103 people were admitted with e-Scooter injuries, with monthly admissions rising sharply from August 2018 onwards, to reach 43 by October 2018 alone.

More than four out of 10 (42%) were moderately to severely injured, as measured by the Median Injury Severity Score. One person was critically injured.

The bulk of the injuries (42%) involved fractures to the leg bones (tibia and fibula); the bony protrusions at the ankle (malleoli); the collar bone (clavicle); shoulder blades (scapula); and the forearm bone (ulna). Half the patients (53%) with these injuries required surgery.

Facial fractures were the next most common type of injury: 27 (26%) patients had these, most of which were mild, but required surgery in six (22%) cases.

Nearly one in five (18%) patients had a bleed on the brain, although none required surgery, and a further 17 people were concussed.

Five other serious injuries included haemothorax (blood in the space between the lungs and the chest wall); tears in the spleen; kidney injury; and neck injury (cervical spine).

In all, one in three people required surgery. And while most (86%) were discharged home, six patients required long term nursing care/rehabilitation, and two needed care at home.

Information on helmet use was missing for five patients, but of the remainder, virtually none was wearing one at the time of the incident (98%).

Drug and alcohol use was common. Most patients (79%) were tested for alcohol, and around half (48%) were well above the legal limit. Sixty per cent were also screened for drugs, and half (52%) tested positive.

The most common substances found were tetrahydrocannabinol (THC), one of the active ingredients in cannabis (32%), followed by methamphetamine and amphetamines (18%).

The researchers suggest that e-Scooters may be particularly attractive to risk takers. “Studies in China have found that e-Scooter riders are also more likely to exhibit risky driving such as riding in traffic lanes and driving against traffic compared with bicycle and electronic bicycle riders.

“Our current study also supports this hypothesis, consisting primarily of men aged 20 to 40 years with a high rate of alcohol use, drug use, and lack of helmet use,” they write.

This is an observational study, and as such, can’t establish cause. The total number of patients was small and the researchers weren’t able to glean information on the frequency, locations, or patterns of e-Scooter use.

What’s more, the research focused on patients admitted to major trauma centres, and there may be a large number of people who sustain more minor injuries after riding an e-Scooter.