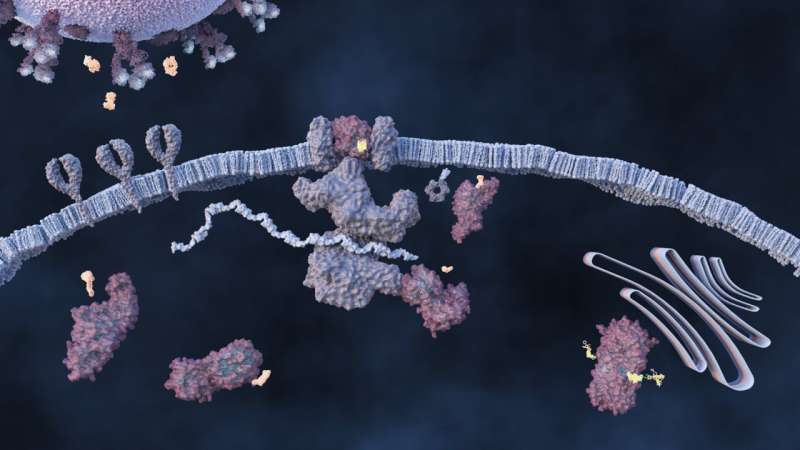 In early 2020, when the novel coronavirus was gaining momentum but had not yet been named a pandemic, computational chemist Marti Head of Oak Ridge National Laboratory—along with scientists and researchers around the globe—abruptly switched her focus to the fight against COVID-19.

The world was struggling to understand this new virus known as severe acute respiratory syndrome coronavirus 2, or SARS-CoV-2. But Head and others already knew that defeating such a highly transmissible pathogen was going to require a multi-pronged approach, including vaccines and multiple drug therapies.

After viable COVID-19 vaccines became available for emergency use by the U.S. Food and Drug Administration—a feat achieved in record time—mainstream talk of therapeutics dropped off.

Yet, effective drug treatments still needed to be in the mix.

“There’s been so much focus on vaccines that development of antibodies and antiviral drugs kind of get overlooked,” she had said in February 2021. “We absolutely, positively need vaccines … (to) help give us that kind of herd immunity to protect the widest population that we can. But we also need other tools.”

Development of drug treatments is complex, and it often takes years, even decades, to move from scientific discovery all the way through the process to an approved, publicly available therapeutic. As the spread of COVID was ramping up in 2020, the Department of Energy launched the National Virtual Biotechnology Laboratory, or NVBL, program with funding from the U.S. government’s CARES Act and began shoring up teams from across DOE’s national laboratory system.

The tasks at hand required two things: creativity and speed. And, the DOE labs are delivering.

Molecular Design for Medical Therapeutics is one of the NVBL program’s teams. Led by Head, the group leverages deep knowledge and expert skills in artificial intelligence and computational screening techniques used for early stage biomedical research. In the past, team scientists have, among other projects, studied targets for more effective antibiotics and treatments for cancer.

As many national lab scientists turned their talent, tools and attention from saving energy to saving lives, they gained a new level of expertise, resulting in the development of innovative research processes likely to have longer term impacts as they shift back to their energy-funded missions.

Head joined ORNL in February 2018 from GlaxoSmithKline initially to lead the lab’s Joint Institute for Biological Sciences, a collaboration with the University of Tennessee. She spent about two years developing strategies to fund biological research that would leverage the lab’s powerful and innovative DOE-funded user facilities, such as the Oak Ridge Leadership Computing Facility, Spallation Neutron Source and High Flux Isotope Reactor, and the Center for Nanophase Materials Sciences, and managing ORNL’s participation in the multi-national lab consortium called Accelerating Therapeutics for Opportunities in Medicine, or ATOM.

When the nation sounded the alarm on COVID-19, she drew upon her decades of pharmaceutical research and drug development experience in computer-aided drug discovery to help DOE pull together a dream team of molecular biophysicists, computational biologists, chemists and others.

“(DOE) at that time … really wanted to focus on computation,” Head said. Computation—especially when it involves ORNL’s Summit, the nation’s most powerful supercomputer—afforded the molecular design team an incredible jumpstart in tackling an enormous coronavirus challenge. Other ORNL-led teams were quickly revealing the potential of existing antiviral drug compounds and characterizing the impact the virus was having on human cells, managing massive amounts of data in a matter of hours.

Still other ORNL scientists were further discovering the nature of the novel coronavirus using crystallography experiments with X-rays and neutrons.

Generally, SARS-CoV-2 spreads through airborne droplets from an infected person. Inside the body, the virus can quickly wreak havoc, invading healthy cells in myriad ways, making copies of itself and triggering a variety of biological responses ranging from undetectable to mild to deadly. The United States has reported hundreds of thousands of COVID-19-related deaths and millions have perished from this disease worldwide.

“As we’ve seen, the virus is mutating. That’s the nature of viruses, especially out in the real world in patients,” Head said. “(Viruses are) continually mutating and the mutations that allow them to be more viable, grow in importance in the world.”

“Tackling a virus requires a multi-pronged approach, both in the bigger picture of having this arsenal to respond as the virus changes over time and also by recognizing that trying to kill something that’s not really alive is a very hard task,” she added.

The molecular design team took shape, bringing together experimental validation with computation. Within months, they offered five promising drug therapy approaches, each focusing on a unique aspect of the virus’s lifecycle.

One promising therapy targets the spike protein, one of the earliest and most studied points of attack against the novel coronavirus. The spikes, which protrude from the virus’s outer layer, form a corona, giving the virus its name. The virus invades the cell when the spike protein binds to the human ACE2 receptor. The molecular design team used computationally designed antibodies to block the spike protein from binding to cells.

If the virus binds and then enters the cell, it can mature using two proteins—the main protease and the papain-like protease—necessary for viral replication. One possible drug therapy would block this activity to keep the virus from maturing.

ORNL scientists contributed to this potential solution with computational data and experimentation. They also contributed to the design, synthesis and testing specific to the papain-like protease, a lesser studied but highly promising approach. The team also characterized the main protease through world-class crystallography and X-ray and neutron experiments by ORNL’s neutron scientists, plus performed inhibitor synthesis experiments at ORNL’s CNMS.

After entering the cell, maturing and replicating, the virus begins to spread throughout the body. The team is researching small molecules with the potential to become drugs that inhibit viral spread. Their results have been shared with experimentalists including Colleen Jonsson at the University of Tennessee Health Science Center and at the University of Chicago, which both have controlled biocontainment labs to test the small molecules on live virus.

In the final viral replication step, new spike proteins wrap around viral RNA to make new virus copies. To inhibit this process, the team is investigating ways to prevent the new virus from escaping infected cells.

Each approach, according to Head, is designed to interrupt a specific interaction between the SARS-CoV-2 virus and human cells. To achieve maximum benefit in treating COVID-19, drug developers will likely pursue a combination therapy to attack the virus on multiple fronts and reduce viral load.

Of mice and medication

The journey from scientific discovery to an approved, marketable drug is long and never guaranteed. But the promising early results from the DOE NVBL molecular design team warrant the next step: a small mouse study.

“DOE, of course, is not in the business of developing drugs,” said Head. “We’ll put the information in the public domain so that others can act on it broadly. And our technology transfer office will engage with potential partners across the landscape.”

As of spring 2021, the team had data on six compounds worth exploring further, assuming they could all be converted into a form appropriate for animal studies. From the six, the team will select one for a collaborator to test for bioavailability in a mouse infected with SARS-CoV-2.

The world began emerging from the COVID-19 pandemic in spring 2021 as well, as the vaccine became more widely available. But none of the molecular design team’s efforts were in vain. In fact, Head and her colleagues are finding ways to extend their research impact after funding through NVBL (which was meant as a short-term endeavor) comes to an end.