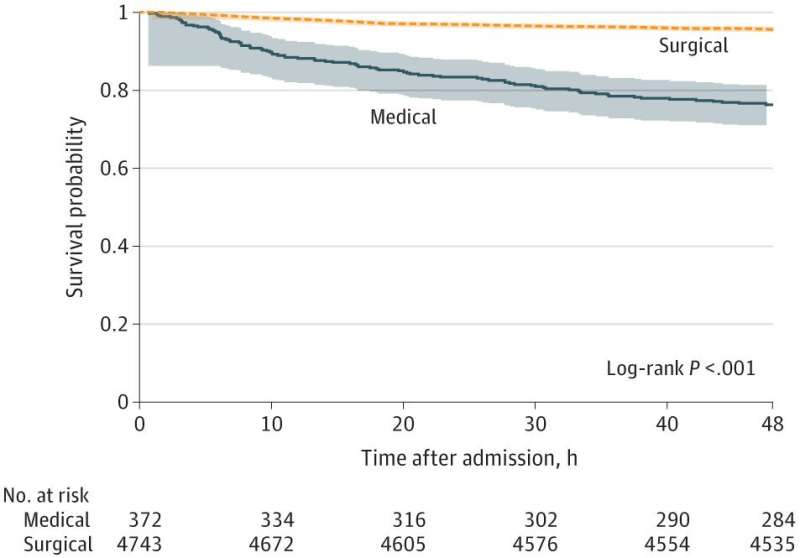 The chance of a patient living after tearing their aorta has improved significantly, but the condition remains deadly if not recognized early and repaired surgically, a study finds.

A team of researchers examined early mortality rates for over 5,600 patients admitted to the hospital and examined hourly with type A acute aortic dissection between 1996 and 2018 from the International Registry for Acute Aortic Dissection. The often-fatal dissection occurs when blood rushes through a tear in the ascending aorta, causing its layers to separate.

Findings published in JAMA Cardiology reveal that 5.8% of patients with type A acute aortic dissection died within the first two days after hospital arrival, a mortality rate of 0.12% per hour. The rate is significantly lower than that reported in the 1950s, which estimated that 37% of patients died within the first 48 hours, with an increasing mortality rate of 1-2% per hour.

“We believe that advances in diagnosis and management, especially a focus on early surgical repair, may have contributed in part to these improvements in mortality for acute aortic dissection,” said Kim Eagle, M.D., MACC, senior author of the paper and director of the University of Michigan Health Frankel Cardiovascular Center.

Of all the patients, 91% either received surgery or were intended for surgery, with the others managed medically due to advanced age and complications, such as stroke and kidney failure. Nearly 24% of those receiving medical treatment alone died within two days, compared to 4.4% of patients treated with surgical repair—a death rate more than five times higher.

“Patients who were managed medically were likely not surgical candidates due to their comorbidities,” said Bo Yang, M.D., a professor of cardiothoracic surgery at University of Michigan Medical School who was not involved in the study. “The medically managed patients could die from aortic dissection-associated complications—such as malperfusion, cardiac tamponade, aortic rupture and acute aortic insufficiency, which can be treated with surgery—or from their existing medical conditions which could be worsened by the aortic dissection.”

Only 1% of patients deemed OK for surgery died before the procedure. These patients died after an average of nearly nine hours from being admitted to the hospital, exceeding the six-hour median time to surgery for all patients.

Interhospital transfer is needed in more than 70% of aortic dissection cases, causing inherent delays. Before this study, Eagle says, it was thought that early death from this condition was so prohibitive that operating urgently, even in hospitals with limited volume of aortic dissection surgery and resources, was the preferred strategy.

However, there is evidence (published in The Annals of Thoracic Surgery) that surgery at a low-volume hospital can double the risk of dying while undergoing repair compared to the highest volume providers. Additionally, mortality rates for open repair of acute type A aortic dissection are nearly three times higher when the operation is not performed by a dedicated aortic surgeon, according to work published in Seminars in Thoracic and Cardiovascular Surgery.

“Hospital mortality at a high-volume center like U-M, where aortic dissection patients are taken care only by highly experienced aortic surgeons, can be as low as 5%, while the same patient operated on at a low-volume center may be 20% or higher,” Eagle said. “With this new information, it is clear that the ‘cost’, or risk, of a four-to-six-hour delay caused by transfers is more than offset by the lower risk of surgery at experienced hospitals.”

Cases are rare. Approximately three in 100,000 people suffer aortic dissection each year. The condition most commonly affects older men, and a person experiencing the tear may feel a “knifelike, tearing pain through the back,” according to IRAD.

It’s estimated in work published in Circulation that up to 50% of patients will die before ever reaching the hospital, making the overall mortality for aortic dissection substantially higher.