Grim footage shows an audiologist removing part of a cotton bud from a man’s ear – after it had been wedged there for two years.

Neel Raithatha, who runs a clinic in Leicestershire, explained the unnamed patient was in agony before the bud was eventually removed.

The man, who admitted it became stuck in his right ear canal in 2016 – but thought it fell out on its own, also reported limited hearing. 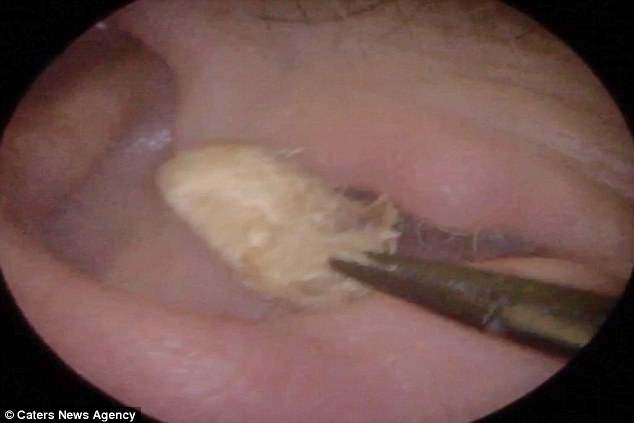 Neel Raithatha, who runs a clinic in Leicestershire, explained the unnamed patient was in agony before the small bud was eventually removed

Mr Raithatha, owner of the Hear Clinic in Oadby, performed a ‘delicate procedure’ to extract the small part of the bud – believed to be the tip. It is unsure how it broke away.

Speaking about the clip, which he uploaded to his popular YouTube channel, he said: ‘The client reported muffled hearing in the right ear.

‘Fortunately, the eardrum was healthy and intact and it took around a minute to remove.

‘It was a delicate procedure given the cotton bud was pushed right up against the eardrum.

‘I had to ensure I did not exert any force whilst removing as I could have easily have perforated the eardrum in doing so.’

The man presented to Mr Raithatha after he became concerned over an unusual amount of pain inside his ear when he went swimming. 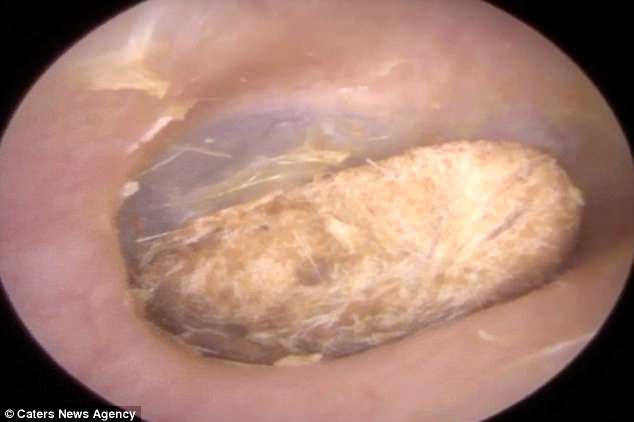 The man, who admitted it became stuck in his right ear canal in 2016 – but thought it fell out on its own, also reported limited hearing

WHY SHOULDN’T YOU USE COTTON BUDS?

The new case comes after health officials declared in November that cotton buds should not be used to clean ears.

Inserting a bud could damage the ear and push wax further down, according to the National Institute for Health and Care Excellence.

The draft guidance also said ear syringing, in which a metal syringe is used to pump water manually into the ear to clear out wax, is potentially harmful.

Committee members agreed that buds may be a ‘hazard’ that can cause infections or push wax further into the ear canal.

The guideline said the ear canal is ‘self-cleaning’, with excess wax falling out on its own, and that the entrance to the ears can be cleaned with a damp flannel.

This is not the first time that the self-proclaimed ‘wax whisperer’ has had to remove an unusual object from people’s ears.

MailOnline has reported on previous clips of his that have shown him extracting a pen cap and even an earring with his forceps.

Mr Raithatha has shot to fame in recent months, as his toe-curling videos of him extracting wax from people’s ears have gone viral.

He has nearly 60,000 subscribers on YouTube, where he regularly uploads his clips.

Mr Raithatha has amassed more than 45 million views on YouTube since he began to upload his disgusting videos in 2013.

It comes after he released disgusting footage of him removing the ‘worst case’ of earwax that he has ever come across in March.

Mr Raithatha spent 10 minutes trying to chisel a huge block of the yellow substance from a patient’s ear.

The procedure normally takes less than half that time, but it was made so difficult because the wax was so deeply stuck it could not be sucked out.

Instead, he had to use an ear hook to scrape at the gooey substance and drag it out in chunks.