When you eat makes all the difference: Circadian rhythms keep our meal schedules in sync

When you eat – not what you eat – makes all the difference: Circadian rhythms keep our meal schedules in sync and our weights in check, study suggests

A form of intermittent fasting could improve the health in those of us with disrupted internal body clocks, a new study has found.

The concept, known as ‘time-restricted feeding’, involves reducing the hours between the first and last calorie eaten each day.

Researchers say that limiting these times in mice whose bodies could not properly regulate their sleeping and waking patterns helped correct obesity and other metabolic health issues, even when eating an unhealthy diet.

Previous studies have suggested that daily (circadian) rhythm has a direct impact on sustaining a healthy metabolism.

But the team, from the Salk Institute for Biological Studies in La Jolla, California, says its findings are the first to show that circadian clocks help produce daily eating patterns and that metabolic diseases are ‘only a consequence of disrupted eating behavior’. 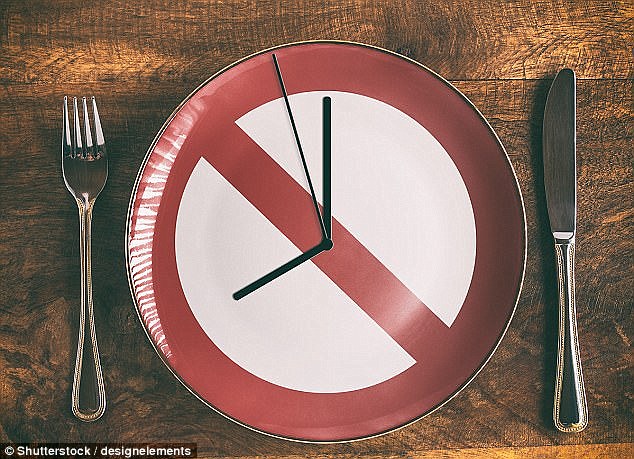 Researchers say that limiting times when mice without normal clocks ate helped correct obesity and other metabolic health issues, even when eating an unhealthy diet

Our circadian clocks are linked to the light–dark cycle, or how many hours of day and night there are.

They allow us to anticipate and prepare for precise and regular environmental changes such as when to eat and sleep.

Found throughout the nervous system and peripheral organs, these ‘clock genes’ even play a role in DNA repair, fertility and the effectiveness of medications.

If your body doesn’t receive these signals, however, your circadian rhythm can be completely thrown off.

People with routine disruptions of their circadian rhythms have been shown to have a shorter lifespan and be more prone to cancer, as well as suffer from various sleep disorders such as insomnia.

Night owls, for example, keep lights during the evening, therefore disrupting the signals that tell them it’s time to go to sleep.

Previous studies have shown that mice with normal circadian clocks have regular eating patterns, meaning they eat only at certain times.

However, mice with defective clocks have irregular eating patterns and eventually show signs of metabolic diseases, even with healthy diets.

‘This earlier research led to the theory that that a robustly cycling circadian clock function is necessary to prevent metabolic diseases,’ said senior author Dr Satchidananda Panda, a professor in the Regulatory Biology Laboratory at the Salk Institute.

‘With this new research, our question was: “If the mice don’t have an internal clock telling when to eat, can we externally instruct mice when to eat, and will it prevent metabolic diseases?”‘

WHAT ARE CIRCADIAN RHYTHMS?

Circadian rhythms are physical, mental and behavioral changes that follow a 24-hour cycle.

They respond primarily to light and darkness in an organism’s environment.

They are found in most living things, including animals, plants and many tiny microbes.

Circadian rhythms are driven by our biological clocks.

They are produced by natural factors within the body, but are also affected by signals from the environment.

Light is the main cue influencing circadian rhythms, turning genes on or off that control an organism’s internal clocks.

When there is less light, the brain makes more melatonin to make you drowsy but more light means you are more awake.

They have been linked to various sleep disorders, such as insomnia.

For the study, the team used three different mice strains that had disrupted circadian clocks.

Researchers gave some of the mice food whenever they wanted it while the other mice were only able to eat between a nine- and 10-hour window – but both groups ate the same amount of calories.

Both groups were then put through a number of tests, including stamina on a treadmill and levels of cholesterol and glucose.

The mice that were fed the food whenever they wanted it developed metabolic diseases such as obesity; hyperlipidemia, a condition when there are high levels of fat proteins in the blood; and high glucose levels.

But the mice who were fed during the time-restricted window did not develop such diseases and were described as ‘lean and fit’.

‘This was an unexpected finding,’ said Dr Panda.

‘In the past, we have assumed that the circadian clock had a direct impact on maintaining a healthy metabolism, but this puts water on that fire.

‘Our research suggests that the primary role of the clock is to produce daily eating-fasting rhythms, and that metabolic disease is only a consequence of disrupted eating behavior.’

For future research, the team wants to see if our clocks have an effect on our central nervous system and apply the findings from the new study to human subjects.

‘We know that as people get older, they can start to lose their clocks,’ Dr Panda said. These findings may suggest new ways to control compulsive eating in people whose clocks are disrupted.’

The findings bear resemblance to research on other types of intermittent fasting, much of which is still in its early stages.

However, studies have found several health benefits including low levels of insulin, believed to increase fat burning; cellular repair, which removes waste from cells; and an increase in human growth hormone, which helps in muscle gains.

Many people choose to fast to lose weight, and are successful in doing so, but some scientists believe in the decrease in insulin and increase hormones help you burn body fat and raise your metabolic rate.