Everything has a price.

And when it comes to cheap cosmetic surgery done overseas, it’s the taxpayer that ends up footing the million-pound bill.

Thousands of Britons flock to destinations like Turkey every year for bargain tummy tucks, boob jobs, and butt lifts, driven by a desire to look as thin and sexy as their favourite celebrities or reality TV stars.

While many return with a few extra quid in their pocket having saved thousands by opting to go under the knife abroad, some end up having to pay up to £30,000 for surgical corrections.

In the most serious cases where urgent care is needed, the NHS — already short on valuable resources — ends up footing the bill.

Removing dead tissue from improperly cleaned wounds, correcting poor stitching and even taking out surgical objects like latex gloves that were left inside patients’ bodies are just some of the issues British surgeons have had to correct within the past decade.

Both the NHS and British cosmetic surgeons are growing increasingly concerned that the health service is being used to subsidise the poor follow-up care of cheap surgery offered overseas.

The NHS itself does not record the number of corrective procedures it performs on Britons who had surgery overseas each year. 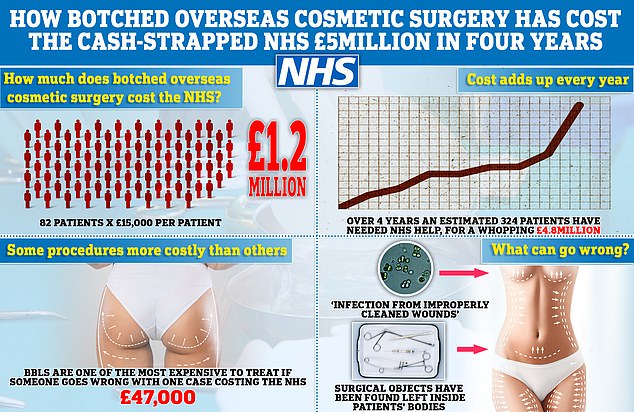 British surgeons are growing concerned that the NHS is helping subsidise poor care overseas, with the bill costing the taxpayer an estimated £4.8million over the last four years

But an audit of the British Association of Aesthetic Plastic Surgeons (BAAPS), which has many members in the health service, revealed that 82 patients needed follow-up NHS care after getting surgery overseas in 2021.

This was a 44 per cent rise on the previous year — but this may be a blip due to the Covid travel restrictions imposed in 2020.

The real number of patients is likely to be in the hundreds, as some patients will be treated by non-BAAPS members.

BAAPS estimate the cost to the NHS for these corrective procedures per patient was about £15,000, covering aspects of the procedure like staff time and drugs like anaesthesia.

This puts the 2021 bill for corrective treatment done on the cash-strapped NHS at about £1.2million, campaigners estimate.

In total, BAAPS members have seen 324 patients requiring surgery after returning to the UK in the past four years, costing the NHS a colossal £4.8m.

But some cosmetic procedures can cost far more than £15,000 to fix, one being the notorious Brazilian Butt Lift (BBL).

A BBL is where fat taken from elsewhere in the body is injected into the buttocks to give them a larger, curvier form, emulating the pronounced posteriors of Kim Kardashian and the rapper Cardi B.

BBLs are infamous as one of the most dangerous types of cosmetic surgery, having a mortality rate far greater than other procedures due to the danger of the injected fat entering the bloodstream and causing a potentially deadly blockage.

BAAPS previously reported one incident in 2018 where a patient who had a BBL overseas got a flesh-eating bacterial infection that cost the NHS an estimated £47,000 to treat.

The organisation’s president, Dr Mary O’Brien, said victims of poor surgery done abroad often had little chance of getting problems fixed overseas, and hence had to rely on the NHS or pay privately.

‘The surgeons involved in these schemes do not have a work permit nor are registered in the UK, and it is unlikely there will be any possibility of seeking revisional surgery.’

She also told MailOnline that the very nature of how surgery is conducted in popular cosmetic procedure hotspots like Turkey meant surgical complications were more likely.

This is because patients go through less vigorous vetting processes for the surgery and patients are not followed up as extensively. For example, patients in the UK may be turned away due to concerns over their mental state.

‘Complications and poor outcomes are more likely to occur in patients who are poorly selected both physically and psychologically,’ she said.

‘Careful follow-up is necessary after a surgical procedure so that any minor complications that may occur can be dealt with early before they progress to a much more serious situation.’

Dr O’Brien said infections were just one example of these complications that could be nipped in the bud by an attentive surgeon.

‘If diagnosed and treated early, very serious and sometimes life-threatening infections can be avoided,’ she said.

‘This is just one type of complication that UK surgeons have had to deal with which has huge costs physically and psychologically to the patient as well as financially to the NHS.’

She added another key danger area is patients being put on planes back home far too soon after surgery, which can put them at risk of dangerous blood clots.

Blood clots are a risk after any major surgery but this aggravated by flying because people sit for long periods of time and become dehydrated due to the recirculated air in the aircraft.

Overall, Dr O’Brien said getting ‘cheap’ cosmetic surgery overseas can end up costing far more you far more than you save.

‘There is a lack of transparency about the surgical training, type of facility, care pathways and insurance arrangements if patients choose to have surgery abroad. Safeguards are lacking’ she said.

‘It is a combination of multiple factors that contribute to the devastating consequences that some patients and their families may find themselves with as a result of pursuing the lure of “cheap” surgery abroad.

‘Sadly, it often proves to be more costly and not just in the financial sense.’