Are the 5000-year-old traditions of yoga, which use the body as a vehicle for spiritual transformation, being trashed by competitive posing? And, as the practice rooted in spareness and discipline gets ever more tricked up and meme-ified, could we have finally hit peak yoga ridiculousness?

Gosh I love yoga, but  given how the practice is merchanised, touted and packaged it strikes me as ironic that what is meant to be a practice towards the dissolution of ego and transcending individualism and grandiosity attracts so many big egos. 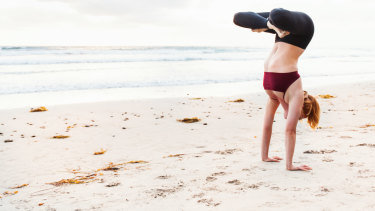 Peak yoga silliness? People are injuring themselves to post the perfect yoga pose.Credit:Getty

As stars of the western yoga industry compete like the influencers they have become for ever greater online followings, now we learn that in the pursuit of the perfect promotional shot more of them are sustaining injuries.

Instagrammable poses have seemingly become synonymous with a more advanced practice – whether or not the person doing them is “yogic” on the inside.

The Telegraph, London reported last week that a “leading British physiotherapist” had noticed a spike in patients who were inexperienced yoga teachers intent on getting a picture-perfect pose.

“Social media has definitely contributed to this feeling of having to take it to the next level and that’s purely for aesthetic reasons,” the physio said. “Just because you can get your head to touch the floor, you might manage to get an ego boost but it doesn’t necessarily mean you are going to have a huge health boost. You are just leaving yourself with more problems.”

A 2018 study by Central Queensland University found yoga-related injuries had increased by 80 per cent over a seven-year period (though it should be noted, compared with other physical activities, rates of yoga injuries are still relatively low).

"Influencers on social media are showcasing yoga based on the sex appeal of difficult poses, while wearing tight-fitting clothing and often in risky environments," lead author Dr Betul Sekendiz said.

"Due to this attention-grabbing promotion, we know that many people are attempting the same type of poses to upload to their own social media.”

In August, a 23-year-old Mexican woman broke 110 bones after she fell six floors after attempting an “extreme yoga pose”, hanging from her balcony, while her friend took a photo for social media.

I want people to come for how it makes them feel better … not just because they can get their head to their knee or whatever.

In March, an American Instagram yoga influencer, Rebecca Leigh spoke about the “terrifying” stroke she experienced in 2017 while performing a hollowback handstand for the benefit of her 26,000 followers.

“No pose or picture is worth what I have been going through. Don't be so tempted to push over your limits," she said.

Dana Diament is a yoga medicine therapist and teaches anatomy for Byron Bay’s Creature Yoga. She says many of the people competing to post the most difficult pose are missing the point of yoga.

“As much as it’s cliched … you’re meant to be using your body to set up this environment where you can learn about yourself rather than just trying to get into the pose,” she says, adding that many of the people who can do those poses without injuring themselves are naturally hypermobile or have “ligament laxity” issues.

“Aesthetics are definitely part of it … but is it just what we see on social media or a lack of education and anatomy training for many yoga teachers?”

I remember feeling unequipped after I did my 500 hours teacher training nearly 10 years ago and I had already been practising for a decade. I remember thinking if I felt that way, how must it be for teachers who are unleashed after just 200 hours, which is the more common training length.

There is a natural desire to fill the gap between your own lack of confidence as a new teacher and the image of a seasoned, zen yogi you want to portray. The easiest way to do that is to show off how capable you are of impersonating a pretzel.

There is also a tacit pressure to look the part.

“My own journey of one was one of trying to force myself into these poses so that I could take better-looking pictures, so that I could have a better Instagram following,” admits Diament, who has been teaching for seven years. “For me, it didn’t really work out that well. I did actually get injured. I had a hip injury that I dealt with for about three years and it changed the way that I practice.”

Some see them as art, but Diament doesn’t post many pictures of herself in yoga poses these days because she worries it sends the wrong message.

“I want people to come for how it makes them feel better … not just because they can get their head to their knee or whatever. And for teachers as well, there is this [feeling they] need to do more and be more and push every position,” she says. “I just think it’s sad that we are in this day and age where the number of followers you have means you get more bookings or sell more products.”

So have we hit peak yoga? I don’t think so, but I do think we’ve hit peak ridiculousness when it comes to the desire to portray ourselves as perfect.

My hunch is that this isn’t so much of a “yoga” problem as a broader problem many people face, reluctant to reveal our fallibility and flaws often to our own detriment and certainly to the detriment of feeling connected with ourselves and others (arguably the real point of yoga). After all, people are injuring themselves generally trying to get the perfect Instagram shot and I've heard of plenty of other fitness professionals snapping tendons and generally hurting themselves as they try to out-do one-another for social media.

From this problem,  no one – yoga teachers and yoga students included – is immune.