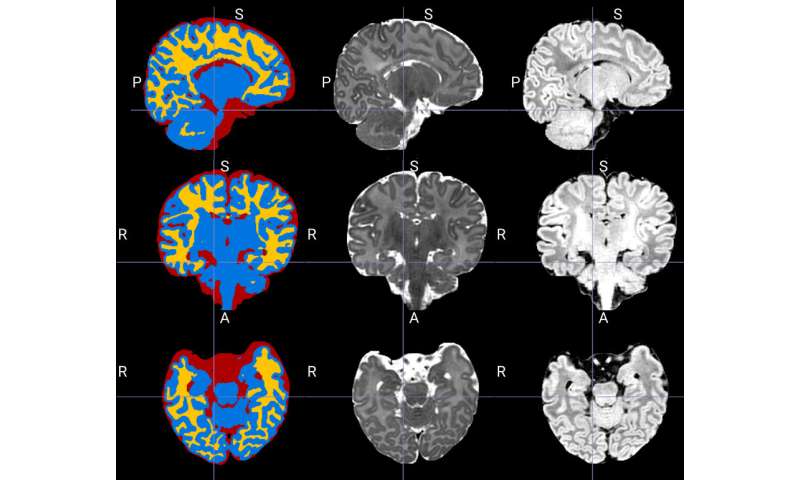 Canadian scientists have developed an innovative new technique that uses artificial intelligence to better define the different sections of the brain in newborns during a magnetic resonance imaging (MRI) exam.

The results of this study—a collaboration between researchers at Montreal’s CHU Sainte-Justine children’s hospital and the ÉTS engineering school—are published today in Frontiers in Neuroscience.

“This is one of the first times that artificial intelligence has been used to better define the different parts of a newborn’s brain on an MRI: namely the grey matter, white matter and cerebrospinal fluid,” said Dr. Gregory A. Lodygensky, a neonatologist at CHU Sainte-Justine and professor at Université de Montréal.

“Until today, the tools available were complex, often intermingled and difficult to access,” he added.

In collaboration with Professor Jose Dolz, an expert in medical image analysis and machine learning at ÉTS, the researchers were able to adapt the tools to the specificities of the neonatal setting and then validate them.

This new technique allows babies’ brains to be examined quickly, accurately and reliably. Scientists see it as a major asset for supporting research that not only addresses brain development in neonatal care, but also the effectiveness of neuroprotective strategies.

In evaluating a range of tools available in artificial intelligence, CHU Sainte-Justine researchers found that these tools had limitations, particularly with respect to pediatric research. Today’s neuroimaging analysis programs are primarily designed to work on “adult” MRIs. The cerebral immaturity of newborns, with an inversion of the contrasts between grey matter and white matter, complicates such analyses.

Inspired by Dolz’s most recent work, the researchers proposed an artificial neural network that learns how to efficiently combine information from several MRI sequences. This methodology made it possible to better define the different parts of the brain in the newborn automatically and to establish a new benchmark for this problem.

“We’ve decided not only to share the results of our study on open source, but also the computer code, so that brain researchers everywhere can take advantage of it, all of which benefits patients,” said Dolz.

CHU Sainte-Justine is one of the most important players in the Canadian Neonatal Brain Platform and also has one of the largest neonatal units in Canada specializing in neurodevelopment. As part of the platform, research teams are implementing projects like this one with the aim of improving the long-term health of those newborns who are most vulnerable to brain injury.

“In studies to assess the positive and negative impact of different therapies on the maturation of babies’ brains, we need to have the ability to quantify brain structures with certainty and reliability,” Lodygensky said. “By offering the scientific community the fruits of all our discoveries, we are helping them, while generating an extraordinary benefit for at-risk newborns.”