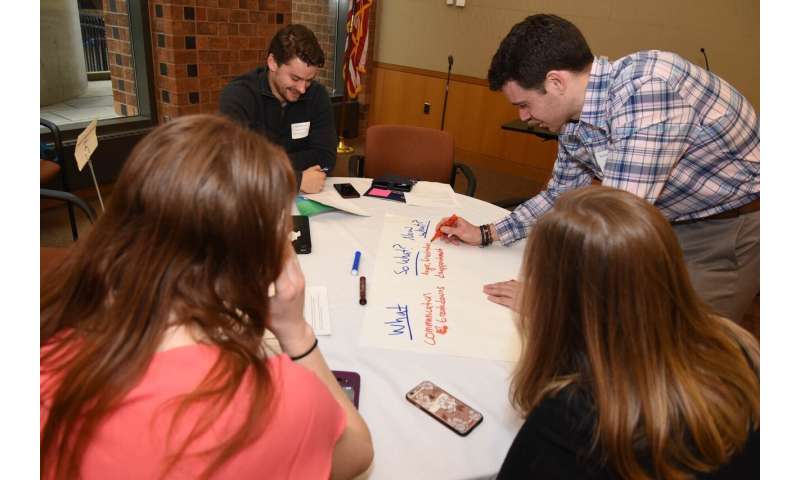 In 2014, Jefferson launched a pilot curriculum to build interdisciplinary teams to reach out to high-need patients and attempt to find low-cost, high-touch ways to reduce their recurrent difficulties. The results of the Jefferson-based pilot appear Dec. 10 in a new publication of the New England Journal of Medicine, NEJM Catalyst Innovations in Care Delivery.

“We need healthcare teams that appreciate the diversity of our patients and understand how socioeconomic factors affect health outcomes,” Dr. Collins said. “No one discipline can do this. We must develop collaborative teams among our students.”

People with high needs and high use are the 5 percent of patients who account for 50 percent of the cost of America’s healthcare, Dr. Klasko said. “It takes a new curriculum for all health professions to look beyond our specialties and integrate mental health as well as economic and social challenges in the care we provide. Technology can help, but the future belongs to the students who are joining Jefferson’s initiative.”

The project began in 2014, when the Camden Coalition, Primary Care Progress and the Association of American Medical Colleges created a curriculum to educate students attending 24 institutions across the country about hotspotting, with support from the Robert Wood Johnson Foundation. In 2016, Jefferson added elements to integrate it into the University’s own curriculum within each discipline.

For example, one team’s patient deals with an array of health problems, including diabetes, partial blindness, rapidly declining kidneys and a resting heart rate of 130 beats per minute.

“This is a patient whose chart says, ‘difficult, resistant, not willing to be on dialysis, not willing to have the surgery requested by the medical team,'” notes former hotspotter Sean O’Sullivan.

The student hotspotters found their patient’s initial resistance came from a lack of understanding of basic medical terminology and a failure to trust healthcare providers. Gaining their patient’s confidence became the biggest goal for O’Sullivan and his team.

“It’s amazing to see how something small like baking low-carb cookies for them can really make a huge impact on your relationship with that person, particularly the behaviors you’re trying to change,” O’Sullivan says.

The majority of the super-utilizer population struggles with health literacy. For instance, Anne Bono, a physical therapy alumnus of Jefferson and former hotspotter, says her patient’s medical records vastly contrasted with the patient’s own recount of prior doctor visits.

Similar to O’Sullivan, Bono and her team also understood that any change for their patient, who had a primary diagnosis of diabetes, only would come after they earned her trust.

“It took two or three home visits of talking and learning more about her for her to open up and feel comfortable,” Bono says.

After building an authentic healing relationship, their time together went far beyond helping with health literacy issues, she says. Her team quickly realized their patient battled extreme social isolation.

“She said there were days when she hadn’t left her house,” says Bono, who with her team set up a tour of a nearby senior center for their patient. “She was very interested in the religious group and exercise classes. She definitely came out of her shell.”

Both O’Sullivan and Bono say through this experience, it changed their perception of what a patient-provider relationship should look like.