Four genes have been identified which work together to cause cleft lip and palate, in an international research collaboration with researchers from UNSW Sydney and the University of Washington.

The genes, associated for the first time with cleft lip and palate, encode proteins that work together in a network, providing important insights into the biological basis of one of the most common physical malformations. The NHMRC-funded project was led by Associate Professor Tony Roscioli from Neuroscience Research Australia (NeuRA), UNSW Sydney and Sydney Children’s Hospital, Randwick; and Professor Timothy Cox, from Seattle Children’s Research Institute and the University of Washington School of Medicine in the USA.

Variants in these genes were found to account for 15 per cent of the families who took part in the study and in nearly 3 per cent of a second, larger group of smaller families and isolated cases. Published in the American Journal of Human Genetics, the study provides the first evidence that a significant number of non-syndromic clefts have a single gene basis and not a complex basis as previously thought.

Associate Professor Tony Roscioli said cleft lip/palate is one of the most common human malformations, occurring in one in 800 children.

“That equates to about 250 Australian children each year and one affected child born every three minutes worldwide,” said Associate Professor Roscioli.

“What we were seeking to identify in this study was whether single genes could cause a cleft lip or palate in families where there were multiple affected people. 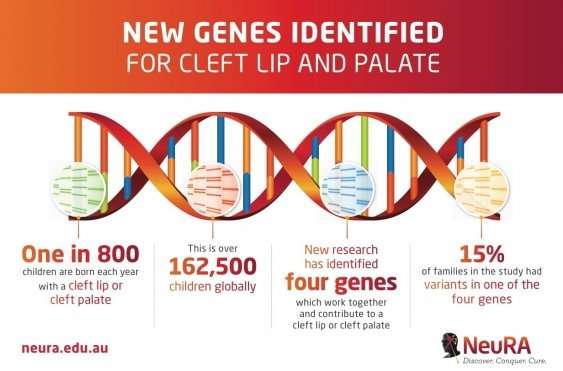 “Knowing the genes and the way these impact lip and palate formation opens the door for further research to understand how these genes work and to develop treatments.”

Commenting on their breakthrough, Professor Timothy Cox said prior studies had focused on using large numbers of affected individuals without an obvious family history, searching for common genetic variants that are associated with an increased risk of a child being born with a cleft.

“We reasoned that non-syndromic cleft lip and palate occurring in families is more likely to be caused by a single rare variant that we can pinpoint using available new sequencing technologies,” said Professor Cox.

“The genetic pathway that emerged from these data gathered through collaboration with clinical teams from around the world is arguably one of the most significant advances in cleft lip and palate genetics in the last 15 years.”

Cleft lip and cleft palates are repaired with corrective surgery. Future research will further investigate the biology and link the findings to future potential therapies. These discoveries will allow geneticists to provide more accurate information to families.

“Importantly, we also showed that some affected individuals in this study had a gene variant which was inherited from neither parent – that is, it likely arose spontaneously in the affected individual during early development – and therefore the parents were able to be reassured of a very low chance of having another affected child,” A/Prof Roscioli said.

Associate Professor Tony Roscioli is a specialist in clinical genetics at the Sydney Children’s Hospital and leads the Sydney Partnership for Health Education Research and Enterprise (SPHERE) GenomeConnect clinical academic stream. At NeuRA he leads the Centre for Research Excellence in Neurocognitive Disorders where he endeavours to transform the diagnosis and management of intellectual disability through genomics.