Nonsteroidal anti-inflammatory drugs (NSAIDs) are among the most commonly used drugs in the world, for the relief of pain, fever, and inflammation. Some of the conditions for which they are useful include arthritis, dysmenorrhea, gout, migraine, and acute injury caused by trauma. 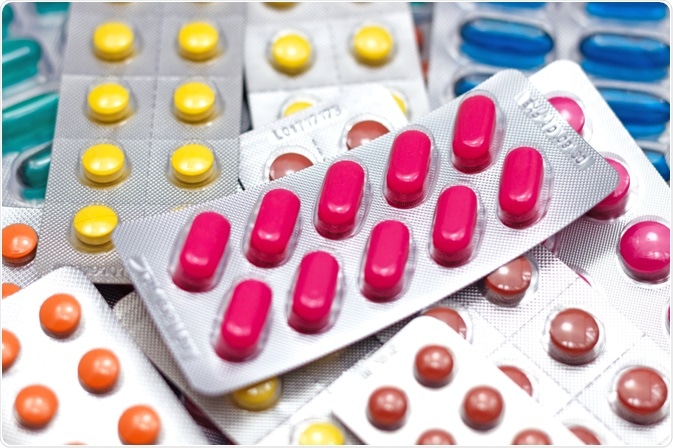 What are the types of NSAIDs?

Based on chemical structure and the mechanism of inhibition, NSAIDs are classified as:

Both oral and topical formulations are available. The latter is used to relieve ligament, tendon, and muscle pains, as well as osteoarthritis pain.

Parenteral NSAID formulations are also available for a more prolonged and potent pain-relieving and antipyretic effect, especially the former, as an alternative to opioids.

How do NSAIDs act?

NSAIDs all act by inhibiting the enzyme cyclooxygenase (COX), which mediates the conversion of arachidonic acid into thromboxanes, prostaglandins, and prostacyclins, which are the molecules that trigger inflammation. All these are fatty molecules called eicosanoids.

Thromboxanes are involved in platelet adhesion, while prostaglandins cause vasodilation and increase the hypothalamic thermostat’s set-point to induce fever. They also antagonize pain pathways.

The COX enzyme has two forms, COX-1 and COX-2. The first is expressed in the body at all times, being essential for the health and integrity of the gut mucosa, kidney function, and platelet aggregation. COX-2, however, is expressed only during inflammation.

While most NSAIDs are non-selective COX-1 and COX-2 inhibitors, newer NSAIDs inhibit only the latter and are thus said to spare the gastric mucosa, unlike the non-selective molecules. Thus, they differ in the pattern of adverse effects.

With the non-selective NSAIDs, gastric effects such as nausea, bloating, stomach pain, diarrhea, constipation, vomiting, heartburn, or indigestion are most common and well-known.

These effects occur because NSAIDs prevent the formation of prostaglandins with their protective effect on the gastric mucosa. This is especially obvious in patients with a history of peptic ulcer disease, for whom selective COX-2 inhibitors are recommended. Taking the tablets with food, an antacid, or milk, may help prevent such symptoms.

Headaches, dizziness, swelling of the ankles because of salt and water retention, and hypertension over the long term with prolonged use, are other side effects.

Esophageal ulcers may also occur, or rectal irritation, due to the local effect of the drug, if the tablets are not washed into the stomach or if suppositories are used, respectively.

Renal damage is due to the inhibition of prostaglandins that are implicated in renal blood flow and is more likely in patients with pre-existing renal disease. The outcomes may include acute renal injury, fluid and electrolyte imbalances, and renal papillary necrosis, and nephrotic syndrome.

Hepatic complications are uncommon, but antiplatelet activity is seen with some non-selective NSAIDs, notably with aspirin. In fact, aspirin at low doses is used as a blood thinner, to reduce the risk of heart attack and stroke in high-risk patients. However, other NSAIDs are better known for increasing the risk of these events if used daily over a long period. In both cases, regular medical supervision is a must.

This may lead to hemorrhage from the gastrointestinal tract or operative site. This is more likely in patients with peptic ulcer disease, or clotting defects due to impaired platelet activity, such as hemophilia, thrombocytopenia, or von Willebrand disease.

Urticaria, or bronchospasm, or other allergic reactions, are also commonly reported. Topical use may result in localized inflammation.

Patients on NSAIDs should inform their doctor or pharmacist if they have swelling around the ankles, blackish stools, or coffee-colored vomit. Unusually colored or cloudy urine, urinary retention, or a decrease in urine volume should also alert the patient to a potential complication of NSAID use.

Blurred vision, sensitivity to light, ringing in the ears, severe headache, or weakness of one side of the body, are red flags indicating brain-related complications.

Swelling around the mouth, lips, tongue, ankles, and feet, hands, or eyes are all signs of a potential allergy or kidney complications. Itching, peeling skin, or redness may also warn of allergy. So also wheezing, difficulty in breathing, or a troublesome cough, or palpitations/ rapid heartbeat, or chest pain, are suggestive of an anaphylactoid reaction to this drug category.

Bruising or bleeding may suggest anti-platelet actions. Severe back pain, fatigue, muscle pain, and extreme fatigue are also warning signs that the doctor should be informed about.

Who is at risk for NSAID-linked complications?

Some people are at more than average risk of serious complications with NSAID use. They include:

To reduce this risk, patients using any other drugs, including herbal formulations, or OTC drugs, should tell the doctor before using NSAIDs. The lowest dose and the shortest course of treatment should be used.

Other pain management options should be discussed. Medications or other means to reduce the side effects should be explored.

Some of the toxicities often seen with NSAID use include gastrointestinal bleeding, hypertension, liver and kidney damage, and neurologic symptoms such as drowsiness, confusion, nystagmus, blurring of vision, double vision, and headache.

Acute overdoses may not cause symptoms. However, metabolic acidosis, coma, convulsions, and acute renal failure.

Since some over-the-counter medications also contain NSAIDs, people who are using such medicines should inform the doctor, nurse, or pharmacist before a surgical procedure or beginning to use a new medicine.

When are NSAIDs contraindicated?

What are NSAIDs used for?

Most often, NSAIDs are used for inflammatory conditions, including acute or chronic arthritis or tendinitis. Migraines, other acute painful conditions, postoperative pain relief, and fever, are other common indications for short-term NSAID use. Long-term use is chiefly for chronic joint conditions.

Precautions in the use of NSAIDs

Though NSAIDs are often available over the counter, and in consequence are widely used, healthcare providers and pharmacists should take care to make the patient aware of the associated risks. When prescribed, the dosage should be carefully titrated to allow high efficacy with the lowest chance of adverse effects.