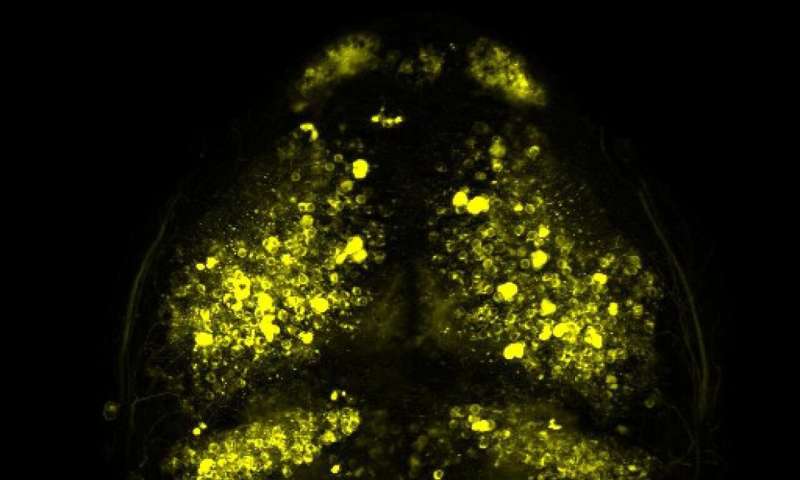 Luke Lavis has spent years developing fluorescent dyes in every color of the rainbow. The super-bright, long-lasting dyes have been used in labs around the world and have helped make Nobel Prize-winning microscopy advances possible.

Not all of the team’s dyes have been absolute winners. Some are made just to showcase new methods or test out specific hypotheses, and sometimes they don’t glow in colors optimal for bioimaging, says Lavis, a Senior Group Leader at the Howard Hughes Medical Institute’s Janelia Research Campus. But for Group Leader Eric Schreiter, one of these “bonus” dyes—one Lavis’s team made just to round out the spectrum—was exactly right. The misfit dye is now a cornerstone of a powerful new brain imaging tool developed in Schreiter’s lab.

In lab tests using Voltron, HHMI Investigator Adam Cohen was able to watch neurons light up in the spinal cord of developing zebrafish. “It was very exciting to see neural activity in real time!” says Cohen, who is based at Harvard University and was not involved in the study.

The Janelia team has already sent Voltron components to more than 100 other labs who have requested the tool after a preprint was published on bioRxiv. “Our philosophy is to make the tools we develop as broadly available as possible, as soon as possible,” Schreiter says. 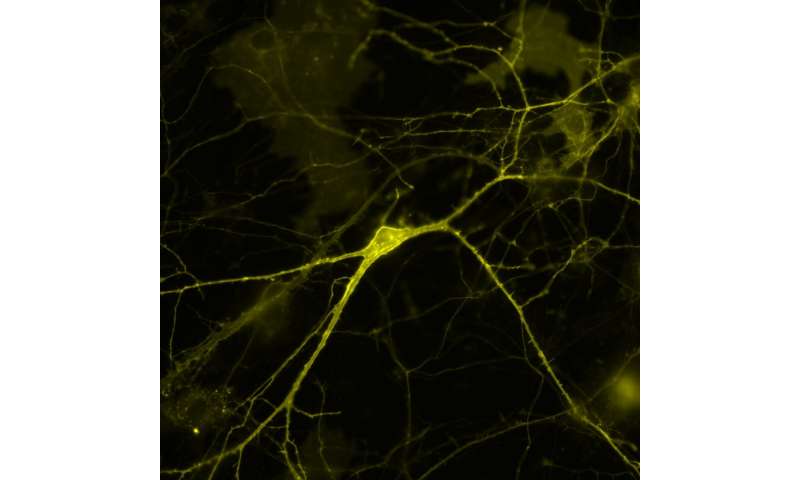 Scientists eavesdropping on neural conversations have a variety of imperfect ways to get the intel they need. Every neural message comes with a rapid voltage change: the balance of electrical charges between the inside and outside of the cell briefly shifts before returning to normal.

Sticking electrodes—pieces of wire or glass—into neurons is one classic way to measure those voltage changes. But hooking up electrodes can be cumbersome, Schreiter says, and it’s hard to monitor lots of individual neurons at once.

Other techniques use fluorescent molecules to view neurons’ ion levels, or rely on fluorescent proteins, which quickly lose their glow. Voltron instead uses an ultra-bright synthetic dye that emits ten times more light than fluorescent proteins. For scientists in the field, the advance makes an idea that’s long been appealing—directly watching voltage changes in living animals’ neurons—finally feel practical and within reach.

Janelia Group Leader Glenn Turner, for instance, has gingerly inserted electrodes into individual fruit fly brain cells for years. He’s been a devotee of the technique, he says, but Voltron lets him monitor multiple cells at once for 10 to 15 minutes at a time without clunky electrodes—and even distinguish signals from neighboring neurons.

“With Voltron, I’m one step closer to throwing out my electrode,” Turner says.

Tools of the trade

Voltron, which Schreiter and Lavis named as a nod to the ’80s cartoon super robot, is a modular system made from a dye molecule and a specially engineered multi-part protein.

Voltage-sensitive dyes have been used for decades, but in the brain, these molecules spread everywhere, creating a confusing cacophony of fluorescence. You can’t differentiate one neuron from another, Schreiter says.

Like the giant robot in its namesake cartoon, which forms when five robot lions work together, Voltron gains power from its individual parts coming together into something bigger, Lavis says. Scientists can “form Voltron” by applying the special dye to animals engineered to have the dye-grabbing protein in certain neurons of interest.

The team has engineered mice, fly, and zebrafish brains to contain this special protein. Voltage changes from a signaling neuron alters the protein’s behavior, making the dye molecules brighten and dim with millisecond precision. When scientists put those animals under a microscope and shine light on them, the dye emits colorful light that can be captured in videos.

Figuring out how to get Voltron’s different parts to work together took some finessing, Schreiter says. Ahmed Abdelfattah, a neuroscientist at Janelia, tested numerous variations of engineered protein/dye combinations. Most worked in cells grown in petri dishes, he says, but one in particular stood out in living animals. That’s the version that the team has been fine-tuning and testing further.

Scientists can currently use Voltron with light-sheet microscopy and other kinds of light microscopes. Schreiter and Abdelfattah would like to develop a Voltron variation that also works with two-photon imaging, a higher-resolution microscopy technique.