Cell differentiation is a widely studied phenomenon forming the basis of all developmental processes including fetal growth and bone fracture healing. A series of recent studies indicates the emerging role of chondrocyte-to-osteoblast transdifferentiation during bone tissue formation, known as endochondral ossification (replacing cartilage with bone).

While transdifferentiation is not a new phenomenon and occurs when mature cells switch from one differentiated phenotype to another, new data have identified three models for chondrocyte (cartilage) to osteoblast (bone) transdifferentiation during fracture healing. Now writing in Bone Research, Patrick Aghajanian and Subburaman Mohan have dissected the three emerging models and categorized them to better understand the process of bone building. The new knowledge will allow bioengineers in regenerative medicine to advance the molecular basis of bone repair.

The typical process of replacing cartilage with bone is divided into primary and secondary pathways, beginning with a template of rapidly proliferating immature chondrocytes that secrete a collagen matrix. In the primary process, chondrocytes undergo differentiation to form the bone matrix, facilitate bone forming cells (mesenchymal stromal cells) to enter the process and differentiate into osteoblasts/osteocytes during embryogenesis, while the chondrocytes themselves become hypertrophic to undergo apoptosis. The secondary process occurs similarly but post-natally, during which immature chondrocytes become hypertrophic and undergo apoptosis, and the vasculature invades to transport marrow, mesenchymal stem cells and osteoclast precursors to initiate bone formation at the center and extend peripherally. 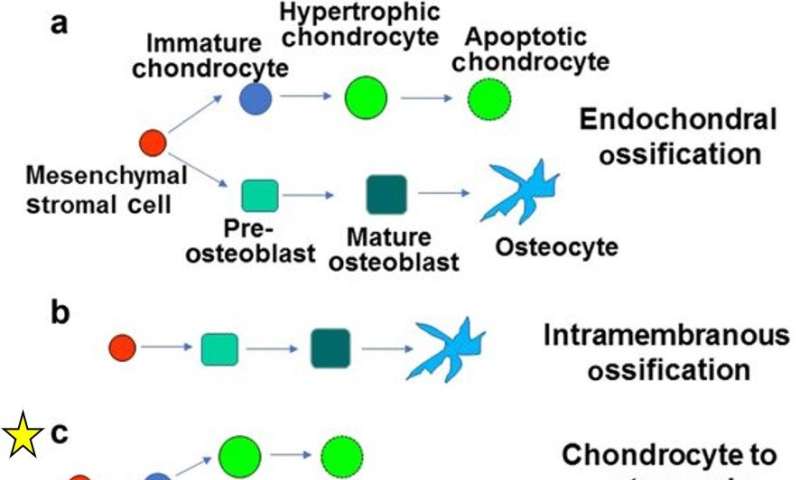 The process of endochondral ossification is also involved during natural bone fracture healing. The authors categorized the models of bone formation, including the canonical and transdifferentiation pathways:

The researchers note that understanding the molecular basis of chondrocyte-to-osteoblast transdifferentiation during endochondral ossification is clinically relevant since: