Apparently there is a bug going around. Local and national press are reporting unusually high numbers of people suffering with diarrhoea and vomiting in Britain this summer. The reports suggest that this is a short-lived illness, with a sudden onset, but nonetheless very unpleasant.

Is it a norovirus outbreak? Public Health England (PHE) reassures that their laboratory data on norovirus is within expected levels for the time of year. So what’s going on?

The biggest difficulty is that only a small proportion of those who fall ill will seek medical help and, of those, even fewer will supply a sample for analysis to determine the cause of their illness. Of course, this may be a good thing. If it is norovirus then it’s highly infectious, and the last thing anyone wants is for it to be brought into a setting where it can infect other, possibly vulnerable people.

So the advice is stay away from hospitals and GP surgeries unless the symptoms are more severe, such as bloody diarrhoea, or have persisted for longer than three days.

On the trail of the disease

Without a sample, we cannot be sure that norovirus is responsible. There are other viruses which cause sudden onset diarrhoea and vomiting, so symptoms alone aren’t enough for a diagnosis.

There are criteria that can be used to determine the likelihood of an outbreak being norovirus however. Known as “Kaplan” criteria, they include the absence of a bacterial cause, vomiting occurring in 50% or more of the cases, an incubation period of 24-48 hours and an illness duration of around 12-60 hours.

These criteria are specific to outbreaks not individual cases and given that the latest reports of the disease are occurring in the community rather than in healthcare settings, it is highly unlikely samples will have been taken to definitively diagnose norovirus, or rule out another cause.

So is there really no serious norovirus outbreak, as PHE says? Their own surveillance suggests that there has been a rise in the number of calls complaining of diarrhoea and vomiting to telephone health helplines, mostly associated with young children. But this is surveillance of symptoms appearing among the public, it tells us nothing of what pathogens might be present.

But we must also be careful of putting all of our trust in laboratory reports of norovirus, as national lab data are mostly from older people aged 65 or over and so are representative mainly of what is going on in care homes and hospitals, rather than what is happening in the community in real time. As it takes time after any outbreak starts for samples to be submitted for testing, there is also always a lag between laboratory reports of norovirus and community activity. 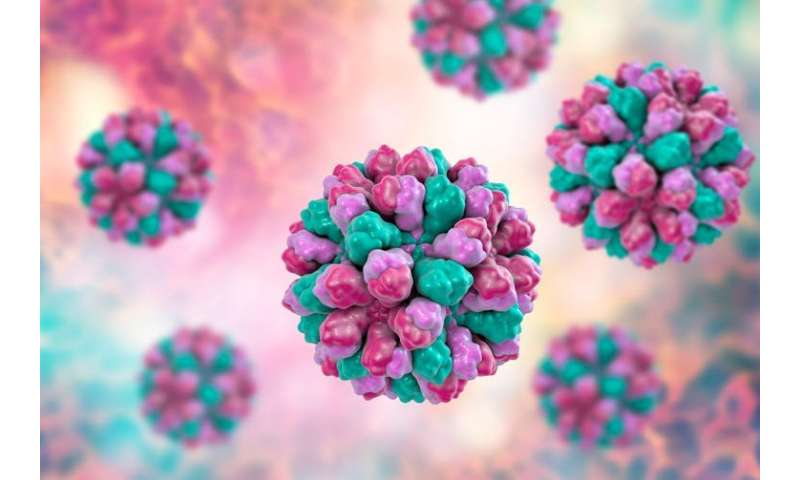 Worse ahead this winter?

Norovirus infections can occur at any time of the year, but happen most often during the winter months – hence its old name “winter vomiting disease”. Norovirus activity can also be localised – there might be increased activity in one area but not in others.

Unusual summer activity has been reported in the past. It happened in the spring and summer of 2002 and was later associated with the emergence of a new strain of the virus. The midsummer peak of 2002 was notable compared to the previous six years when there was a considerable decline in norovirus activity during the summer months.

Following the increased summer activity of 2002, there were more cases than usual reported in the following winter, higher than any of the preceding years. Now, 16 years later, are we on the cusp of a new viral strain? And will it mean a winter crisis for the NHS?

At the moment, it’s too early to say what is going on this summer and what will happen in the near future. What this does highlight, however, is the need to establish surveillance which considers various sources of reporting.

Relying on one source for tracking an underreported pathogen, such as using laboratory reporting or health helpline monitoring, won’t give a real time picture. There is a need to develop a wider and more integrated approach for the surveillance of norovirus.

Using indicators from different sectors, such as school absences and social media posts about symptoms, as well as population reporting methods, such as the volunteer “flusurvey” scheme, there is the potential to improve real-time surveillance.

It is not likely that any testing will detect changes in the genome of norovirus until enough samples have been received by PHE and this will be some time after the event in any case.

That said, surveillance is not just an exercise in counting – it is also there to provide information that can be acted upon. It might come to nothing, as in the winter of 2012/2013 when there were numerous news reports of greater than expected norovirus cases in the UK.

That winter turned out to be fairly ordinary and was only exceptional for how early in the season a flurry of confirmed cases came. This was also later found to be associated with another variant of the virus which, happily, did not lead to the busy season that was predicted at the time.