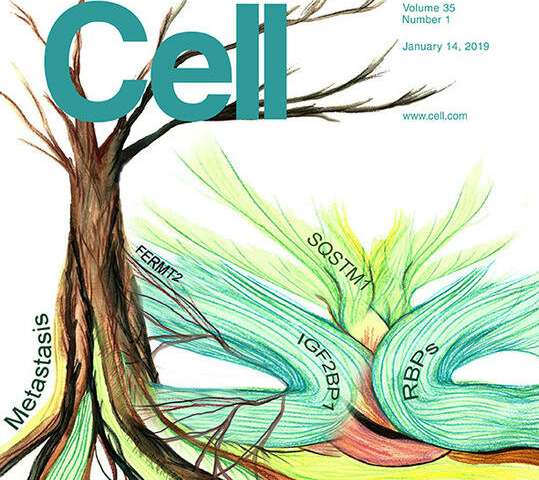 Cancers most commonly arise because of a series of two to five mutations in different genes that combine to cause a tumor. Evidence from a growing number of experiments focused on truncal mutations—the first mutations in a given sequence—suggests a new direction in understanding the origins of cancer.

In a paper published today in Cancer Cell, authors Arnold J. Levine of the Institute for Advanced Study and Nancy A. Jenkins and Neal G. Copeland, both of The University of Texas MD Anderson Cancer Center, present a new perspective of these data, highlighting two important variables: 1) the sequence of mutations that leads to the formation of a cancer, and 2) the cell type in which this occurs, providing a new meaningful insight into the growth, properties, and outcomes of these tumors. The concepts developed in this paper suggest new avenues for future experimentation, help to explain previously unclear observations, and recommend new methods to impede cancer development, including blocking the defined sequence that is required to produce a tumor.

Levine explains, “This paper does not publish any new experiments. Rather, it outlines a new way to understand and interpret existing results, and in so doing helps to explain previously confusing facts, outlining the differences in developing cancers at young or older ages, and emphasizing the important role of inherited predispositions to developing cancers. The publication suggests entirely new paths to studying the origins of cancers over a lifetime.”

The Cancer Cell paper collects numerous examples of how the order of mutations affects the outcome of the tumor and its response to therapy. This paper highlights the opportunity for researchers to look at hundreds of these evolutionary trees with different orders of mutations that will perhaps provide a fingerprinting method that could reveal information about a cancer’s type, growth, and potential to invade surrounding tissues at the time of diagnosis so that treatments can be planned. With an understanding of these complex mutational chains, pharmaceutical and biotechnology firms could begin to consider interventions to inhibit particular links within a mutational sequence that could block the further development of a cancer. Drugs directed against the first and second mutational outcomes may completely prevent the third and fourth mutations from ever being selected for in a clone of cells. The focus in this paper is thus on cancer prevention, not treatment.

Many different kinds of cancers arise by the random accumulation of mutations (mistakes in the information in a gene) over a lifetime. For instance, past research has shown that colorectal cancer is associated with mutations in the following four distinct genes: APC, RAS, TGF-beta, and p53, each of which contributes an error in different functions being carried out by the cells in one’s colon. Copeland and Jenkins have demonstrated that colon cancer develops most rapidly when the APC gene is mutated first, the RAS gene second, the TGF-beta gene third, and the p53 gene last. Mutations in the first three genes produce benign tumors. Only when all four genes are mutated is there a malignant tumor. But mutations occur randomly over a lifetime. The order is imposed by Darwinian selection. An APC mutation permits a clone of cells to grow (forming a benign polyp). When an RAS mutation occurs in this clone of cells the polyp enlarges, increasing the number of cells with these two mutations and, therefore, the probability that a cancer may arise. Thus, the ordering of these random mutations is selected for by the viability and replication of cells with this order of mutations. The Levine laboratory showed the same need for an order of mutations in five different genes to produce a different cancer: T-cell lymphomas. It was these two papers, published approximately three years ago, that started Copeland, Jenkins, and Levine exploring whether this was the pathway in the development of all cancers; “Order of Mutations and Cell Type Matters”.