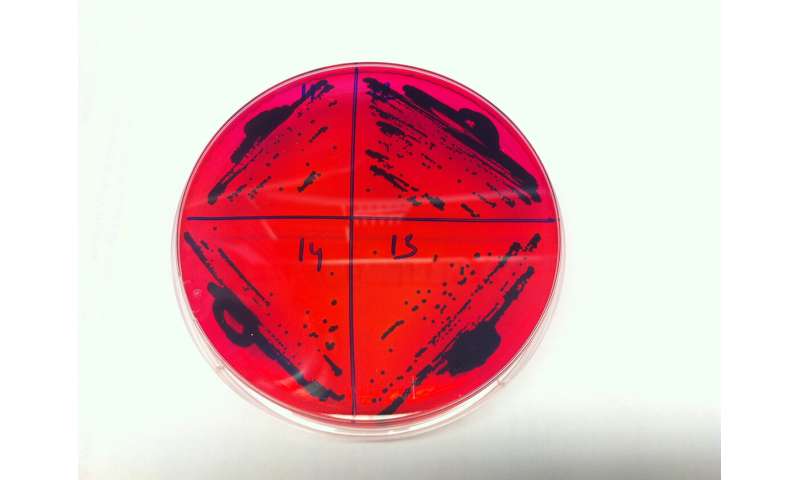 Researchers from North Carolina State University have found a gene that gives Salmonella resistance to antibiotics of last resort in a sample taken from a human patient in the U.S. The find is the first evidence that the gene mcr-3.1 has made its way into the U.S. from Asia.

There are more than 2,500 known serotypes of Salmonella. In the U.S., Salmonella enterica 4,[5],12:i:- ST34 is responsible for a significant percentage of human illnesses. The drug resistance gene in question—known as mcr-3.1—gives Salmonella resistance to colistin, the drug of last resort for treating infections caused by multidrug-resistant Salmonella.

“Public health officials have known about this gene for some time,” says Siddhartha Thakur, professor and director of global health at NC State and corresponding author of the research. “In 2015, they saw that mcr-3.1 had moved from a chromosome to a plasmid in China, which paves the way for the gene to be transmitted between organisms. For example, E. coli and Salmonella are in the same family, so once the gene is on a plasmid, that plasmid could move between the bacteria and they could transmit this gene to each other. Once mcr-3.1 jumped to the plasmid, it spread to 30 different countries, although not—as far as we knew—to the U.S.”

Thakur’s lab is one of several nationally participating in epidemiological surveillance for resistant strains of Salmonella. The lab generates whole genome sequences from Salmonella samples every year as part of routine monitoring for the presence of antimicrobial-resistant bacteria. When veterinary medicine student Valerie Nelson and Ph.D. student Daniel Monte did genome sequencing on 100 clinical human stool samples taken from the southeastern U.S. between 2014 and 2016, they discovered that one sample contained the resistant mcr-3.1 gene. The sample came from a person who had traveled to China two weeks prior to becoming ill with a Salmonella infection.

“This project proved the importance of ongoing sequencing and surveillance,” says Nelson. “The original project did not involve this gene at all.”

“The positive sample was from 2014, so this discovery definitely has implications for the spread of colistin-resistant Salmonella in the U.S.,” Thakur says. “Our lab will continue to try and fill in these knowledge gaps.”