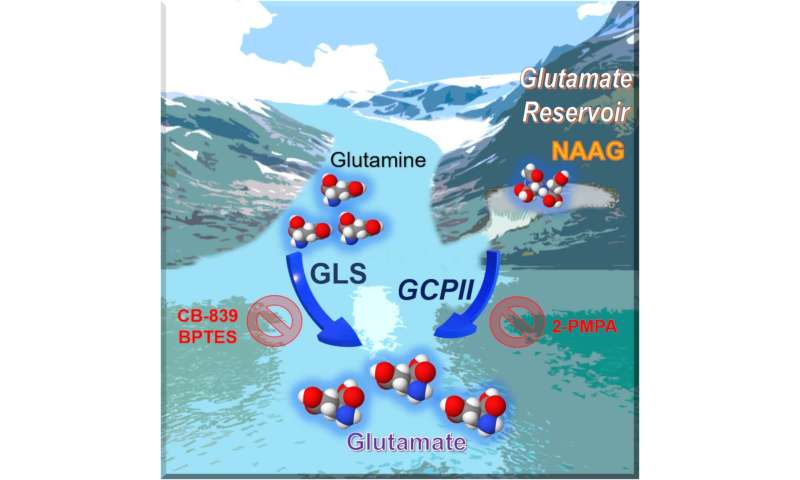 Using human cancer cells, tumor and blood samples from cancer patients, researchers at Johns Hopkins Medicine have uncovered the role of a neurotransmitter in the spread of aggressive cancers. Neurotransmitters are chemical “messengers” that transmit impulses from neurons to other target cells.

The work, described in the April 9 issue of the journal Cell Reports, found that this neurotransmitter, called N-acetyl-aspartyl-glutamate (NAAG) NAAG is more abundant in cancers with a tendency to grow and spread rapidly—or so-called higher grade cancers—than in lower grade tumors, making it a potential marker for tumor progression or regression during cancer therapy, the researchers say. The experiments also demonstrated that NAAG is a source of glutamate, a chemical that cancer cells use as building blocks to survive, in tumors that express an enzyme called glutamate carboxypeptidase II (GCPII). The group also discovered that stopping the GCPII from being active by using a drug called 2-PMPA to treat human ovarian tumors implanted in ovaries of mice, reduced tumor weights and glutamate concentrations. They noted that targeting both GCPII and glutaminase, the enzyme that converts glutamine to glutamate, resulted in a more substantial tumor reduction in patient-derived pancreatic cancer tumors implanted in pancreas of mice, since it attacked the production of glutamate from both glutamine and from NAAG.

“Our study suggest that NAAG serves as an important reservoir to provide glutamate to cancer cells through GCPII, when glutamate production from other sources is limited,” says senior study author Anne Le, M.D., H.D.R, an associate professor of pathology and oncology at Johns Hopkins. GCPII inhibitor is found to be well-tolerated in clinical trials for pain, so we should be able to move it into clinical trials for cancer therapy quickly.”

Le’s team then looked to see whether overall levels of NAAG in human patients correlated with the grades of their tumors. Measuring concentrations of NAAG in blood plasma samples from brain tumor patients, the investigators found significantly higher NAAG concentrations in samples from patients who had glioblastoma multiforme, the most aggressive brain cancer, than in patients who had gliomas or meningiomas.

“Together, these findings strongly link plasma concentrations of NAAG with tumor growth rates, and suggest that measurements of NAAG in peripheral blood should be further explored for timely monitoring of tumor growth during cancer treatment,” Le says. “These results don’t make NAAG a potential diagnostic marker, but a prognostic marker, a potentially valuable way for noninvasive assessments of tumor progression.”

Previous studies directed by Le, and described in 2012 in the journal Cell Metabolism, and in 2016 in the journal Proceedings of the National Academy of Sciences found that glutamine metabolism plays an important role in cancer growth.

“Seven years ago, we found that glutamine was a big deal in cancer metabolism, and inhibiting the conversion of glutamine to glutamate was the right target to curb cancer growth,” Le says. “It turns out, that’s correct. But it’s not enough, because cancer cells have another way to make glutamate through this hidden reservoir. Targeting both pathways could improve cancer treatments,” she adds.

Do you have prostate cancer? Here’s your guide to treatment options
Recent Posts
HEALTH PROBLEMS