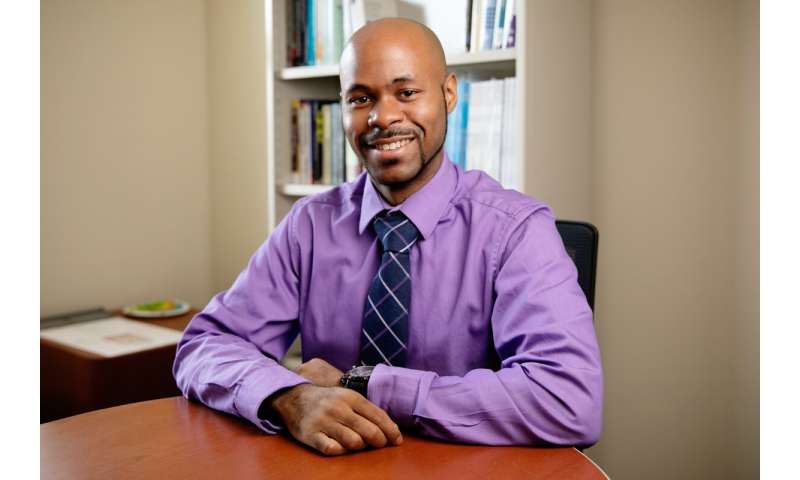 Race-based discrimination and stereotypes are ubiquitous in the online communities and mobile apps that gay and bisexual men use to search for sexual and romantic partners, research indicates.

But because racialized sexual discrimination—also called sexual racism—is a relatively new area of study, researchers currently don’t have a tool for measuring its impact on the well-being of men of color who use these websites, according to University of Illinois social work professor Ryan Wade.

Wade and Gary W. Harper, a professor of health behavior and health education at the University of Michigan, have developed a scale to help researchers better understand how the psychological well-being of ethnic minorities is affected by RSD experiences.

Wade presented their latest research on the topic at the annual meeting of the American Public Health Association in Philadelphia on Nov. 6. He and Harper are the co-authors of a new study, a comprehensive review of prior research on RSD that was published recently in the American Journal of Community Psychology.

Wade and Harper found that RSD emerges in a variety of forms and contexts in these online communities and, less often, when men meet potential partners in person. These include prominent statements in users’ online profiles that express inclusionary or exclusionary racial preferences for potential partners.

The researchers note that these race-based preferences—usually expressed by the white majority seeking to exclude people of color—are a common part of the narrative within these online spaces.

However, the degree to which racial and ethnic minorities perceive race-based partner selection as racist gets overshadowed by these personal preference narratives, Wade said.

Whiteness is the hallmark of desirability for some participants in these networks, and some researchers have called race-based partner selection “the new face of racism in online sexual and dating networks of gay/bisexual men,” according to Wade and Harper’s study.

Wade and Harper hypothesize that exposure to these experiences may foment feelings of shame, humiliation and inferiority, negatively impacting the self-esteem and overall psychological health of racial and ethnic minorities.

“We ran a series of focus groups to talk about this phenomenon, to determine the different domains it includes and to identify RSD-related experiences that could be measured,” Wade said.

The scale consists of 60 items that assess a broad scope of unique RSD experiences across all four of the hypothesized domains, accounting for the effect and frequency of these experiences and the perpetrator’s race.

“RSD perpetrated by in-group members—people of their same race—came up as a major point in our focus group discussions,” Wade said. “Participants discussed how being discriminated against by people of their own racial or ethnic group hurt in a unique way, so we wanted to account for that too when developing the scale.”

The overall impact of any given RSD experience is measured by multiplying the frequency and effect scores for each domain, Wade said.

To test the scale, Wade and Harper launched a project called ProfileD, in which they recruited young gay and bisexual black men ages 18-29 through social media to participate in an online survey about their RSD experiences.