“Put your hand on a hot stove for a minute and it seems like an hour. Sit with a pretty girl for an hour and it seems like a minute.” As Einstein once joked, our subjective time deviates, sometimes significantly, from physical time.

This is because the brain has no direct access to physical time and infers time from the neural representation of external events.

Subjective time is believed to be “warped” by the neural energy involved in representing sensory inputs. Its deviation from physical time has mostly been attributed to the sensory properties (e.g., size, luminance, speed, etc.) of external stimuli. But what role, if any, do we the experiencers play in our experience of time?

Psychologists ZHOU Wen, JIANG Yi and their colleagues at the Institute of Psychology, Chinese Academy of Sciences, probed this issue by examining individuals’ temporal perception of social interactions and the variation among individuals, noting the gregarious nature of humans, the ubiquity of social interactions in daily life and the pronounced interindividual differences in social proficiency—a stable personality trait.

As part of this study, participants viewed two sequentially presented point-light motion sequences, one portraying two agents engaging in a face-to-face communicative interaction, the other noncommunicative, in random order (Figure 1). 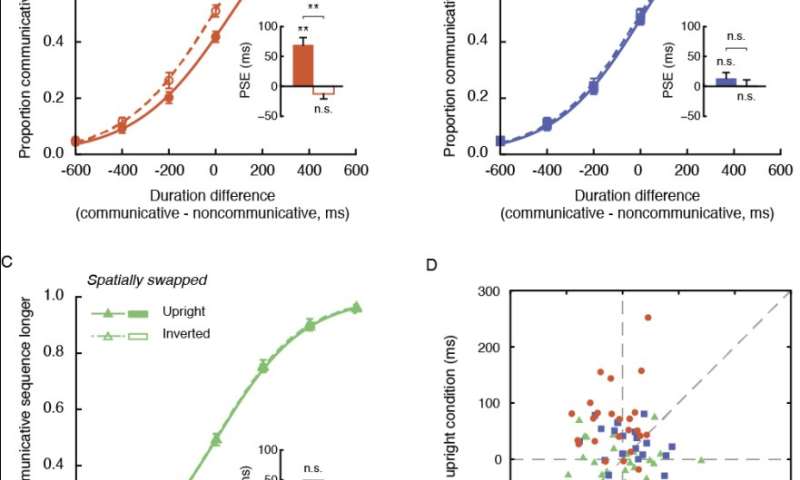 The effect disappeared when the motion sequences were shown upside down, when a temporal lag was inserted in between the original upright acting agents (Experiment 2, Figure 2B), and when the two upright agents in each display were spatially swapped such that they faced in opposite directions (Experiment 3, Figure 2C).

In other words, the temporal compression effect was not due to the spatial-temporal correlation between the moves of the two agents. Could it be a manifestation of the observer’s social proficiency?

The researchers assessed participants’ social proficiency with the Autism Spectrum Quotient and found this to be the case: socially less proficient individuals were less susceptible to the effect than socially proficient ones (Experiment 4). Social proficiency has been linked to one’s endogenous oxytocin level.