A research team based in Japan led by Kanazawa University has demonstrated the effect of osteopontin on hepatitis C virus replication and interferon signaling in cancer stem cells. Their research sheds light on a novel therapeutic target for treating hepatocellular carcinoma.

Hepatitis C virus (HCV) infection is the major cause of hepatocellular carcinoma (HCC) and was estimated to be responsible for 745,000 deaths in 2012. Recently, highly efficient and direct-acting antiviral agents (DAAs) have been able to eliminate HCV from infected livers in more than 90 percent of cases. However, emergence of HCC at a rate of about 1 percent per year is now reported in HCV-infected livers. Therefore, new therapeutic strategies are needed to prevent HCV infection, HCC recurrence, and hepatocarcinogenesis.

Osteopontin (OPN) is a multifunctional cytokine and is involved in normal physiological processes, as well as in numerous pathological conditions, including inflammation, fibrogenesis, and carcinogenesis. In liver diseases, OPN plays an important role in acute liver injury, viral replication, liver repair, fibrosis, and HCC.

Recent work has identified CD44 as the most common marker for cancer stem cells (CSCs) in several human cancers. CD44 has a pivotal role in regulating the properties of CSCs, including their self-renewal, tumor initiation, metastasis, and chemoradioresistance, and OPN reportedly interacts with CD44. 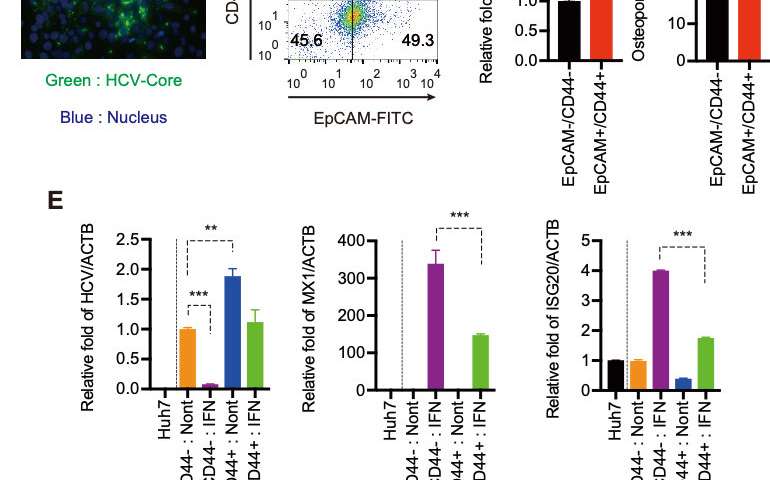 In HCC, enrichment of several stem cell markers, including CD133, CD90, CD13, epithelial cell adhesion molecule (EpCAM), CD44, CD24, and oval cell marker OV6, is reported in certain side populations of CSCs. However, CSCs represent only a minor population of the cancer cells and there is currently no evidence for a role for CSCs in supporting HCV replication. Therefore, identifying the underlying mechanism of HCV pathogenesis and its relationship to CSCs is an important research challenge.

In this study, a group from Kanazawa University evaluated the significance of the OPN-CD44 axis for HCV replication in EpCAM+/CD44+ CSCs, and investigated the role of OPN in the regulation and maintenance of EpCAM+/CD44+ CSCs.

The Kanazawa University group focused its attention on CSCs, as HCC is proposed to develop from CSCs, even though they represent a small part of the HCC cell population. However, HCV replication in CSCs is still poorly understood. This study showed the significance of the OPN-CD44 axis for HCV replication in EpCAM+/CD44+ CSCs.