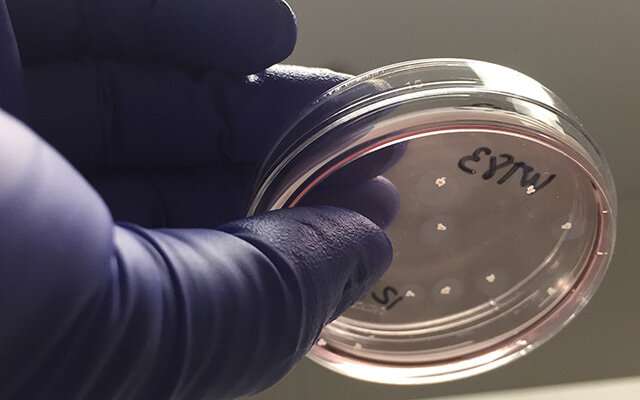 Brain organoids—also called mini-brains—are 3-D cellular models that represent aspects of the human brain in the laboratory. Brain organoids help researchers track human development, unravel the molecular events that lead to disease and test new treatments. They aren’t prefect replicas, of course. Brain organoids do not replicate cognitive function, but researchers can check how an organoid’s physical structure or gene expression changes over time or as a result of a virus or drug.

University of California San Diego researchers have now taken brain organoids one step further, achieving an unprecedented level of neural network activity—electrical impulses that can be recorded by multi-electrode arrays. Using data from babies born up to three-and-a-half months premature, the team developed an algorithm to predict their age based upon EEG patterns. The algorithm then read lab-grown brain organoids the same way, and assigned them an age.

The electrical impulse pattern for nine-month-old brain organoids revealed similar features to those of a premature infant who had reached full-term (40 weeks gestation).

These new optimized brain organoids, described in the August 29, 2019 issue of Cell Stem Cell, may make it possible for researchers to study mental illnesses that aren’t caused by or result in overt physiological changes, but instead involve disturbances in brain cell network activity, such as autism or epilepsy. For many of these conditions, there are no relevant laboratory or animal models.

“We couldn’t believe it at first—we thought our electrodes were malfunctioning,” said co-senior author Alysson R. Muotri, Ph.D., professor of pediatrics and cellular and molecular medicine at UC San Diego School of Medicine. “Because the data were so striking, I think many people were kind of skeptical about it, and understandably so.” Muotri led the study with Bradley Voytek, Ph.D., associate professor of cognitive science in the UC San Diego Division of Social Sciences.

Brain organoid construction begins with a perhaps surprising source: an adult skin sample. In the lab, researchers convert the skin cells into induced pluripotent stem cells (iPSCs). Like most stem cells, with the right cocktail of molecular factors, iPSCs can be directed to specialize into any cell type. In this case, they become brain cells—different types of neurons and glia, for example.

At UC San Diego, brain organoids have been used to produce the first direct experimental proof that the Brazilian Zika virus can cause severe birth defects and to repurpose existing HIV drugs for a rare, inherited neurological disorder. Muotri and team also recently sent their brain organoids to the International Space Station to test microgravity’s effect on brain development—and maybe prospects for human life beyond Earth.

In the latest study, Muotri and colleagues optimized every step of brain organoid construction. For example, they started from single cells, rather than the clumps of cells used in most protocols. They also tweaked the precise timing and concentration of factors added to prompt brain cell organization. There wasn’t a single secret ingredient or innovation, he said, but rather several improvements over time.

The optimization paid off in terms of cellular diversity and cellular network activity. For example, the team detected a particular primate-specific neuron, called a cortical GABAergic neuron, that had never before been generated in a lab dish. According to Muotri, these cells are important players in the sophistication of neural networks.

In humans, oscillations change with age, as brain cell connectivity develops. Newborn baby brains tend to have periods of rest (no waves) between spikes of electrical activity. Those quiet periods get shorter and shorter as the brain develops. In time, brain activity becomes constant, though levels vary. These brain oscillation patterns often correlate with human cognition and disease states.

Muotri said he is often asked about the ethical implications of this work, with questions like: “Are we getting too close to re-creating the human brain?” These brain organoids dramatically differ from human brains in many ways, he explained. For example, they are several times smaller than an adult human brain. They do not have hemispheres or blood vessels. And they are not surrounded by protective skulls or connected to other tissues.

“They are far from being functionally equivalent to a full cortex, even in a baby,” said Muotri, who is also director of the UC San Diego Stem Cell Program and a member of the Sanford Consortium for Regenerative Medicine. “In fact, we don’t yet have a way to even measure consciousness or sentience.”

Muotri’s brain organoids can live for years in the lab, but their activity plateaus at nine months. He said a number of reasons might apply, including the lack of blood vessels or the need for additional neurons to continue maturing.

The better brain organoids can replicate the human brain in the lab, Muotri said, the less researchers will need to rely on animal models and fetal tissue to better understand and treat human disease.